Last time, Nick Adams set off on his Moto Guzzi Falcone 500 for a quick spin around the logging roads of Quebec. This time, the traffic comes closer than is entirely comfortable… 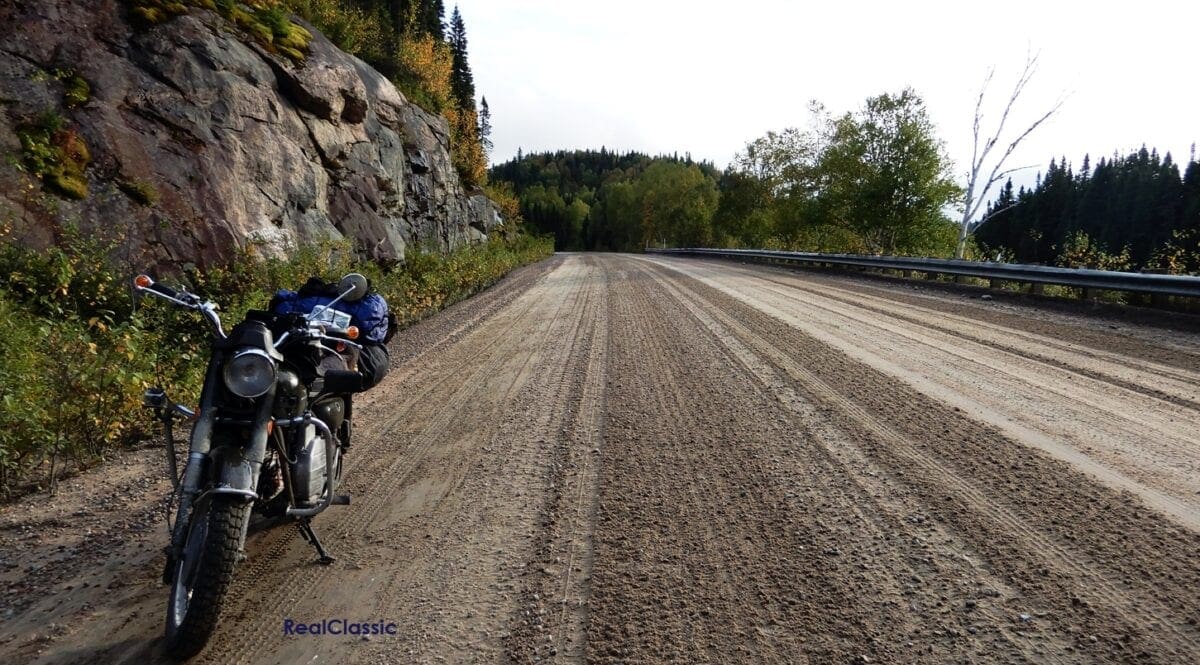 Parent is a typical, small, isolated railway village: a scattering of houses and public buildings bisected by the railway, the heart and focus of the community. I crossed the river and stopped at the gas station / store / liquor store to fill the bike and find something to fill me. The lady at the counter bagged my bread, cheese and wine and in excellent English, directed me to the Hotel Central. I hadn’t realised that there was a perfectly nice municipal campground on the shore of a lake just east of town, but I’m glad I chose the hotel as it turned out to be a chilly and damp night. 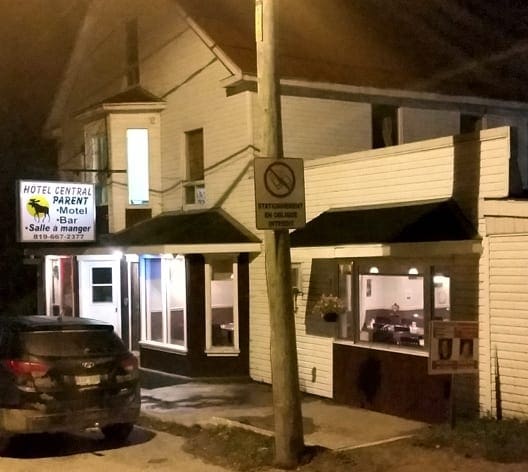 The Hotel Central caters to people working in the region, and was both basic and cheap. For a measly $68, the young woman in the hotel bar furnished me with a key to my room and the promise that both supper and breakfast were included. The room was just that – a room; a bed, a light and a table. The toilet and shower were down the corridor and shared with the other guests. The supper and breakfast were nutritious, filling, and well worth the limited pennies I’d spent on them.

As the sun went down I strolled around the village streets to the accompaniment of the throb of a huge diesel-electric goods train which sat idling on the tracks. I scuffled along the partially paved roads, peering at the flat roofed frame houses, the substantial municipal building with its tall fire tower, and the black and white Catholic church before the light faded and I returned the my room for a dessert of wine and cheese. 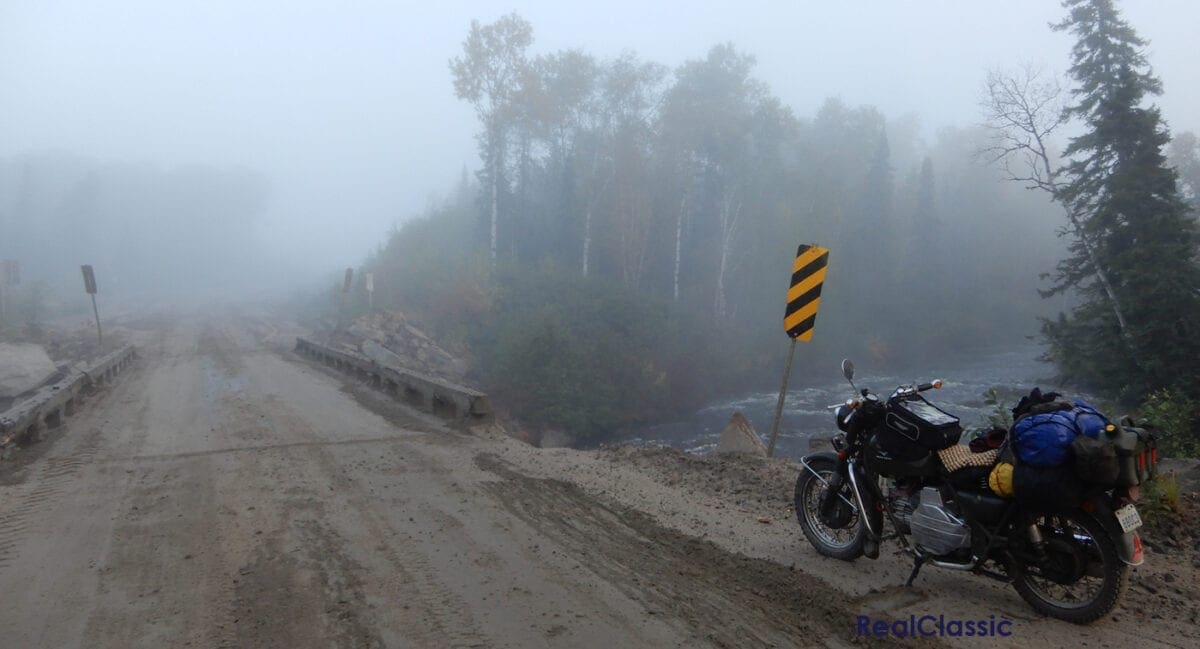 I awoke to be greeted by thick, damp, low-lying morning fog. The haze of the sun was visible above, but at street level it was hardly possible to see more than a few car-lengths ahead. The time I took over breakfast did little to dissipate the mist, but the coffee and bacon and eggs put me in the right frame of mind to ride regardless. Easing carefully through the village streets, I soon found the road to La Tuque and rode gently into the mist. Within moments, both the bike and I were covered in chilly water droplets and my visor was a blur. Wiping it with the back of my gloves proved fruitless: back at home I’d dubbined the gloves to waterproof them, and they left a smear of grease in front of my face. I flipped the visor and rode without, blinking furiously as the water droplets hit my eyes.

This all sounds a bit unpleasant, but really, it wasn’t that bad. I don’t expect to be able to race along on these roads, so any progress makes me happy. My biggest concern was that I might not be able to hear or see any logging trucks coming up behind: my rear lamp and the little bit of conspicuity tape I’d added to the mudguard would be barely visible through the fog. Any trucks coming from the front would be visible in enough time for me to hug the road edge, but I needn’t have worried. I didn’t see any other vehicles until well after the mist had cleared. 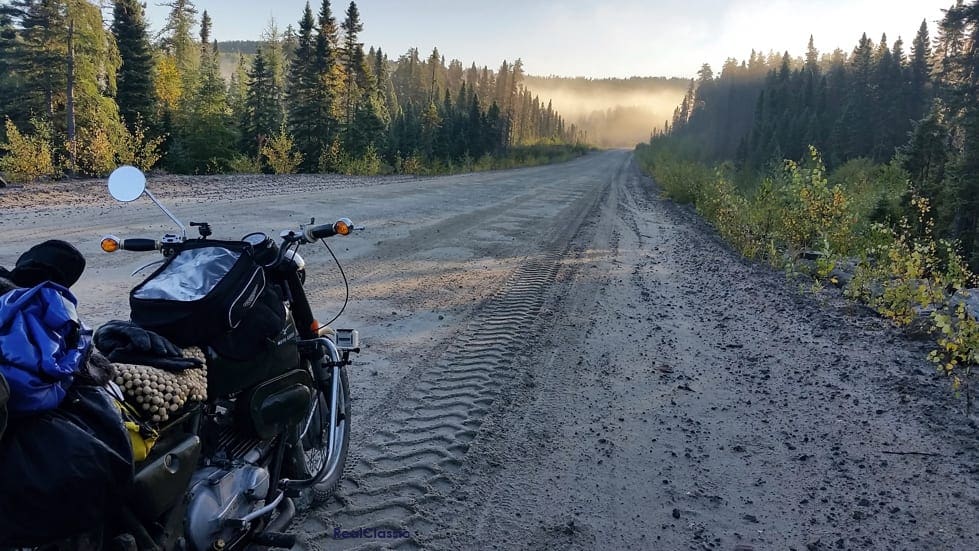 Foggy mornings in the forest are rather magical. From time to time I would see a hint of the shape of the landscape through the mist, and when I stopped, it was as if a blanket of sound deadening insulation had been lowered. At one wooden bridge over a rushing stream, I stopped for a brief break. Other than the tumbling water, the only other sound was a raven, calling to distant friends, but even his voice was blurred by the fog. 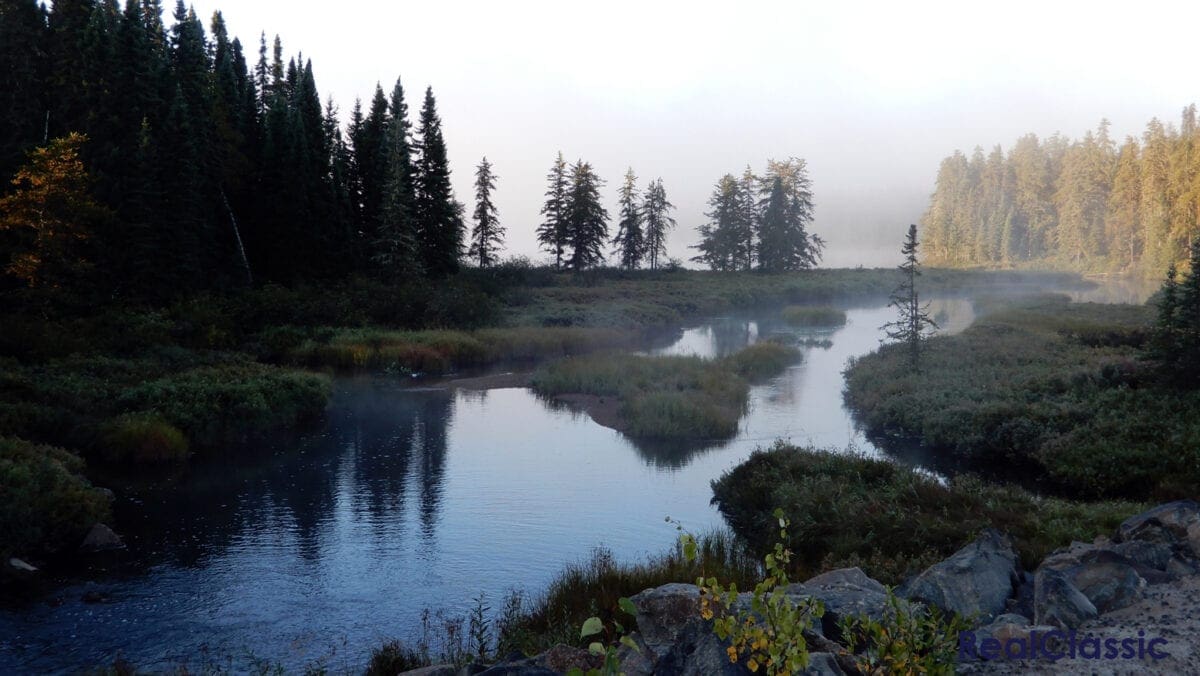 Gradually the mist cleared as the sun rose higher in the sky, until only fragments lingered across the surfaces of some of the lakes or hung as if reluctant to loosen its grip on the deeper valleys. The steady beat of the Nuovo Falcone seemed to compliment my own internal rhythms and I found myself smiling happily as the gravel slipped by beneath the wheels. 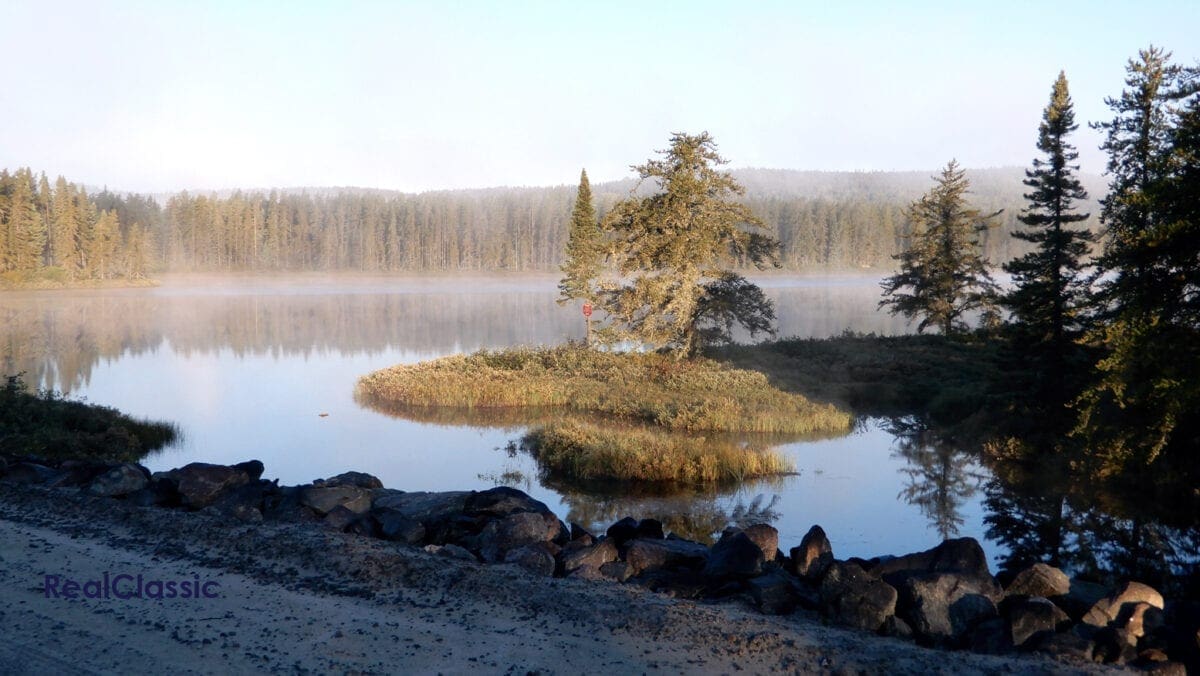 The lifting mist seemed to bring out other road users: one or two logging trucks and the occasional pickup, all travelling at highway speed, sending sheets of gravel dusk skittering my way as the road surface dried. If I saw a vehicle approaching, I would slow down and move over, exchanging the hard-packed centre for the thicker gravel at the road edge. This could be a bit dicey but it kept me well away from the fast moving trucks.

As the morning progressed I began to see that I would soon catch up with a road grader. The gravel was smooth but loose and the potholes were now invisible beneath the freshly scraped surface. Coming over a rise, I saw that the grader and two large water trucks were stopped, blocking the road. I geared down, unexpectedly finding third then second (the gearbox can be a bit tricky), and pulled to a stop to assess the situation. 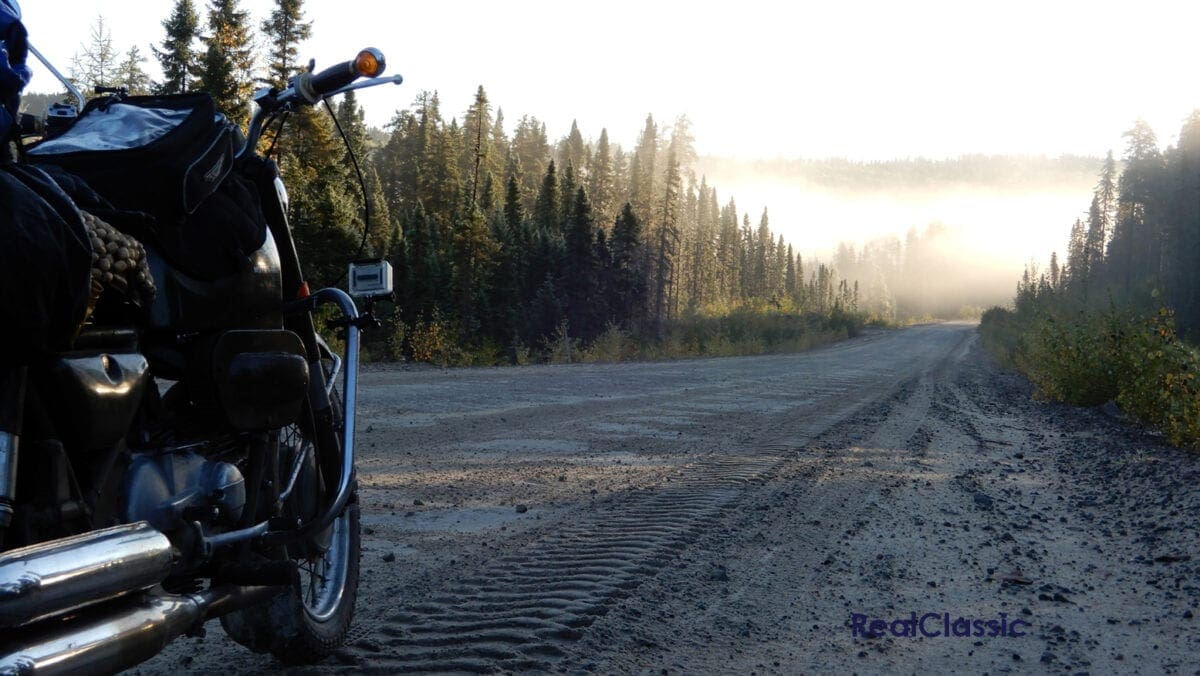 Before I could gather my thoughts, a large 4wd pick-up blasted by inches from my ear, fish-tailed in front of me then skidded to a stop in a cloud of dust on the ditch side of one of the tankers. The driver must have been really hammering, cresting the rise only to find the road blocked. He missed rear-ending me by inches.

Once the grader and tankers cleared the road, we set off again. As I passed him, the pick-up driver gave a sheepish grin, and when he passed me a few moments later, I noticed that he was driving in a far more temperate manner.

After that I checked my rear view mirror a little more frequently.

Next time: another close encounter of the uncomfortable kind, and the long road home…