Moto Guzzi’s Nuovo Falcone is a solidly put-together 500 single. It’s far from fast, but it’s famous for going on forever. That’s just as well. When RC’s Canadian correspondent, Nick Adams, goes for a ‘short trip’ on the unpaved roads around Quebec, the miles soon mount up… 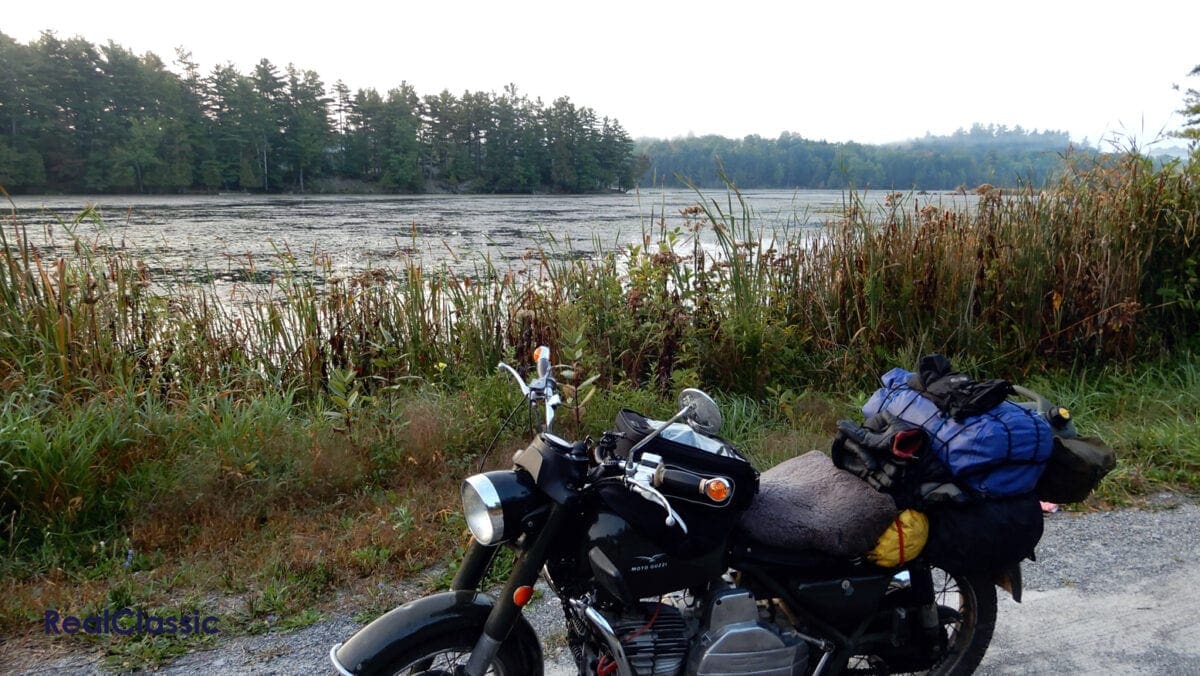 Whenever I ride the Nuovo Falcone I’m always pleasantly surprised at how easily it eats up the miles. Make no mistake, it is slow. In the time I have owned it, I have overtaken less than a handful of vehicles on the open road. It just doesn’t have the get-up and go that one usually associates with motorcycles, but point it in a direction, settle back into the sprung seat, get into the right frame of mind and ride. The miles accumulate under the wheels in an unhurried manner.

The miles were accumulating fast as I headed north for yet another short trip into Quebec, following my usual route through Westport, Perth and Lanark. I know that sounds a bit confusing; there are at least twenty places named Westport around the globe, three of which are in Canada (one in Nova Scotia, one in Newfoundland and Labrador), and Perths and Lanarks are scattered all over the world wherever people of Scottish descent have settled. This group were small towns in eastern Ontario, separated by large tracts of low, rocky, forested hills and plains, areas of swamp and patches of farm land. 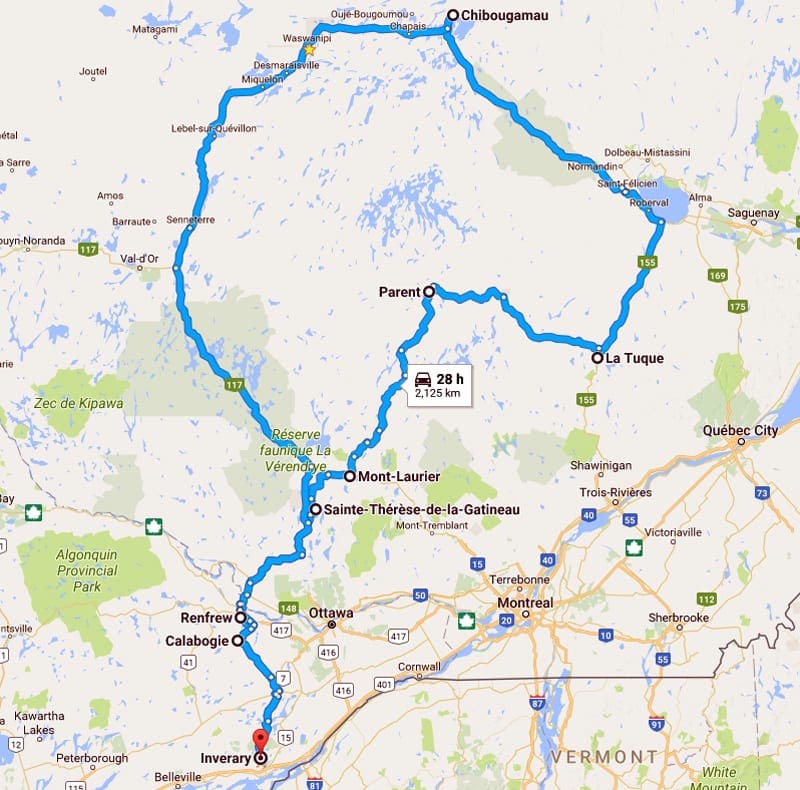 The bike had settled in to its normal pattern of humming along at a reasonable speed on the flat, chugging up any hills at whatever speed it could manage, then breezing down the other side – all the while providing a lovely, mellifluous, yet never intrusive thumping sound track. As usual, it was loaded with camping gear, fuel, tools and spares. It may have looked a trifle overloaded but the actual weight of all the gear was relatively small and had little effect on the handling or performance of the bike. Performance? Well, progress anyway.

Mist had descended as I reached Calabogie. I stopped briefly to catch the atmosphere of the still lake with my camera (I failed miserably) before heading on towards the Ottawa River and the Quebec border. Before that though, I stopped in Renfrew – yes, we’re still in Ontario, not Scotland – to buy a few groceries for the empty road ahead. 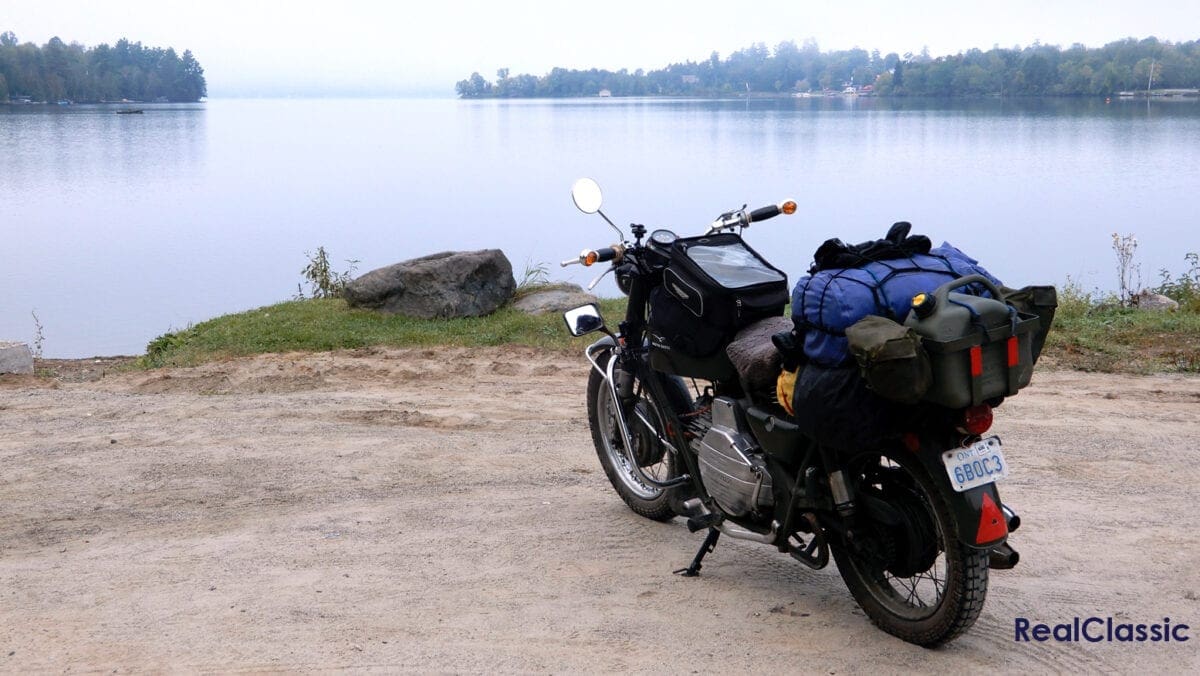 After stowing the goodies with my gear I went through the normal starting routine. The Nuovo Falcone is usually a ‘first kick’ bike, so I was shocked when it didn’t immediately fire up. I gave it a few more good kicks, but there were no signs of life. I checked the plug and points. Everything looked normal and clean. The fuel was on and the tank was full: the lights on the dash showed that electrical juice was flowing.

I stepped back and scratched my head. What was wrong? What was I overlooking? Normally, once the bike is warm it doesn’t need the choke or any throttle to burst into a nice steady idle. In desperation I opened the choke lever a fraction and tried again. The Nuovo Falcone immediately burst into life and continued to run smoothly after I closed the choke. I have no idea why it decided to hiccup like this and it never happened again. Put it down to Guzzi character. 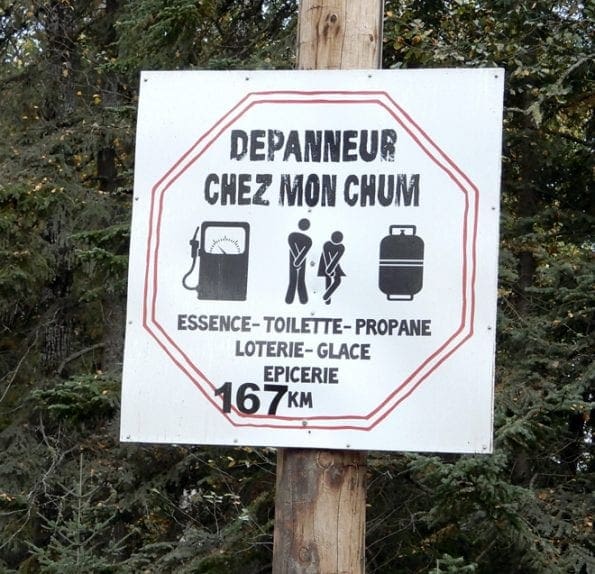 The crossing at Portage du Fort is across the tops of the dams and control structures of the Chenaux generating station which hold back the waters of the Ottawa River and have created the thickening of the river channel now known as Lac du Rocher Fendu. It had been raining hard during the previous weeks, the river was full, and water was ripping down the spillways in tumultuous rapids, but I couldn’t stop and the safety fencing precludes any decent photo opportunities. Never mind, beyond the Ottawa, I just plugged along quiet Quebec roads heading north.

There seems to be no discernible logic as to why one place tickles your fancy while another holds no interest. The little community of Parent, about 250 miles north of Montreal, had caught my attention ever since I’d spied it on a map. Parent struck me as an odd name for a village until I checked the Google oracle and found that it was named after Simon Napoléon Parent, a former Quebec Premier and Chairman of the Transcontinental Railway. 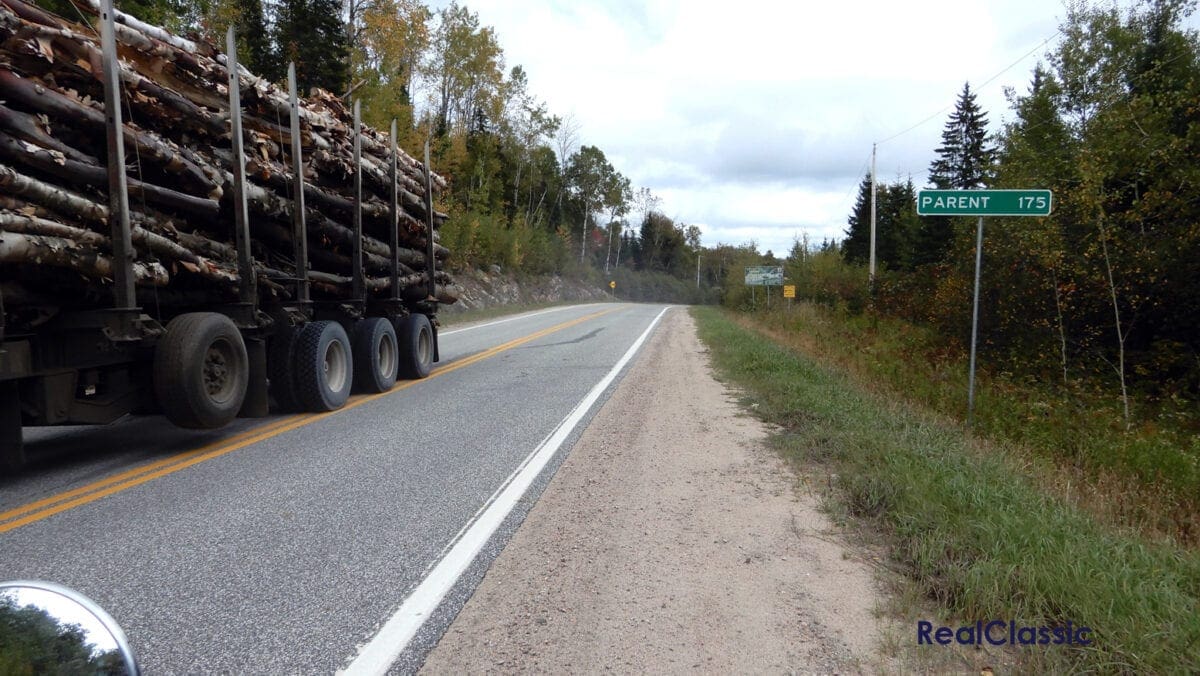 While the name was a curiosity, the real reason for my interest was the location of the village in the middle of the vast, largely uninhabited Mauricie Region of Quebec, and the network of unpaved roads that thread through the region. In my imagination, those were tiny little tracks – little more than scrapings through the forest topsoil to clear a path through the woods. The reality was a little different.

After a few hours of pleasant riding along empty roads following the valley of the Rivière du Lièvre I arrived at Mont Laurier where I filled my tank and plastic extra fuel can. North of Mont Laurier and up to Mont Saint Michel, the paved Quebec Route 309 closely follows the river, winding through a broad valley punctuated by pleasant houses and attractive farms. It was easy, smooth and pleasant riding, but I was looking forward to the promise of more than 100 miles of unpaved track beyond Mont Saint Michel. As I headed towards the gravel, an enormous double trailer logging truck roared by loaded with spruce and birch. It would not be the last logging truck I would see. 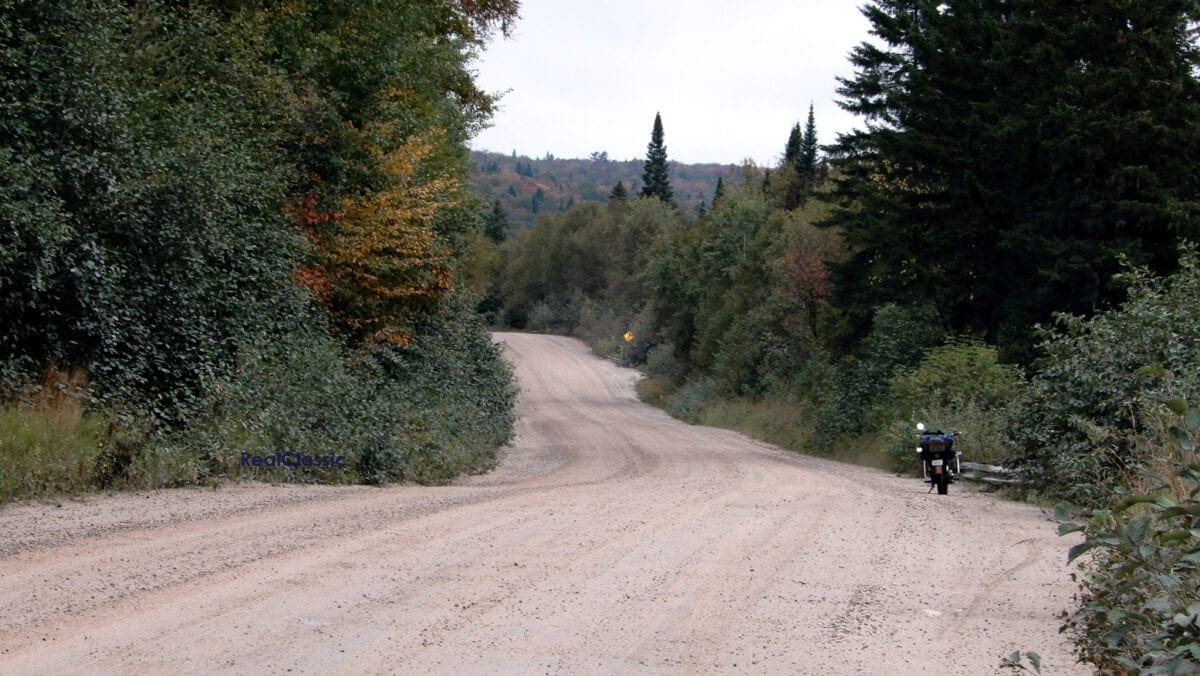 A few miles beyond Mont Saint Michel the pavement ended and the road became a broad grey scar through the forest. I was a bit surprised and a little disappointed that the first part of the road was so clearly a well maintained, scrupulously graded gravel highway and not the isolated track I had been expecting. Although the road was more sophisticated than I had imagined, riding still required a certain level of attention. There were soft spots, potholes, areas of loose gravel and some washboard, but nothing I wasn’t used to and nothing that unsettled the Nuovo Falcone’s equanimity. While the road hugged the edge of the river valley, the river took a more convoluted route, winding along the valley floor in a series of broad, serpentine bends. From time to time the road and river would meet but my attempts to take photographs were often thwarted by the shrubs and trees along the river bank.

Predictably, traffic was almost non-existent. Occasionally a heavily loaded logging truck would thunder by. Mercifully recent rains had dampened the gravel, so I didn’t have to endure the clouds of dust such speedy vehicles often create. Road conditions always dictate the speed of my progress, but I am always surprised at how quickly distances shrink, even on a bike as monumentally slow as the Nuovo Falcone. Because my mind is so engaged with avoiding pitfalls and making sure I don’t fall off, the miles roll by quickly. After about 30 miles the road crossed the river at a delightful rapids. I spent a few minutes taking pictures and shooting a short video clip.

Beyond the rapids the road continued following the river, often sandwiched between hills and cliffs along the valley edge. With the fading afternoon light, what little traffic there was disappeared entirely and for dozens of miles at a time I had the road entirely to myself.

Next time: a misty morning and a close shave…