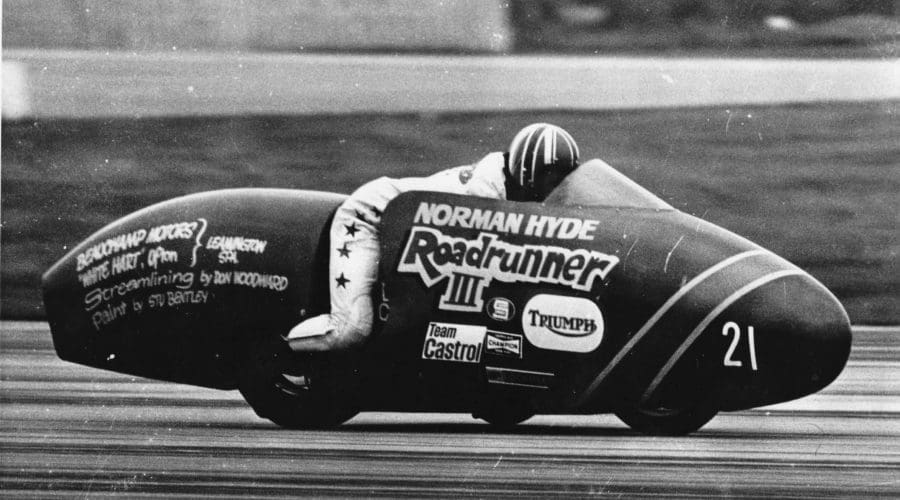 50 years ago in the September of 1972, one of the development engineers at Triumph’s Meriden factory accomplished something amazing. Norman Hyde wheeled his home-made Trident-engined outfit onto the runway at RAF Fairford – and went home with a world record. To celebrate the half-century anniversary of this event, the Triumph Owners’ MCC and Norman himself will meet on 24th September 2022 at the National Motorcycle Museum and re-live that record-breaking day.

In the months leading up to the record-breaking attempt, Hyde took apart a standard three-cylinder Trident engine and rebuilt it at 831cc to power an outfit, named Roadrunner III. Hyde added a supercharger and – fuelled on nitro-methanol – took it to 161.8mph, establishing a record that remained unbroken for 35 years!

Roadrunner III joined the National Motorcycle Museum’s collection in the 1980s and was one of the hundreds of machines that was severely damaged when fire tore through the museum in 2003. Fortunately the outfit’s bodywork, handmade in aluminium by Don Woodward, was in storage at the time and survived. The machine itself was painstakingly restored by Don’s brother, John, and Roadrunner III is now on permanent display in the Museum.

Hyde’s 50th anniversary coincides with Triumph’s 120th jubilee – cause for double the celebrations. So the TOMCC have organised a ride-in to the NMM exactly 50 years to the day after Hyde’s world speed record success. Hyde will judge a concours competition for bikes ridden to the museum, and give a talk about his awe-inspiring accomplishment on three wheels – followed by a Q&A session.

All TOMCC members will get half price admission into the museum, and the event runs between 10am and 3.30pm.