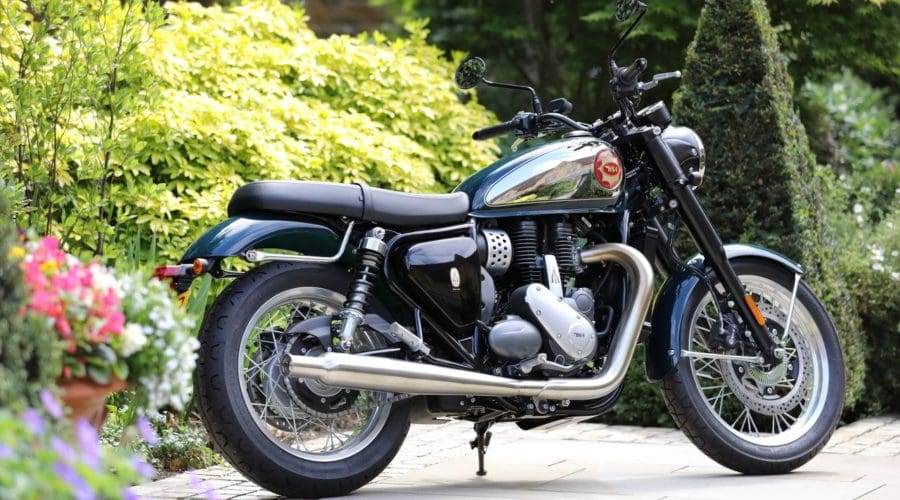 The new BSA Gold Star single was the star of the show at Brooklands this month, and more details about the brand-new heritage model are being announced almost every day.

The dohc liqud-cooled is being built by Classic Legends, a subsidiary of the Mahindra Group. Earlier this month they appointed an exclusive UK distributor, an offshoot of Motorcycles Direct / Lloyd Cooper Motorcycles / the Global Moto Group. They already retail new Kawasaki, Piaggio, Vespa, Aprilia, Benelli, Sym, Keeway and Mutt motorcycles and scooters.

Lloyd Cooper Motorcycles claims to be Europe’s oldest motorcycle dealership which has traded from its Watford premises since 1900, and was a BSA dealer from 1910 all the way to the end in the 1970s.

Now Classic Legends have advised that the Gold Star will be available to order soon, and they’ve confirmed that prices start at a very competitive £6500 – aiming squarely as Enfield’s 650 twins. That’s for the Highland Green livery. The red, black and ‘Dawn Silver’ bikes will cost £6800 apiece, while the ‘Silver Sheen Legacy’ edition will retail at £7000.

Most excitingly, the first deliveries of this 45bhp, five-speed bike are expected to arrive ‘mid to late August.’

Look out for the August edition of the magazine, where we have first-hand feedback and early riding impressions from RC regulars who were lucky enough to try the Gold Star for size at Brooklands…