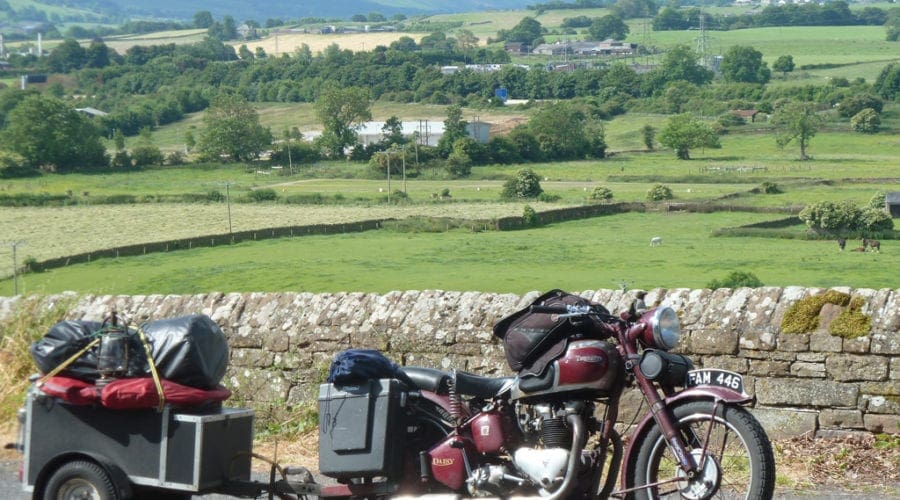 Long-time RC readers will be familiar with the adventures of Graham Ham, whose journeys aboard his 1948 Speed Twin were documented in his ‘Daisy’s Diary’ articles some years ago.

But there was much more to Graham’s original and subsequent adventure than simply taking part in the Landmark Challenge on a sprung-hub old clunker, collecting Landmarks, WATOC points and not inconsiderable liver damage due to imbibing serious quantities of Olde Sporran (whatever that may be).

So he wrote a book – and then another book – on the subject. And although the hardbacks have been out of print for quite a while, you can read and enjoy the ebook editions. The first of them is Daisy’s Dairies: Challenging Life on a 1948 Triumph.

Graham’s long-suffering offspring spent superhuman amounts of time on the pillion perch, and the 1948 Triumph 500 only blew up once or twice a year, which isn’t bad when you consider that Graham’s throttle seems to function only as an on/off switch…

Some of this was covered in the original articles, but the full-length booh contains the depth and breadth of background which gives real-life meaning to Graham’s ongoing journey. The clue is in the title, the subheading. We’re not going to give away the whole plot here, but we did ask Graham what he was getting at.

‘Well, one of the main themes to the story is the fact that I had reached a watershed in my life, which led to me making a fundamental and, now I look back on it, pretty scary change. At the time this story starts, from the outside, I had it all. Money, success, huge office, expense account and tasty wheels. Why did I literally give it all up and walk away from it? Well, that’s hopefully part of the whole story, none of which was really ever aired in the previously published diaries.

‘I was, literally, “Challenging Life” in my own way. I took the chance to get to know and, at least partially, understand my kids – something I had sorely neglected due to the pressures of the business. And when the sun shone, and all was well, it was marvellous. Researching the landmarks and then visiting all those places, finding out about the history, etc… great fun. And of course, some of the characters we met, the generosity and hospitality that was shown to us at various places and the sheer eccentricity of many – these are priceless memories. Listening to the kids exchange highlights and experiences after each foray, and realising that I was doing something special, right there.

‘Real wild camping in Cumbria was just the bestest experience in the world, ever.’

So there’s a lot more original material in the book, then? It’s not simply a collection of pre-published features?

‘New material? Oh yes indeedy. Loads and loads. Writing for the mags was very difficult, because I had to decide what to leave out in order to fit the general story into a very tight space. The result was that a lot more got left out than got included! I wasn’t ever really happy with the mag pieces because of that, and a lot of what I consider to be very intrinsic to the whole story were sacrificed.

‘For example – Daisy’s clutch fell off in Wales, leading to a delightful encounter with an Olde Worlde shop-keeper, and this never made it at all into the mag pieces. In writing the book, I have been able to include much, much more of what really happened, how it happened etc… and have been able to be far more descriptive.’

So the book is a wee bit longer, we can assume?

‘I think the original series in the TOMCC’s Nacelle and on the RC website was in four parts, and consisted of about 15 A4 pages in total. The book is the equivalent of some 190-odd A4 pages, making it a 200-pager published. From memory, it was roughly 130,000 words. There are eight pages of piccies as well, two to a page.’

And don’t tell us you trotted that little lot out in a long weekend – the work of mere moments?

‘It took fourteen months to write the book version, which seems impossibly long but there y’ go. There were times when I thought it would never ever be finished, especially on the days when the writing didn’t flow. I would write whole sections, a fortnight’s efforts – 20 pages or so, and then rip the whole lot up in disgust when I read it! This happened on numerous occasions and I have to admit that I very nearly gave up at one point.’

So now it’s done and dusted, how do you feel about it? Good?

‘Does it feel good ? Well, absolutely it does. And I had enormous fun remembering all the little details, all those little moments that should make it a story worth telling.’

The story, of course, isn’t just about Graham. Without giving away too much, it’s also about his children and his relationship with them as they mature during the course of the Diaries. This inevitably touches on personal stuff, particularly on Graham’s relationship with Chris, his teenage son. While reading it I did raise an occasional eyebrow – Graham can be painfully forthright about some of their exchanges during the more stressful moments, and I wondered how Chris and Chloe felt about this.

‘I saw no point in being dishonest about these things,’ explains Graham. ‘Chris was emerging from a “difficult period” — that 13 year old hormone thing, and I decided to write the story as it really had occurred. It’s notable that he improved in leaps and bounds as the story unfolds. Before writing, I had discussed with Chris the fact that the book was to be a “real” account, and he remembers well his old problems and seemed philosophical about my warts an’ all depiction. I think he actually uses it as a yardstick by which he measures his own maturity. I still wonder now whether I should have left out those particular incidents, but on balance I keep deciding that it’s fine the way it is!’

So you get the highs and lows of Graham’s 5000-mile adventure, including the very worst of times – ‘Daisy’s first engine melting on the very first foray, and then discovering that just about everything in it was knackered. The Scottish weather which, when put together with Daisy’s recalcitrant behaviour, seemed desperate’ – along with the very best of times, when the roads were open and the skies were blue and the Triumph’s engine didn’t miss a beat.

All this, plus mechanical mayhem, fire in the shires, sheep, rabbits and more, neatly packaged in an ebook which can be read a wide range of devices. And if you enjoy the first one, then there’s a sequel which picks up the story later on…