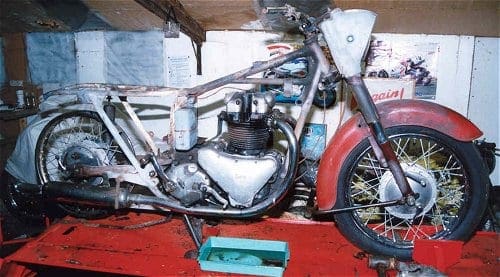 The End of the End. Looking back: what it cost, what went wrong, and sundry Awful Truths. Frank Westworth considers whether it was worth it…

This is it. This really is The End. All twelve-part series should have at least thirteen parts, don’t you agree? And this is the last. I think I’d have to commit either ritual murder or ritual suicide if I wrote any more about this once-singed motorcycle.

I cast my mind back to the mid-1990s when I first acquired the shattered remnants of a once-fine Ariel Huntmaster. Sam the previous owner delivered it by trailer on a damp Sunday morning, and went away, cackling only slightly, clutching a chunk of money. How much? How much had I paid for a completely destroyed old motorcycle? Five hundred pounds, m’lud. I must have been crackers. But it had seemed like a good idea at the time.

Why do we rebuild wrecks? No no; that’s not a rhetorical question; it’s an obvious honest question with no easy answers. Riding old bikes is a good thing; it is, it must be, or we wouldn’t do it. But rebuilding a pile of scrap? Why do that? It gets complicated when you try to answer honestly, doesn’t it?

My previous complete rebuild had been very disappointing, not least because the bike in question, a BSA B25SS, belonged to Rowena my plainly Better Third, and had been intended as an introduction to the grimy but entertaining world of classic biking. I’d acquired a dismantled BSA 250 for her to cut her classic teeth on, because, being An Expert, I knew that all parts for late-model BSA singles were easily available, that working on them was easy and easily something we could share, and that they are in fact fun to ride. And almost worthless. That last was important; I wanted her to be happy and carefree with her first classic. If she fell over, or rode it into a ditch or couldn’t handle the awesome power (after all, she was used to a feeble BMW R1100R) then it wouldn’t matter, so long as she didn’t hurt herself, of course!

But the rebuild of the BSA was terrible. Parts supply is excellent, but the quality of many of the parts I bought was atrocious. Things were not helped by the fact that BSA had an entertaining approach to their choice of threadforms, which often meant that parts which should have fit did not, and Shed sessions, usually times of joy for me, became really quite depressing. But we got it built, and we got it running, and we shared in the pride of BSA ownership thing, and… the entirely rebuilt and glorious bike had no first gear in its gearbox (which was all new) and didn’t charge (all the electrics were new) and… it went back into the darkest recesses of the Shed, where it remains. Rusting.

I needed cheering up. Herself was happy with the classics she rode (a Triumph Hurricane and a BSA A65) but I wanted something which was a challenge with a definite reward at the end of it. And I’ve always admired Ariels, but had somehow never rebuilt one. Hence this five hundred quid project. How badly damaged could a bike be by a simple fire? After all, it hadn’t been ablaze for long, and all the tinware was there, and electrics are easy and cheap to replace and the engine had been rebuilt. And of course, a decent Huntmaster, with original tin and matching numbers – including its original registration – was worth an honest £2500. This gave me a couple of thousand theoretical pounds of leeway, and a couple of thousand pounds buys you lots of bits.

My time is free, of course…

So I was happy with the wreckage, shoved it into a corner of The Shed, soaked it with Superslax, and ignored it for a year or two. First mistake.

Things, even excellent Ariels, do not improve with age, particularly if that extra age is spent stood in a shed. Unless your shed is climate-controlled, of course, in which case you probably don’t worry about pecuniary things much!

Readers with very long memories may recall that when I eventually started the strip and rebuild process, I amassed a pile of useless parts. I listed some of them in the early part of the series, but I stumbled around the vexed subject of what the replacement parts and the associated expert services actually cost: how deep was the dent in my wallet!

The burned frame was bent, and the back wheel was welded into the swinging arm. I was lucky, a very nice man sold me a frame, a swinging arm and a rear wheel for £150. Another very nice man took them away and had them blasted and stoved, for no charge at all, because I was then A Famous Journalist (ha!) and I repaid this kindness with publicity: stand up Graham Horne and Redditch Shotblasters. Had I been human, the cost would have been around £350, plus Graham’s time, which is of course incalculably expensive, but should have cost at least that again. That two grand leeway is looking a bit stressed already…

A rebuilt (aka new, built from parts, because the old one was actually scrap) magneto? £220. A bargain.

A rebuilt dynamo (ditto)? £150. Once again, I was able to off-set some of these costs because being A Famous Journalist does that for you!

How are we doing? Oops, we’ve already spent a thousand pounds, half our notional fettling fund.

And then… I bought a replacement petrol tank for £75 (but sold it again when I discovered it was the wrong one), and a lot of oil tanks, while I learned more about postwar Ariel oil tanks than any sane individual would ever want to know. I’ve still got five of them, at an average cost of £20 each. And a good condition replacement petrol tank of the correct type, from the ever-resourceful John Budgen: £130. Bargain.

Two tyres at £100 the pair. A new chain at £30. Masses and masses of stuff from Draganfly, including loads of fasteners and fittings, all of which fit. I wish Drags supplied parts for 1970s BSA 250s. Not least because when you ask them a question you get a reply, and when there’s more than one way to do a job, they’ll always offer helpful hints. No, not ‘buy a Honda…’

Meanwhile, when I discovered that what had appeared to be a sound set of mudguards were in fact mighty tributes to the art of Bob The Demon Bodger, and contained more glassfibre than steel, I ventured forth and bought a set of new repro mudguards for £130 each. Then, with the wisdom of the only slightly ancient, I repaired the old ones…

A shiny new black seat set me back around a hundred pounds, and became only slightly ripped when we moved house. And I’ve saved the exhausts and silencers, largely because they look so odd with their burned-black chrome.

A wiring harness was another thirty-odd quid, and a CMES regulator a similar amount, although the Famous Journalist bit helped a lot here (thanks, Sean).

An Ariel Clubman sent me the bit of the FERC* which fits over the gearbox sprocket (I have of course forgotten his name; my brain was so addled by the appalling discoveries which plagued the start of the resto that I could probably claim industrial injury compensation … but I doubt I could afford to pay myself), and a rear hub! The intelligent thing to do here was build a rim onto that hub, and of course I did (£112) but only after buying a £65 BSA rear wheel (because they’re the same – ho ho – and am I not An Expert?) and rebuilding all of its internals (thanks, Drags). And £35 for a new (incorrect, thanks for telling me, Ben) fuel tap, and a battery, and cables, and control levers, and a twistgrip, and all the rubbers, and springs, and a headlight, and a speedo rebuild, and an auto-advance unit, and a real tin FERC (thanks Delboy; thanks John) and a fibreglass rear guard when I was feeling less brave, and a genuine tin rear guard off eBay for £50 or so…

Tell you what, let’s look at it in two different ways. First, how much of the original 1959 Ariel FH remains?

The engine, but not the carb or electrical gubbins. The primary side but not the chain or clutch plates. The inner part of the battery carrier. The front forks and wheel. The stands, the headlamp bowl and nacelle, and the tanktop shiny strip. Erm… The handlebars and the handlebar clamp. The gearbox, although the entire selector mechanism needs replacing (I bought a complete gearbox at a jumble for £40). The toolbox and air filter, although both need assistance (I bought a tool box for £35). Engine plates and most of the fasteners.

While rebuilding the wreck I stumbled across several other Huntmasters, in various conditions, and in fact bought one of them because I thought that unless my guardian angel came up with some moral fibre and strength of character I was going to throw the whole caboodle away in a bout of rage and despair. That 1954 FH with an MoT and running very well came to Cornwall for £1500. And so, what I should have done in the first place was buy a runner.

Back when I was Editor of a pan-galactic old bike magazine and was regularly asked advice by folk who were contemplating the purchase of some nail or other, I would always suggest one of three things. First, pay a load of money for a bike with a warranty and demand that the warranty was honoured if the thing failed. Second, buy a bike in good condition but crashed. It’s a fair bet that it was running when it hit Mr I’msorrymateIdidn’tseeyou, and forks and front wheels are available and affordable.

Third, I would insist; never ever even consider buying a bike you’ve never seen, from someone you don’t know and which you’ve not heard running, unless a) it’s free, or b) you only want it for bits. This is really good advice, and only a complete chimp would fail to follow it. Pass me the banana…

Total cost? Just over the £2500 the bike is possibly worth.

Mistakes? I was offered a 1959 NH 350 single Ariel in sound original (and indeed running) order for £750. I should have bought it for spares for the FH.

I look at the bikes pulled from the wreckage of the National Motorcycle Museum and I shudder. Never again.

On the other hand, the Toastmaster Project did a whole lot to keep me sane through what was a very dark year, and writing the story up has introduced me to loads of great folk I would otherwise never have met, and I am now the world’s Number Two authority on 1959 Ariel Huntmasters, and… I really do like bananas!