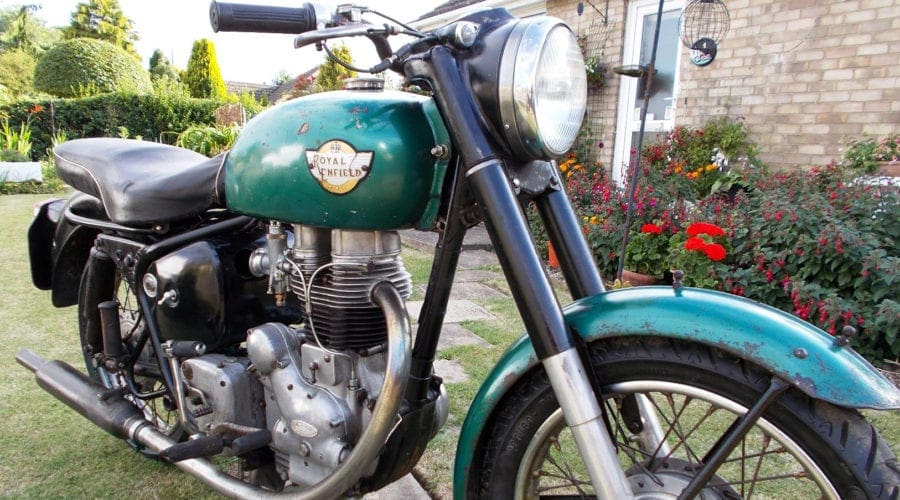 Imagine finding a classic British motorcycle, stored for nearly half a century, just like the one your dad rode. That’s how this Clipper found itself a new owner, and Roy Workman tells its tale…

This bike was first seen at a Newark autojumble by a friend of Joss, who thought that it was a Bullet. However Joss spotted that it was a Clipper and sometime later on he bought it. His father, pictured here with Joss, had owned a similar Enfield from 1958, a 350 single, until 1972. Joss had heard about this Royal Enfield Clipper hidden away in a barn, and that it had last been taxed in 1972, so he felt he had to have it. The bike had sat in a damp barn for 46 years when it was pulled out and taken to Newark.

Joss has run the motorcycle section of the Swaton Vintage Day for many years, and this year the bike was on display at this meeting. It doesn’t look a lot different now to how it did when he first saw it. This is the first Royal Enfield he has owned.

Joss didn’t fancy riding around on old tyres and tubes, so these have been replaced. The brake shoes were relined and a new chain fitted. A new carburettor has also been fitted, as has a wiring loom. Hitchcocks Motorcycles supplied a folding kick start, as Joss did not like the fixed-style one originally fitted. The Enfield Club confirmed that the matching engine and frame numbers are correct. Spare parts have been easy to source and Hitchcocks are very helpful. The pushrod for the clutch had seized so Joss bought a new one, but this was a bit of a tight fit. He solved this problem by using a small round wire brush in an electric drill, gently working away until the rod worked perfectly – job done!

The gearchange on British bikes of this era is on the right side; the other way around to the bikes with which Joss is familiar. On one occasion he got it wrong, locked up the engine and bent a valve, so the head came off and the valve was replaced and the Clipper was ready to go again. Despite that mishap, Joss is pleasantly surprised at how easy the engine is to work on.

The machine is running well now and Joss reckons it’s faster than his BSA 350 military spec B40, which is lower geared. The Enfield’s engine still smokes a bit; hopefully this may clear up but if not a new piston will be fitted.

The paintwork is ‘as found’ and the paint on the petrol tank has been worn away revealing the shiny metal. Joss feels that the previous owner may have regularly ridden with a bag resting on the tank. He is impressed with the quality of the fittings and the aluminium on the machine, which should polish up nicely.

Joss loves barn-find bikes and he has another that is waiting for a little work and TLC. Meanwhile, this one was the star of the Swaton Show! This event gets better every year and it is well worth a visit.

Words and photos by Roy Workman, with thanks to Joss Bourne