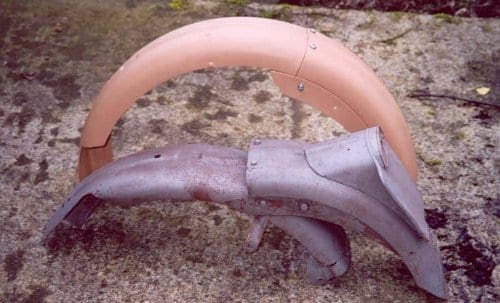 If you’re going to rebuild a burned-out Ariel Huntmaster, then you’re going to need spare parts. Lots of them. We present Frank Westworth’s guide to autojumbling for idiots…

What do you do when faced with the realisation that you’ve started a project which is not what you expected? Do you shovel the whole lot into a deep pit and pretend it never happened? Do you hang it all loosely together and foist it off on some other unsuspecting idiot? Both of those options are intelligent, and of course I did neither.

What I did consider was this: maybe I should buy another Huntmaster (yes, I know; but I actually wanted a Huntmaster to ride, really…) and use the toasted version as a source of spares. Or, option 2, should I bite a bullet, pile the sad remains into a suitable van and trek it over to a more talented restorer?

Option 1 was a great idea, defeated only by the fact that as a source of spares the Toastmaster was a complete waste of space. All the spares which I might need for another FH were … ah … not there.

Option 2 was a less sensible idea, given that I wanted to carry out a restoration myself, not pay someone else to have all that priceless fun, and … well, handing a potentially useful powertrain to any commercial restorer and asking him to build a motorcycle around it was exactly like handing him a blank cheque. And although my cheques are indeed blank, that is because if they’re not blank, then they’re bouncing! And I didn’t want to admit defeat. I did not want to admit that buying this particular project was one of the most stupid things among a lifetime of stupid things wot I have done…

This is the time to stand back and survey what your unwisely spent money has actually bought you. So I did.

For £500 I had most of an engine (no ancillaries), a gearbox and the primary drive. I had a front wheel, headlamp shroud, toolbox (badly repaired), an air filter box (empty), some handsome, if charred, exhausts, centre and side stands and a pair of mudguards which had been repaired before and could presumably be repaired again.

I’d bought another frame, a swinging arm and a set of forks from John the Editor of the Ariel OC magazine, so in a wild rush of optimism I lugged these over to Redditch Shotblasters and instructed them to make them as new. Alarmingly, they did… An even better surprise was that when I toddled over to Redditch in my little brother’s van (cost the same as the Toastmaster; much better value), I discovered that the inestimable Graham Horne had fitted the swinging arm and forks to the frame for me! Told you he was a good bloke.

Things were plainly looking up, and as I sat on my stool in The Big Shed I understood that this scabrous Ariel and I were meant for each other.

So I plonked the rotting remnants of the bike onto the bench and stripped off the remaining useful bits, including the centrestand (only slightly bent in the fire), which I painted with a handsome coat of Smoothrite (no powder coating here; my logic is that no-one is going to look at my centrestand and mock!) and fitted it to my freshly shiny frame.

Which is when I started ordering lots of stuff from Draganfly. I always tell folk that when you’re ordering parts from a parts supplier, you should always plan carefully and order as much as possible in one go. That way you make the most efficient and sensible use of the supplier’s time and the postal service. I did not do this. The nice Chaps At Drags must wince when they see incoming email from my address. They’ve had loads of them. Ordering vast orders like a pair of centrestand pivot pins, new circlips and springs. Oh (a day later) and new washers. Because the fire had somehow heat-treated the centrestand springs to the point that I could stretch them to 200% of their original length by hand, which is not much use. And the pivot pins had welded themselves to the circlips and washers, which had therefore been destroyed when I hammered them off the original frame. Nothing is easy. Thank you Chaps At Drags for your patience…

But with the centrestand fitted (not too appalling a job if you can lie the frame on its side to do it), and the front wheel (with a fresh new tyre) slotted into the forks, I could at least stand The Project on the bench, gaze upon its shininess, feel encouraged, and plan the next move.

The next move was a long round of visits to every autojumble I could find, interspersed with begging mails to the Club’s e-list when I couldn’t figure out what went where and why, and a similar number of intelligence-gathering mails to … those nice Chaps At Drags. Who always answered (thank you, Roger) and were always right. Baffling things like: the footrests are different; which goes where?

As you can see, things were fair grooving along by now, and it was time to think ahead, to think of tasks like getting fuel into the engine and sparks to burn it and electrics in general. It’s great to distract the mind from worrying things like How Much Is Everything Going To Cost? And Why On Earth Am I Doing This? Even silly things like How Do The Centrestand Springs Fit (which caused some hilarity on the e-list, if memory serves)? And a great way to do the distraction thing is to get out there and hunt for parts and services.

The carb was easy. Call Surrey Cycles, tell them which bike it was, agree that yes, I would prefer an as-original Monobloc to a Concentric, and send them a cheque.

The electrical side of things was comic. I removed the magneto and dynamo from the engine (the fibre drive wheel on the mag’s ATD was burned away, despite living inside the engine…), gazed at them in wonder, called Sean Hawker at CMES and wondered whether he fancied a bit of a challenge and helping out an old mate? He did.

I rattled over to the palatial CMES and placed the mag and dynamo into the careful hands of Mr Sean. After only three cups of coffee and maybe half an hour, his mirth was back under control. He thanked me for coming along to cheer him up. I enquired whether he’d be able to rebuild these slightly melted, charred and crumbling examples of Mr Joe Lucas’ most magnificent electrical gubbins. He collapsed laughing again. Unable to face more wit and coffee, I crept away…

The jumbling was equally entertaining. At some jumbles there would be no recognisable Ariel spares at all. At others, there’d be a few. I found a brace of oil tanks at Shepton Mallet, starting the development of the profound knowledge of swinging arm Ariel oil tanks which I wish I did not have. If anyone has a very late, 57-on FH oil tank complete with its filter assembly, then I’d like to do a deal! The same stall had a complete toolbox. Sadly, I chose to buy two oil tanks, neither of which was the right one.

At the very fine JBM Cheltenham jumble I found another oil tank (and despite it bearing the legend ‘VH500’ in handsome 70s gothic hand-painting, I bought it), along with a late petrol tank, which, despite being an improbable shade of yellow, felt and looked fine. I showed the fuel tank to John Budgen and Graham Horne; Ariel experts both, and both pointed out that it was for a VH and was therefore very rare and desirable, if not exactly correct for an FH.

They suggested that if I wanted, I could probably trade it for the correct one at a later date. I was ecstatic, handed over the money and went on my way, beaming like a simpleton.

Square Four-riding Delboy had read of my predicament on the e-list, and approached me at a Ross-on-Wye jumble clutching a set of glassfibre rear chain enclosures. This was wonderful! He was so surprised by my enthusiasm for dodgy bits of plastic that he offered me more, so I also acquired (‘bought’ is too stern a word) an entire glassfibre rear mudguard, complete with rusty bits around the impressions of the rivets. This sort of detail is important, you know.

Things were looking up. My confidence was rising. Who said that Ariel spares were hard to find? It was probably me…

Meanwhile, back in The Shed, I’d been beavering away with the various big lumps of the powertrain. But more of that next time…