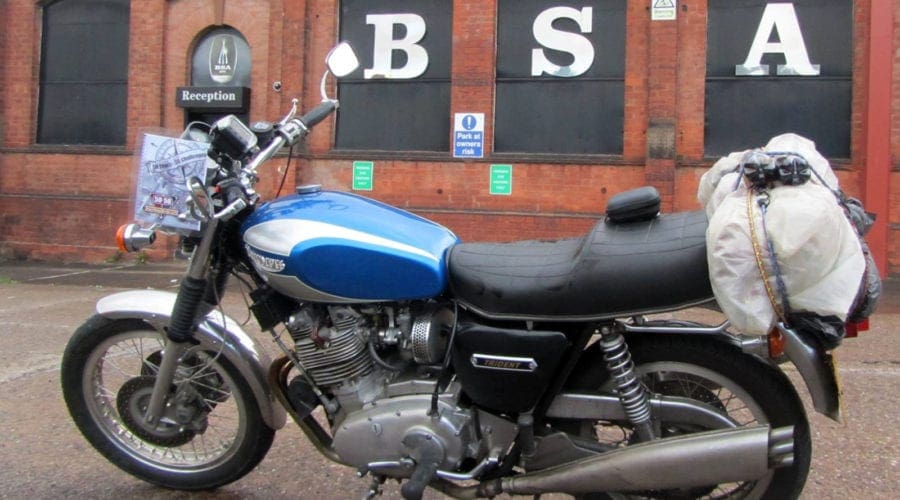 On 26th January, the year-long 50-50 Challenge results will be announced by organiser John Young. To celebrate 50 years of the BSA Rocket 3 and Triumph Trident in 2018, John organised this worldwide event to ‘get triples out of garages and on the road’… and raise a shedload of cash for charity.

Participants based anywhere in the world competed to complete tasks in the 50-50 handbook, ranging from short rides, photo-evidence of visits to sites of triple history such as Umberslade Hall or Meriden, through to door-stepping triples celebrities like David Aldana or Alex George for autographs.

Some serious long-distance challenges happened too, with 10 new members to the Iron Butt Association UK following a 1000 miles-in-24-hours trip to Scotland and back, led by John, one of the world’s most accomplished long-distance riders. Yoram Broniki  flew from the USA, got on a bike, rode the 1000 miles and flew directly back!

Of the 50 challenges, only two weren’t completed; the two racetracks in South Africa most closely associated with the triples. During 2018 the leaderboard for top points changed hands several times, with a Brit, a German and an American vying for the number one position.

The photos hereabouts show various 50-50 Challengers completing different tasks; Richard and Nic on their way to Meriden and Small Heath, Col McAndrew’s Trident clocking up some miles on his 50/50 adventures, and Tim Riley’s Rocket 3.

The Challenge’s nominated charity is the Donna Louise Trust, for children’s hospice care, which has received £17,000. This was raised from entry fees, donations at John’s triple-talks, and visitors to John’s triple collection. At the latter there were points up for grabs for riding an NVT Easy Rider, one of John’s more bizarre passions!

Participants declared that this initiative has helped to put triples back on the map, and put many more miles on their odometers than they’d ride in a normal year. Coupled with the cash boost for the Donna Louise Trust, that makes it a 50-50 win!