Velocette’s overhead cam K-series singles are legendary. On the road, the KTS and KSS models covered the touring and supersports bases. For clubman competitors, the KTT racers gave their Norton counterparts a run for their money. And of course all of them owed much to the works factory machines, which were mainly 350s. But some 500 KTT racers took to the track in the late 1930s – Stanley Woods campaigned one at the Isle of Man to second place in the Senior TT in 1938. And now one of these 500s is coming up for auction… The 500 racers were a blend of ohc KTT and ohv MSS machines. The frame and cycle parts were taken from the KTT with its ground-breaking swinging arm rear suspension. The taller 500 engine was a tight squeeze in a frame intended for a 350; it needed a cutaway in the underside of the fuel tank to give clearance for the cambox. Space for the carb was made by lopping off the rear tank-mounting bracket, which was bolted to the frame instead. Indeed, there was so little room for manoeuvre that it was impossible to fit the engine as a single item into the frame; the top end had to be attached after the motor was manhandled into place. 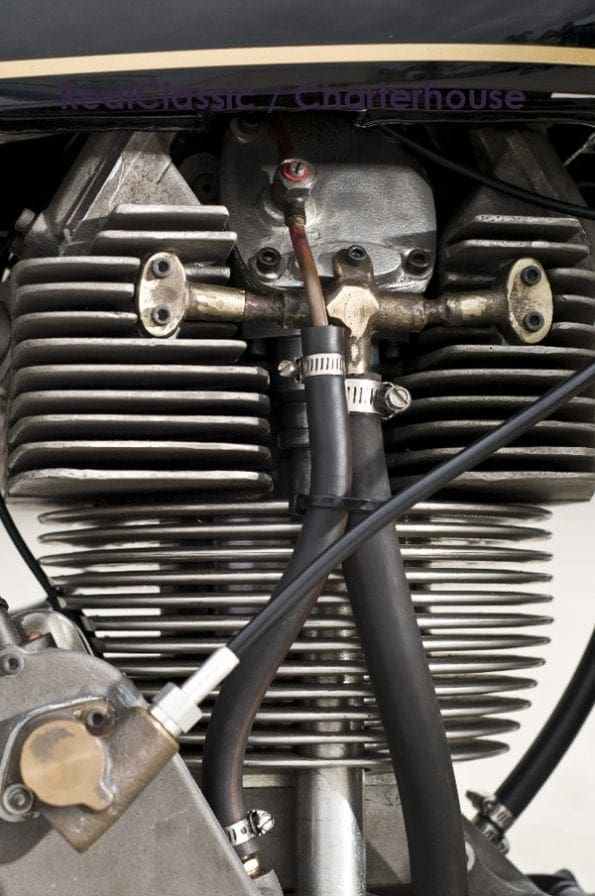 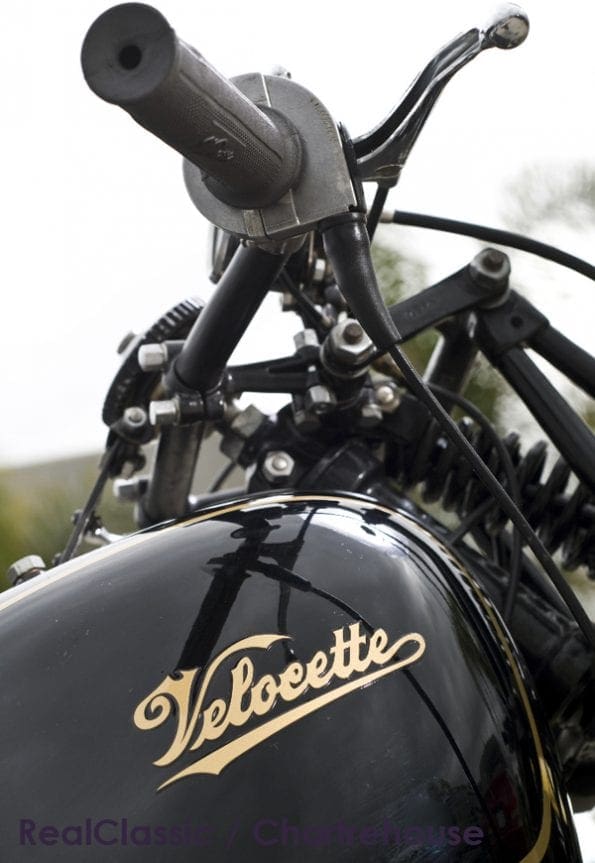 The engine itself shared dimensions of 81mm by 96mm with the ohv MSS roadster, pair with the K-series overhead cam top end. The 500’s conrod was machined from a KE805 forging, and carried its own oil feed to the small end. Additional oil feeds sprouted from the timing cover into a jet which helped lubricate the bore. A slipper-type lightened piston typically ran at 8.5:1 compression, raised to 10:1 when running on dope by removing a shim from the base of the barrel. 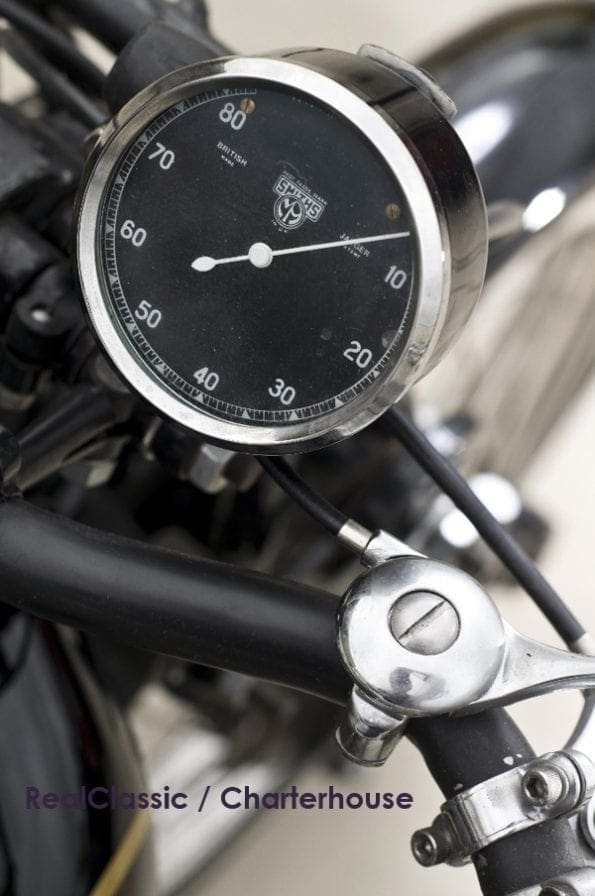 Depending on the fuel and set up, the 500 racer output between 39 and 43bhp at 6500rpm. 6700rpm was the absolute redline limit – riders went past that point at their peril. This translated to top speed of around 125mph. By comparison, a 350 KTT running dope could just about break the ton…

The bike you see here is being auctioned on 10th May 2017 by Charterhouse. It’s described as ‘a 1937 Velocette works 500 which was in a garage fire when in Australia 80 years ago. Thankfully it was more recently rebuilt by Bob Jolly from Australia along with Rod Coleman from New Zealand, both well-known and respected Velocette racers and restorers, using a few rescued parts with the rest of the bike being completed with new machined parts.’

The current owner bought the bike in Australia and brought it back to the UK. It’s road registered and comes with a V5C. Charterhouse Auctioneers expect it to sell for around £40,000.

So here’s where we start sleuthing. Close examination of the engine image reveals that the bike being auctioned does indeed display the correct number of chunky big fins on its cylinder head – 11, rather than 10 – for the 500. The factory bikes also used the whopping great big alloy torque arm on the front brake, which is bolted (not brazed) to the fork blade. The frame also looks correct: single downtube, full cradle, upright seat support. 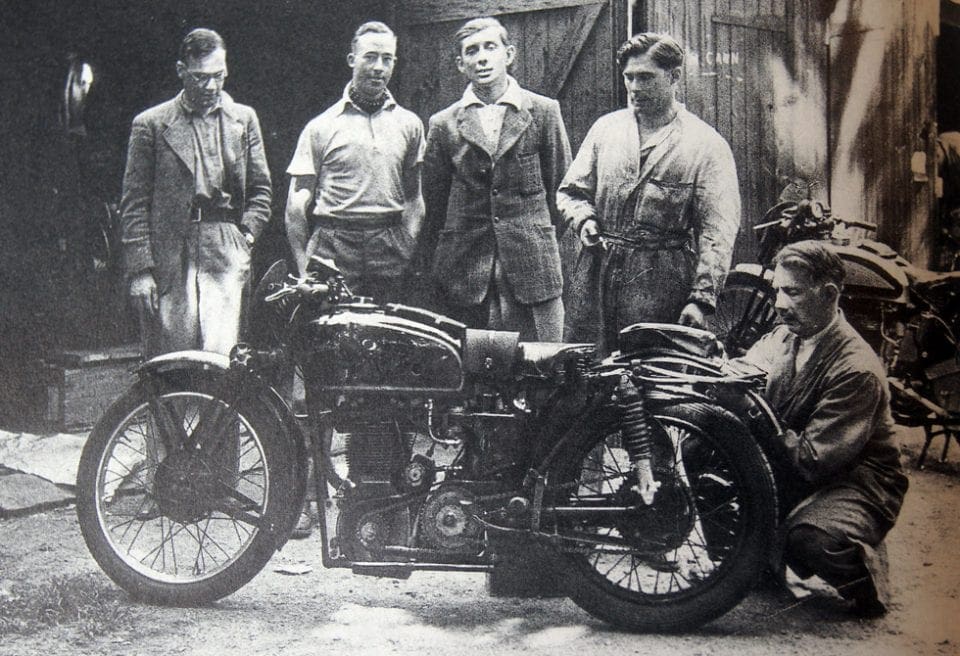 A Velocette 500 racer in 1939, before it was shipped to New Zealand, from Ivan Rhodes’ book

Further research reveals an intriguing image in Ivan Rhodes’ acknowledged bible for the marque, published back in 1990. The photo came from Les Archer’s archive and shows a 500 with this caption: ‘the pride and joy in the Archer camp in 1939 was this “dog kennel” 500 springer, which Stanley Woods had used in 1936. Here it is at the back of the Falcon Cliffe Hotel being fettled by Les’ father.’

‘Back in 1939’, says Ivan Rhodes, ‘the Archers had adopted the policy of supplying and preparing race machines for selected customers, and showing them the ropes. Harry Caldwell and Jim Garnett were two such fortunate riders of Mk VII KTT models. They justified their selection by finishing 30th and 31st.

‘The works 500 was eventually sold, post-war, to Rod Coleman. He took it to New Zealand where it remains to this day in a sorry and dismantled state, the engine having been virtually destroyed in a fire.’

So it seems reasonable that the Velocette which Rod Coleman took to New Zealand and which caught fire many years ago, was rebuilt after 1990 and subsequently returned to its homeland. The prospective purchaser should definitely check the paperwork and all the relevant dates – and if you end up buying it then do get in touch, because we’d love to know the full story…

Charterhouse are accepting further entries for their sale on 10th May 2017.