Was Yamaha’s ground-breaking FZR as good as its reputation suggests? A new collection of old roadtests helps to place it in perspective…

This collection of 28 magazine articles spans eight years and the several incarnations of Yamaha’s FZR1000, from the original 1987 Genesis through to the final fox-eye EXUP, with a detour here and there to take in the FZR600, the FZR750R OW01 and the odd special – like a 1000cc engine crammed into an OW01 chassis.

You’ll also find plenty of information about the FZR’s road rivals of the time because over a third of the articles are comparison tests, setting the Yam against the CBR, GSX-R, ZX-10 and ZZR models of the time. There’s even a guest appearance from the ZXR750 and Triumph’s 1991 Daytona.

Why all the fuss about the FZR? Well, it was easy to forget how good Yamaha’s litre class sportsbike was in the late 1990s, when the firm’s reputation was dented by the somewhat blobby Thunderace. It wasn’t until the R1 arrived that Yamaha riders could feel fashionable again. But when the first FZR1000 Genesis appeared in the autumn of 1986 it set everyone agog with its Deltabox chassis which was described at the time as being ‘possibly the neatest, least fussy and most elegant frame ever fitted to a motorcycle.’

Then from 1989 the FZR came equipped with its signature servo’d exhaust valve, the Exhaust Ultimate Power system of lore (think of it as YPVS for four-strokes), which contributed towards that model’s ability to travel from a standstill to 60mph in under three seconds. The EXUP FZR was capable of travelling at 170mph and won all manner of plaudits, including Cycle World’s ‘Bike of the Decade’ title. 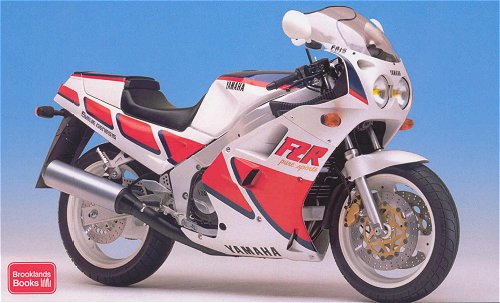 The FZR went through a phase with just one oblong headlamp in the early 1990s, when it also gained upside-down forks and four-piston brake calipers, then in the final year of production it went back to having two headlights. Throughout its life the model received all the usual development work and upgrades. The water-cooled, 20-valve four-cylinder motor started life as a 989cc version of the FZ750 lump. The engine’s cylinder block was tilted forward to cram it into the compact chassis and keep the bike’s centre of gravity as low as possible.

In its original form, the engine developed 130bhp at 10,000rpm, giving a top speed of over 155mph. For 1989 the engine displacement was increased to 1002cc and EXUP arrived together with larger valves, revised cam timing and bigger carbs. These mods boosted power to 145bhp and were augmented by the arrival of the Deltabox 2 frame which used the engine as a stressed member.

If you’ve seen any of the Brooklands’ Books Portfolios then you’ll be familiar with the format of this edition. It’s a 140-page softback with around 300 illustrations.

Although all of the magazine articles would have originally appeared in full colour, they are reproduced here in black and white which can make some of the text a little tricky to read – overlays which work reasonably well in high-resolution colour can be a little fuzzy in second-generation mono. The features are all taken from mainstream magazines of the time, including Performance Bikes, Superbike, Cycle World, Bike, Fast Bikes and Motorcycle International.

There’s plenty of good reading here, but if you are hoping to refurbish an FZR1000 and were looking for hands-on advice about maintenance and tuning then you’ll be disappointed.

These are all road tests, some of them just quick spins, and plenty of pages in this book are devoted to models other than the core subject. So you won’t get great advice about whether you can fit later brakes to earlier models, or how to cure a sticking EXUP system or the like.

You do get an awful lot of comparative performance data, though, plus at least one super survey of readers’ bikes and their experiences which is useful if you want hints and tips about fork oil grade, brake pads, preferred pipes, that sort of thing. The only problem is that much of this advice is now over 15 years old so you may not be able to buy that particular Vance and Hines CDi unit any more…

So I have a suspicion that this Road Test Portfolio will be more attractive to people who used to own an FZR back in the 1990s than it will be useful to people who do own an FZR these days. The biggest problem of the FZR, when compared to its rivals at the time, was that its ample power wasn’t particularly easy to access on public roads. It was a faster bike on the track than many, but it could often be slower than its rivals in real life. So now you can read the book, compare the road tests, and make up your own mind.

Oh. One last thing. We have quite a library of Brooklands’ Books and were frustrated to find that this edition is a slightly different format to all the others. It’s taller, and has a different design of spine. So it sits rather awkwardly on the same shelf, looking a little forlorn…