The four speed records were set on new Triumph Bonneville machines, in a year celebrating the model’s 50th anniversary. One of the Triumphs was naturally-aspirated and the other turbocharged.

Riding a street-legal Thruxton Bonneville prepared by Matt Capri, owner of South Bay Triumph in Lomita, California Cathcart broke the 150 mph barrier to set a new two-way FIM World Record for the flying mile at 152.678 mph (245.711 kmh), and another for the flying kilometre at 152.770 mph (245.859 kmh). Both of these records were in the FIM’s 1000cc Normally-Aspirated Twin-Cylinder Unstreamlined category.

…and on the turbocharged South Bay Triumph Bonneville.

Riding the turbocharged South Bay Triumph Bonneville, also built by Capri, Cathcart established two more new FIM World Records for the 1000cc Forced Induction Twin-Cylinder Unstreamlined class, with a two-way speed for the flying mile of 165.405 mph (266.194 kph), and for the flying kilometre of 165.672 mph (266.623 kph). The mile speed qualifies as a new AMA record, too, with all records subject to ratification by the relevant authorities. 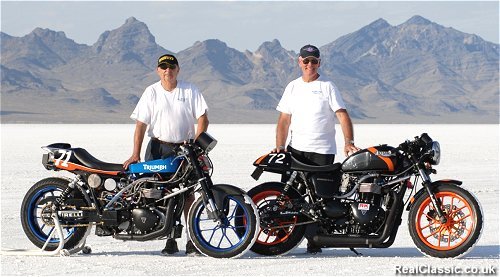 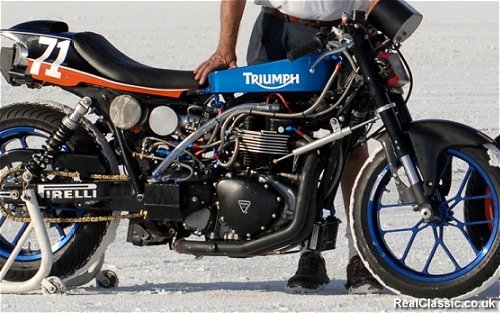 Close up of the turbocharged Bonneville