Two classic motorcycles are up for grabs in current competitions. You could win a Honda GB500 or a Triumph Silver Jubilee Bonneville. Here’s how to enter…

Fancy a free bike worth five grand? This fully restored 1986 Honda GB500TT is up for grabs at classicbikersclub.com in a subscriber-only competition which runs throughout the summer. If you subscribe to RealClassic or any Mortons motorcycling title then it’s free to enter the competition once you’ve registered with the site. You also need to hold a full motorcycle licence to enter the competition, and be available to receive your prize at the October 2012 Stafford Show.

The competition continues until 1st October 2012, so even if you’re not a current RC subscriber you have plenty of time to sign up and get your entry in. Here’s how to subscribe online to RealClassic. Once you’ve signed up you’ll be sent details about how to register at classicbikerclub.com. Enter the competition and you stand a chance of riding off into the sunset aboard this nifty big single. If you’re already an RC subscriber then hop over to www.classicbikersclub.com/news/2012-04/win-honda-gb500tt and send in your entry.

Although Honda’s XBR didn’t quite set the world alight when it was new, the 44bhp twin-port four-valve big single has developed quite a cult following as it’s matured. Read what one RC rider discovered when he sought something ‘a bit classic but with more modern technology.’

However, the XBR/GB comes with all mod cons including a sensitive 276mm front disc brake which is more than suitable for modern traffic conditions; dual Showa shocks with four-way preload settings, and 35mm tele forks. Plus it has the ultimate convenience: an electric start, which is why many riders favoured the XBR over the kickstart-only Yamaha SRX600 back in the day. The XBR didn’t quite find its audience when new but the GB has been much more successful as a classic alternative – and the giveaway bike should burble beautifully through that exhaust system, too…

However, some folk might not be tempted by a Japanese classic. No problem. If your tastes turn to something traditional, then there’s just time to enter the VMCC’s raffle and grab a chance of winning their prize Triumph T140. 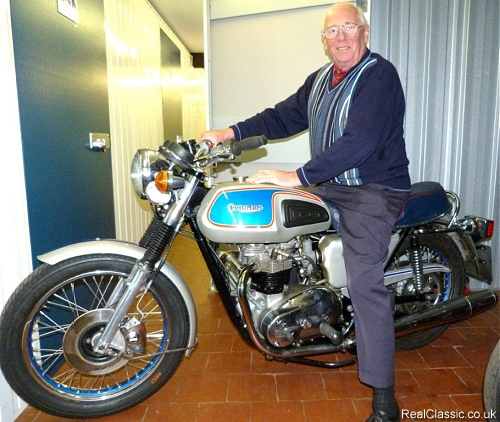 To commemorate the Queen’s Diamond Jubilee, the VMCC appropriately decided to give away a 1977 Silver Jubilee Bonneville. According to our man Matt Vale, the T140J model was ‘the Meriden Co-op’s first limited edition and a resounding success.’ A set of uprated Girling shocks and tricky tyres were matched to the pretty paintwork, and the initial production run of 1000 had to be increased to meet demand. The bike even has some special history all of its own, as it was previously owned by racing Past Master John ‘Mooneyes’ Cooper. And now it’s going to find a new home – perhaps with you…

Tickets for the VMCC raffle cost £1 apiece from www.vmcc.net/tickets.asp or 01283 540557, and the draw will take place at the end of June 2012. There are other prizes on offer in this draw, including a Davida crash helmet and magazine subscriptions.