Everyone should be more sociable. Riding a classic motorcycle is a sociable activity. We’re told. Frank Westworth’s ears have become very bent…

It’s always great to talk to fellow riders. Bikers, motorcyclists, one-trackers, call them what you will – call me what you will! – it makes little difference. Most of them have tales to tell and amusing anecdotes to share; knowledge and solutions are there for the asking, and I honestly enjoy getting out to meet folk, to take a break from the Cornwall retreat and brave the world. Well… sometimes.

In fact, I enjoy this sociability thing so much that for several years now I have invited readers of my own, plainly superior in every way, old motorbicycle magazine to come along and get together. Why not, I asked myself and anyone else who listens to me, which is a small and decreasing number, why not choose a place to sit, chat, drink coffee and stare with appropriate derision at each other’s motorcycles? Why not indeed. So I arranged it, and despite the very worst efforts of the climate it has been a hoot. You really do meet the nicest folk on a motorcycle … not all of them Hondas.

‘What gives you the right to judge motorcycles?’ demanded one fellow.

‘You do,’ I told him. ‘You buy the magazine. So do lots of other superb and generous folk. Because of this extreme kindness and personal sacrifice, I can ride about on many motorcycles, form opinions of them and write about them. Such is the limitless generosity of folk like you, I do not need to do anything else. It’s great. Thanks a lot. Let me order you a free refill of coffee.’

‘I don’t buy your magazine. They’re all junk.’

I observed that although he had a badge pinned to the chest of his shirt proclaiming his loyalty to one of Birmingham’s many excellent (if defunct) marques, he had in fact arrived at this bike meeting in a car. A strange thing to do. But, it’s up to him. A worryingly large group of Royal Enfield riders at the next table grinned a huge collective grin. I shared it.

‘Why don’t you run giant comparison tests like other magazines?’

Although our friend didn’t read my magazine, he plainly knew a lot about it.

‘I thought you didn’t read my magazine,’ I remarked, winningly, ‘which is probably a good idea. The editor’s an idiot.’ An Ariel rider grinned madly, passed over a mug of coffee and shook his head gently.

The nice man pointed at his companion, who shuffled a little in his seat. I smiled him a gently sympathetic smile. 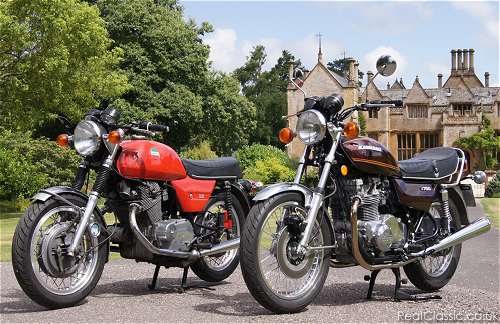 ‘We don’t run giant comparison tests of old bikes because I think they’re pointless,’ I offered. ‘And they are a pain to organise, cost a fortune to do and…’ I was going to share an anecdote about a 1970s Suzuki which had recently failed on test, requiring that it be rolled downhill to snap those apparently crucial riding shots, but I refrained. I drank more coffee.

‘How can anyone compare, say, a 1965 BSA with a 1965 Norton, for example? Compare what? Performance?’ I considered that struggling Suzie. ‘Reliability? Fuel economy? Cleanliness of exhaust emissions?’

Another passenger in the same car at that same motorcycle meet and wearing a similar badge on his polo shirt supporting that same motorcycle marque, dived into the conversation. ‘How can we stop the decline in our club membership?’ A fair question, I felt. ‘How can we attract more members? More younger members? We’re all getting old…’ Which was certainly true. By this point I did not feel in the first flush of vibrant youth. But it is in fact a serious question; many stout club members and I have chatted about it in the past. 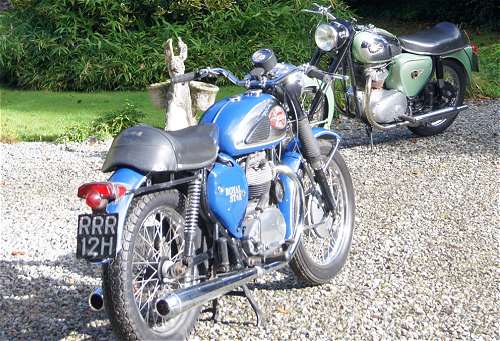 Not all clubs are suffering from declining numbers. This is a fact. Some clubs are staying at their traditional and comfortable levels of membership, while a couple I know well are in fact growing. They have common features. The first is that they recognise that no young girl or guy is going to want to sit in a room surrounded by grumbling old blokes. This is a simple but obvious fact. Like it or not.

It is slightly less unlikely that younger folk, fresh folk if you prefer, would be attracted by the experience of owning and riding our favourite old bikes. I can in fact think of no sensible reason why this should be so, because I am not in the first frolic of youth, but others believe it to be true. So, being highly visible and indeed audible, riding everywhere on these great old bikes, is a great advert for them and for the clubs which support them.

If someone turns up to visit a meeting of the mighty Spagforth OC only to find the car park filled with VW estates and grumbling old blokes, they will not return. I know this to be true, because at the Stafford shows folk tell me this.

If potential new members wander into a clubnight to be treated with indifference and greeted by no-one, it is unlikely they will return. Would you?

Given that there is very little to choose between comparable bikes from any given era, the only real reason a newbie should choose to ride an old bike from one marque over another is that they like the looks of the thing, which are what they are, we cannot change them much, or if the guys who ride them are friendly and helpful and welcoming. And that they do in fact ride them.

I offered all this to the guys at that bike meet. I am a friendly, helpful soul. They sighed a collective sneer, returned to their car and left. I could tell you which mighty national and shrinking marque club they claimed to represent. But I am a kind fellow…