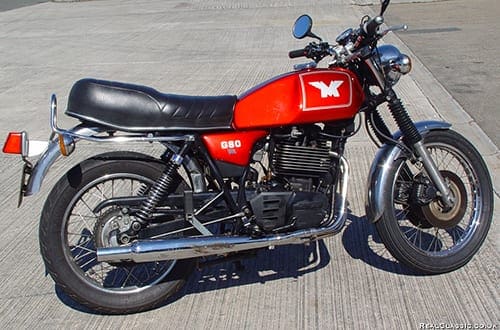 Do you remember when old bikes were exactly that? Old bikes. Nothing more. Some were good old bikes and a lot were not. A few were exceptional, and anyone who actually rode bikes – well, more than just their own – soon worked out which were which. Or not, of course. To this day I have friends who prefer riding Triumphs to Nortons.

As well as all the customary clichÃ© machines – and we all know which they are – the strange affliction of the ‘classic’ moniker started to spread, like a nasty ailment. So although few would argue that a BSA Gold Star is a classic (send all letters of disagreement to the Editor, written on a £20 note; he’s saving up for his own T160 Trident) the mysterious infection spread like wildfire, eventually resulting in delights like the C11G sharing the alleged accolade of ‘classic’. Oh get away with you; they’re just old bikes. And – before you write more letters (maybe we should make that a £50 note) – old bikes are great. Some of them. Sometimes.

Among the hordes of old bikes, quite a few were ignored by Those Who Know; the heroic pundits who feel no fear when it comes to redefining some old horror as a ‘classic’. In an earlier age, I wrote a lot of alleged buyers’ guides to old Brits, and received a decent level of flak because I would inevitably suggest that anyone without an apprenticeship spent on the tools, as well as a profoundly deep wallet and a Platinum AA card, should avoid Scotts, four-valve Rudges and square Ariels if they actually wanted to ride their dream machine for any distance. Cue Outraged of Shipley who will reveal that she rode her Flyer to Murmansk and back every year without fail or failure. Well done.

And while we all argued about the merits of the OEC, radial Rudges and the Scott Three, all the while riding our exhausted non-Bonnie Triumphs and sagging Rockets, mainly because we couldn’t afford a decent Honda, the prices fetched by pretty average old bikes soared to levels undreamed of. This is a great thing, in my view. I have a lot of average old bikes. It is less of a great thing if you have no old bikes and no money and feel that your life is worth enduring any further only if you have a stable of old bikes of your own. Once again, please pen a few words of sorrow to our Editor. He needs a T160.

This lunatic price inflation, inevitable as eggs smelling bad after a few days too many, resulted in several bright sparks deciding that they would build brand new classics. A great idea. How many can you think of? The principle is sound: take all those great old bike virtues and produce a new bike which shares them all, but with added reliability and a warranty. Can’t fail. I once took part in a New Classics Giant Test. The bikes were a Yamaha SRX600, a Honda XBR500 and a Matchless G80. The test took place in central London, and was a most dispiriting affair, despite the Matchless being brand new and fitted with a Rotax engine of almost no charm at all. And I really like Matchless as a marque; one of those irrational flaws which allow chancers to take advantage of my enthusiasm.

Only the Honda was graced with an electric start. The Matchless insanely situated its kickstart on the left. The Yamaha simply hated me. It was a day to forget. One of many where new classics were concerned. Remember the BSA Gold SR? Who could forget it? And having understood (for they are clever) that few riders wanted a new classic, almost all manufacturers changed tack and invented the ‘retro’. I like these. They are good fun and manufacturers feel no need to burden us with feeble brakes and single-cylinder vagaries; they simply build cosmetic tributes to their own earlier models using modern engineering. This is a good thing. Even the Chinese are at it: my weariness was lifted the other day by a nice chap sending me pictures of his Chinese copy of a Honda copy of an earlier Honda. Enter the Skyteam Ace, an imitation of Honda’s Dream 50, which is a tribute to the glorious Honda CR110, a customer replica of the RC110. Classics, every one of them. No doubt about it. 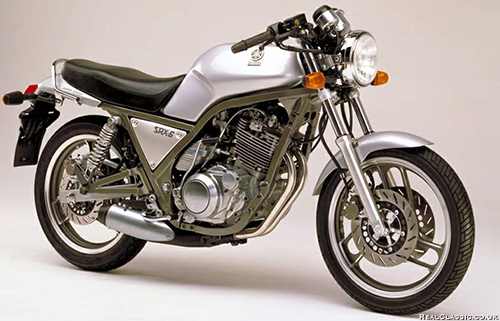 All of which was prompted by my wheeling the Norton 961 Commando around The Shed. I do this from time to time to keep myself fit, which is important for a chap of my age. A pal had wondered whether the 961 is a new classic? Or is it a fake classic, like the XBR or G80 of 1988? A retro, like a Bonneville? Of course I instantly retorted (you should try it) that he should mind his own business. In any case, the 961 is simply a great piece of British motorcycle engineering. No argument to that, said he, it’s just like the amazing new Brough Superior, then? I reminded him that it is possible to buy a 961 Commando – I have done this, so I know it to be true – and they are built in Britain. Spot the differences between the Norton and the hysterically well received BruffSupp. He agreed, and we shared a good laugh.

‘Just like the new Royal Enfield Continental GT,’ he exclaimed. 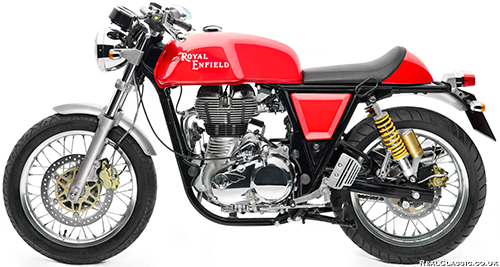