The first part of the story of Waltzing Walter the Rotor-Racer appeared in issue 28 of the magazine but was cut somewhat short. So here’s the whole thing: from drawing board to TT triumph to the National Motorcycle Museum…

You’re probably familiar with the Norton racers of the 1990s; the sleek black beasts which caused a storm in the national championship, and the white charger which powered Steve Hislop to TT triumph in 1992. But did you know that it all started with an out-of-hours project, and a crashed-and-scrapped ex-police road bike?

The rotary-engined racer was the brainchild of Brian Crighton, himself an ex-racer and, in 1987, the service engineer at Norton’s Shenstone factory who tended police demonstrator machines. Brian was convinced that the air-cooled twin-rotor engine then fitted to police Nortons could be tuned to give much better power than the standard 85bhp. Initial attempts to increase the engine’s output pushed it to 96bhp on the factory test-bed – but it needed another 20% on top of that to compete against the best from Japan.

Crighton figured that alterations to the motor’s induction and cooling systems could make the difference, and he was determined to try. ‘It was always my dream to build an all-British machine that was capable of winning a world championship’ he said, and he had a chance to make that dream come true.

Initially, Crighton’s predictions of 120bhp failed to convince the factory’s managers, but top man Philippe Le Roux understood that any success on the track could raise the profile of the marque immeasurably. So they agreed that Crighton could work on a crashed and written-off police bike during lunch breaks and in the evenings. So Crighton was allocated space – in the unused caretaker’s cottage! – for his unofficial project. 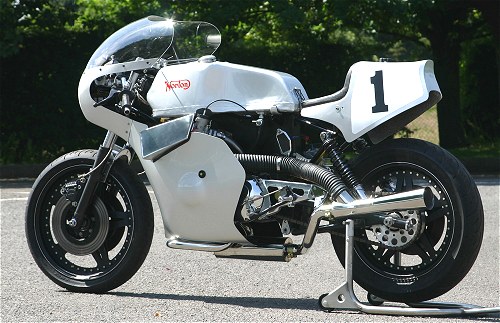 With the help of a few fellow-believers, like Dave Evans and Bob Rowley, Crighton started to modify the engine’s carburation and airflow to separate the induction and cooling systems. The alloy boxes you can see on the sides of the fairing force air into the 34mm chokes of Amal Smoothbore carbs, and another air collector box under the steering head pressurises the fuel tank and the carburettor float bowls. With this set-up, the first after-hours dynamometer test showed 120bhp. Further tweaks hoisted it to near 125bhp – at the engine shaft, not the back wheel! And that was without making any dramatic changes to the standard engine configuration; just like the road bikes, this engine used steel rotors and the normal 9.5:1 compression ratio.

The problem was not so much how to get more power, as how to transmit it safely to the rear wheel once it had been produced. Bob Rowley had to adapt the T160 5-speed gearbox to suit the rotary racer, and as Crighton started to prove his point so Rowley began to worry.

‘I remember Brian coming past my office, looking in and saying 100… 110… and then 115 as they got more power on the dyno, and I’m getting worried, trying to design a gearbox to stand this. And remember, we had to use standard casings to be homologated for racing!’

The rest of the machine was modified to something resembling race trim, some excess weight was shed by cutting off the rear portion of the pressed-steel frame and replacing it with tubes. The suspension was re-worked to suit the new rear frame; the wheels were Astralites and the brakes by Brembo. After an all-night session in the workshop to get it ready, Dave Evans and Bob Rowley both wanted to ride it around the yard for the first time; Evans took that honour, but Rowley was scheduled to test it for real. 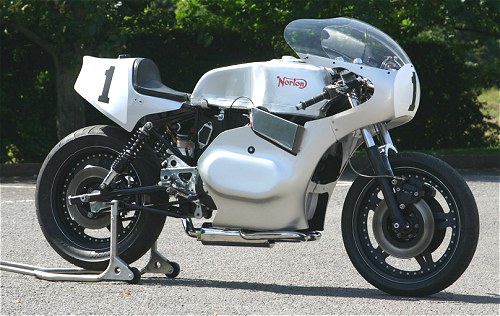 The prototype was taken to the MIRA testing grounds in August 1987, where Bob Rowley wound it up, hammered around the banked track, and took it through the timing lights at 170mph. That figure alone convinced Phillipe Le Roux that funding a racer project would be worthwhile. Meanwhile, Bob Rowley also lapped MIRA at 155mph and in doing so he took the track record for the fastest lap completed by a motorcycle. Not bad going considering this prototype was less than stable; it was nicknamed ‘Waltzing Walter’ because it tended to weave and squirm when the engine’s power was applied. Norton Motors described it as ‘somewhat dangerous to ride’, so Rowley probably deserves double team points for that 155mph lap!

To go any further, the rotary racer needed a better chassis, so a pukka racer with a Spondon aluminium frame was built in six weeks and ridden by Malcolm Heath in a Darley Moor club meeting. This bike was some 40lb lighter and 10bhp more powerful than Waltzing Walter, although it still had problems with its gearbox which packed up during the second race (apparently the bike also had a strange attraction to barely-dressed women!). The rotor-racer needed development without a doubt – as the occasional flame shooting out of the exhaust proved to any rider following it – but this new Norton made a huge impression on the crowd at Darley Moor. Our editor was in that crowd; ‘I was tipped a wink that Norton would have a racer at the Darley Day, so I went to watch – as you do when you’re a fan of the rotaries!

‘The buzz was tremendous, and when the bike hit the track no-one could really believe it. A racing Norton … a new racing Norton. It looked different, sounded amazing, and went like stink. It didn’t appear to handle much, but that just added to the excitement. The buzz around the circuit was that there would be a full factory team. Optimism everywhere. A great day.’

The UK press were allowed to try the rotary prototype for themselves, and they loved it. Mac McDiarmid thought it ‘the single most promising, most exciting machine to hit the tracks since Suzuki’s RG500. As far as technical novelty goes, it knocks anything of any age into a cocked hat.’ He rode the rotor-racer around Mallory Park: ‘Opening the throttle coming out of Gerard’s corner the rear slick digs in and the Norton relentlessly hurtles forward. There’s just time to grab top gear before you’re suddenly at the Esses and wondering who stole the back straight.’

So what became of Waltzing Walter? Well, the bike which started it all spent quite a while kicking around the yard at Shenstone, and then moved to a private collection. It was recently bought by the National Motorcycle Museum, and they decided to let Brian Crighton bring it back life before putting it on display. If you’re lucky, they might take it to a track day or two – and then you’ll be able to see for yourself if life for Walter’s rider is still as interesting as it was for Bob Rowley, back in 1987…

If you’d like to see Waltzing Walter along with the other rotary racers in the NMM collection, then you’ll find them on the M42/A45 junction. The NMM is open every day from 10am to 6pm (except 24-26 December). Admission costs Adults £6.95, Senior Citizens £4.95, Children (under 15) £4.95, Family Tickets (2 adults with 2 children) £20. See also www.nationalmotorcycle museum.co.uk