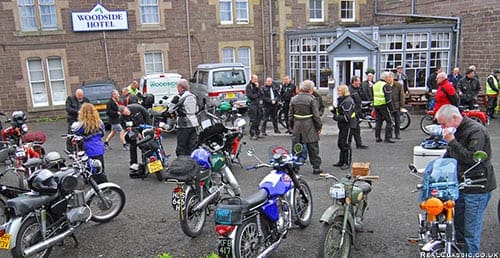 Vintage Motorcycle Club eligibility now includes all bikes made before 1990. The Scottish Tiddler Tootle and The Blue Haze Run are events tailor made for bikes of 25 years or older and 250cc or smaller, as Alastair Alexander explains…

Two myths about the VMCC are that you need a really old bike to be eligible for the Club’s events and that suitable bikes are prohibitively expensive. They are simply not true as any motorcycle made before 1990 is eligible and a Honda Fireblade could soon be used. Hardly the popular image of an old vintage machine?

As to the cost of getting mobile, bikes from the 1970s and 1980s can be bought for quite reasonable money and especially some of the Japanese models. Size does matter so when you get down to 250cc or smaller then a whole host of machines can be bought, ready for the road or in need of some light tlc., for well under a thousand pounds and quite often for a few hundred.

Alastair Alexander, VMCC Area Rep. for Scotland said, “In Scotland, the VMCC has introduced some runs for lightweight bikes with the aim of broadening the appeal of the Club to younger members and especially riders whose budgets are limited. Lightweights also have an increasing relevance to our older motorcyclists who value being able to keep riding actively on a machine which is light, easy to manoeuvre and has the magic of an electric start.”

In 2015 the choice of Scottish lightweight runs has stepped up a gear. Clyde Valley Section are organising “The Blue Haze Run” on 19 April starting from Chapelton near Strathaven. Any motorcycle over 25 years old can enter but the focus will be on two strokes. The second Scottish Tiddler Tootle will start at Doune , near Stirling on 24 May ( Contact  jjleddy@talktalk.net or Don Riley on 01698 854390). Clyde Valley Section’s Rock ‘n’ Roll Run at Crossford on 20 June will have an alternative 40 plus mile route suitable for lightweights (contact Willie Malone on 01357 521375).

All of these VMCC events are open to non-members so come along and join in the fun.