Before ordering this weighty tome, any true Velo enthusiast should double check that there’s not already an earlier version of the text safely stashed on your bookshelf. This is the third edition of Rod Burris’ comprehensive chronicle, which covers the pushrod models in considerable detail.

The 2010 edition has been enhanced and expanded and now runs to over 200 pages as a large format hardback, with more than 400 illustrations, many of them gloriously reproduced original factory brochures and catalogues.

The title is a little bit misleading. At first I couldn’t understand why the smaller capacity machines which came before the MSS were excluded – the name seems to suggest that the MOV and MAC don’t get a look in.

That’s not an entirely accurate observation, because the junior models are indeed covered in the first chapter of the book. However ‘Velocette Motorcycles’ is weighted far more heavily towards the post-war and 1950s-on variations of the breed so the 500cc MSS steps forward to take centre stage, along with the Viper, Venom, Scrambler, Clubman, Special and Thruxton offshoots.

Chapters One and Two detail the marque’s history, taking the early and vintage years at something of a gallop, then going into greater detail for post-war evolution of the Venom and Viper. Racing successes, record breaking, factory personnel, contemporary tests and customer correspondence all contribute towards an overview of a company which was striving to build the best motorcycles it possibly could, sometimes in trying circumstances.

One three-page letter from Veloce’s MD, Bertie Goodman, in answer to various queries from a demanding customer, demonstrates how the top brass were intimately involved in the development and quality control of the company’s models. Goodman discusses at length items like increasing the oil capacity, noting that ‘strangely enough the best power is obtained when the oil is at 82 degrees centigrade which is approximately the temperature which is reached under very hard driving conditions.’ You can almost hear the MD’s teeth grinding when he says in that same letter; ‘two of the failures… were caused by people assembling the clutch incorrectly’ in regard to poor results at Thruxton. See. Even Veloce’s own mechanics couldn’t cope with the Velocette clutch! Seriously, material like this is extremely precious, and it is wonderful to see it reproduced in full. 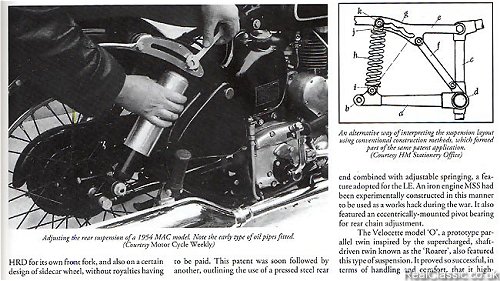 The second half of the book goes into extreme, nut, bolts and part number detail about the development of the M-series machines into and throughout the 1960s.

There’s a full technical analysis of the engine, accompanied by many exploded and clearly labelled diagrams, a similar discussion of the clutch, primary drive and gearbox, a full review of the frame, suspension, brakes and such, plus a summary of the current situation and which modifications and upgrades best suit the breed. This chapter will be particularly useful to any owner and incorporates a wealth of photos, recomm-endations and hard-won information gleaned from personal experience.

For some, the historical documents in this book will be worth its purchase price. Every chapter contains a treasure, like the original lap charts from the 1957 24 hour race in Barcelona (24 Horas Motociclistas de Montjuich, 1957) which show a single Velocette battling all kinds of Continental competitors to come in 13th. 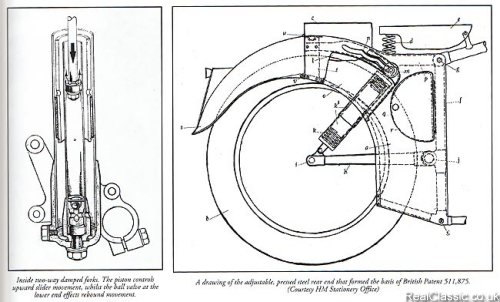 For those people who own a later Velo, then the second half of the book provides invaluable insights into how it was originally constructed and how it can be adapted today to suit modern roads and provide realistic reliability.

Many of the brochures and catalogue which are reproduced here are very hard to find elsewhere. I particularly enjoyed seeing the original, black and white photos of the different departments at Veloce’s Hall Green works – plus a shot of Bertie Goodman giving an experimental Clubman Venom an extreme outing at MIRA in 1958, breaking the 100mph barrier! The illustrations are all very well captioned, and the author’s attention to detail is to be applauded. Rod Burris has been gathering the material which has gone into this book for something like four decades… and it shows.

If you already own an earlier version of this book then you’ve something of a headache; the extra info included in the new edition is very valuable and interesting. The 2010 edition is also a handsome volume in its own right. But it’s also quite expensive, so you may not want to splash out on a duplicate copy. Unless, of course, you can pass your old edition onto a chum and keep the new one for yourself…

Available from Amazon, normally at less than the RRP.