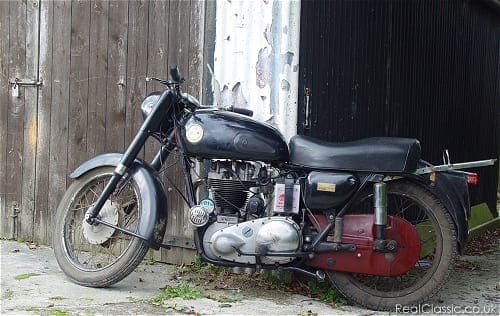 Rowena Hoseason wondered which classic motorcycle best encapsulates the essence of the typical Brit: a BSA single? A Triumph twin? A Villiers two-stroke? Here’s your chance to vote…

It began while riffling through the pages of ‘The Strange Death of the British Motorcycle Industry’. I came across a page about the Vincent Black Shadow which the author suggested ‘might well be one of the most famous motorcycles ever built.’ Fair enough. I’ll give you that. The Shadow probably is one of those machines which is universally well-known outside of motorcycling circles. However, the segment then finished with the suggestion that the Black Shadow was ‘one of the finest achievements of the British motorcycle industry.’ I could argue either way on that statement. But then coffee arrived and I was sufficiently distracted to forget all about Vins and their impact on world history.

Until three days later when we strolled around the Big Bike Shop in the Big City. In pride of place at the Big Bike Shop stood… a Vincent Black Shadow. Fully restored. Locked inside a giant Perspex display box like one of Damian Hirst’s dead animals. That says a lot all on its own.

So I read the info board next to the bike and softened my initial reaction somewhat. This was the actual motorcycle which the firm’s founder had owned back in the day, cherished for donkey’s years and recently renovated to better-than-new condition. That seemed entirely reasonable and comprehensible, especially to someone like me who owns more bikes than I can possibly ride but still somehow doesn’t seem to have found exactly the right one yet.

I read more of the blurb, which explains to riders of modern motorcycles exactly what they’re looking at, assuming they’ve previously never encountered a big Vin twin. And I came across another assertion which, like the one in the book earlier in the week, sent my eyebrows upward in astonishment. Apparently, the Vincent was – I’m paraphrasing now cos I can’t remember the exact wording – the ultimate British bike, the pinnacle of the original British industry, the machine which best typifies the breed. Etc.

Eh? Excuse me? Was the Vin twin really one of the finest achievements of the old British industry? Did it really typify British bikes of the last century? Was it one of the most popular British motorcycles, or one of the best-selling British motorcycles? Did it feature a typically British engine configuration – like a long-stroke single, or a pushrod parallel twin? Was it a best-seller? A design which stayed in successful production for decades? Or… was it something else entirely?

You may have gathered that if asked to define the typical British motorcycle of the old industry then I would not under any circumstance have chosen a Vincent twin. Which set me to wondering: which model does accurately sum up the old British motorcycle industry? Which single bike does come closest to encapsulating the essence of the traditional British bike?

I know which machine I would choose, and then I asked Frank for his view, and he immediately picked an entirely different motorcycle. So we extended the debate to include the RealClassic magazine subscribers over on our Facebook group. And they came up with a short list of other possible candidates, which we present here for your consideration: