From the Speed Twin to the first Bonneville, this glossy hardback tells the story of Turner’s iconic twins…

Crowood’s MotoClassics series has gradually evolved over the years, so I suppose I shouldn’t have been too surprised to discover that the latest volume in the range is a slightly different format to its predecessors.

Spooky, actually: most motorcycle models get bigger and heavier the longer they stay in development and a similar process has happened to Crowood’s books about bikes. ‘Triumph Pre-Unit Twins’ is slightly larger all-round than the rest of the series.

That’s great, because the photos are bigger, there’s space for more text (it’d be interesting to know if this volume actually contains more information or if it’s just the presentation which has changed), and the book falls open naturally without damaging the spine. The smaller hardbacks can be a little reluctant to open wide, which makes it tricky to read the last few words of each line. So overall, bigger may in this case be better.

It has seriously mucked up my bookshelf display, however. An unruly spine now juts out just where it shouldn’t. Huff.

Regular RC contributor Matt Vale has penned half a dozen of these titles already and the Pre-Unit Twins edition follows a similar format to the others. The first chapter provides an overview to Edward Turner’s revolutionary twins. You can’t even begin to think about considering Triumph twins without explaining ET’s role in their development, and indeed that gentleman makes his initial appearance in the very first line of text and his influence is felt throughout the book.

The next third of ‘Pre-Unit Twins’ comprises a meaty model development history. It’s a monster chapter, broken down into easily digested chunks by model, and covers the Speed Twin, Tiger 100, 3T, 6T, T110, TRW, Trophies and the first Bonnevilles plus associated offshoots. Each spread includes a couple of photos with captions to help identify the each year and model, and the main narrative is broken up with Crowood’s extra info panels. Presenting the information in this way tends to lead to a lot of flicking back and forth – but it does mean that supplementary minutiae can be absorbed at the reader’s leisure and they don’t intrude on the more general history. Me, I was fascinated to read a couple of pages about the WW2 generator unit which later found its way into the TR5 (because I’ve ridden one of those very bikes recently), but I can see that it’s the sort of section some folk would want to skip.

The boxouts are a natural way of presenting technical info, and Matt usefully contrasts detailed specifications across a model’s lifespan – giving vital statistics for the Speed Twins of 1937, 1948 and 1958 for instance. Scattering the tech specs throughout the timeline instead of compiling them all together in one appendix does make it harder to find a single fact fast, but again it probably means that more people browse the info as they go, rather than skipping an entire section at the end. I did need to use the index a couple of times to find specific details, and where a particular bike is mentioned repeatedly you have to check plenty of pages to track down its core data.

One quarter of the book is given over to a detailed technical description of the Pre-Unit machines, going into greater depth than in the development history and highlighting the similarities and differences between the models. This part incorporates plenty of practical pictures – cutaway drawings of the engines, how a bolt-up crankshaft comes apart, the visual differences between conrods and big ends from subsequent years – which will help anyone about to tackle their first Pre-Unit rebuild. That’s followed by a shorter chapter detailing how the Pre-Unit Twins fared in competition (including the famed Bonneville speed record), and the book wraps up with a series of owner profiles, where experienced riders comment on their own machines. 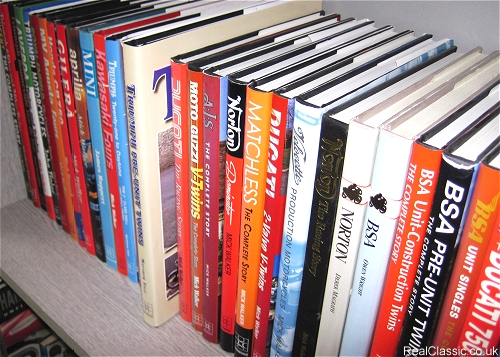 This final section makes for especially enlightening reading. It’s interesting how owners will comment on specific issues — snapping spokes and split oil pipes on a T100; choosing the right tyres for a T110; keeping to A-road speeds on a TR5; replacing the Solex carb on a TRW – but few felt any need to criticise the Pre-Unit bikes’ infamous handling flaws. In fact, most owners were complimentary about their bike’s steering and performance in ‘classic’ use. Mature riders who stick to speed limits and keep their Triumphs well maintained seem to avoid the worst of the Triumph weave…

Unlike Matt’s earlier model profiles, this book doesn’t contain a record of a full strip and rebuild of an example machine. But there’s plenty of other info to keep us entertained, including snippets on Rodark panniers, building Tritons and choppers, Police machines, and so on.

There are plenty of other books about early Triumph twins and the subject is a vast one where it’s possible to get utterly embroiled in infinitesimal information. This definitely is not a restoration guide (look to David Gaylin or John Nelson for a plethora of parts numbers, valve timing, cam profiles and the like). Instead it’s a very useful overview of the original, iconic incarnation of the Triumph twin, with some excellent photos to help with model identification. Matt’s style of writing is informal and easily accessible, so like his other books this volume is a pleasure to refer to – not a chore where the language acts as a barrier between the reader and the information.