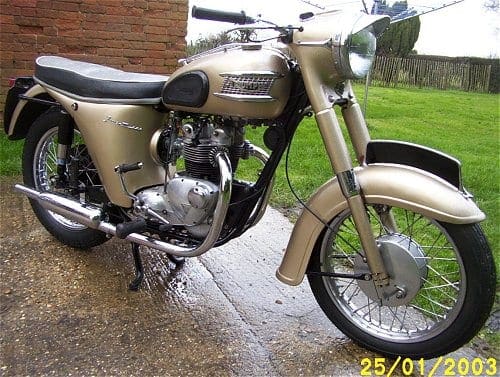 Shock-horror! After much online debate, a RealClassic.co.uk reader splashes some cash on a shiny Triumph twin! Paul Webb explains how he’s fallen in love with his second-ever Britbike, and now all his thoughts are golden…

Somewhere on this page you should see some photos of my newly acquired Triumph 3TA, one of the rare 1964 bikini model variety in gold metallic. It’s ever so shiny and doesn’t seem to fall apart after 95-mile trips.

I went up by train to Richard Gaunt in Burton-on-Trent having visited his premises last week with the intention of buying a Matchless twin. The inexpensive little Triumph persuaded me otherwise as fond memories of the Speed Twin I had 10 years ago flooded back, And still I bought the 3TA, I hear you say!

I decided to take my courage and my breakdown scheme membership card in both hands, and ride my new Triumph home to Bedford. Even Richard wasn’t sure about how good a cunning plan this was. He nor I needn’t have worried — she came back a treat. If there was one thing, it is that when you took a big handful (OK, a 350 size handful) she seemed to gasp for fuel a bit. Ease back a bit and she went a treat. Running a bit lean, or a bit of grot in the fuel or fuel tank? Am sure I will soon sort that out.

Feeling really brave I took her straight for an MoT as soon as I reached Bedford, which she sailed though. It was suggested that wheel bearing renewal fore and aft might soon be necessary. Of course Officer, I had pre-booked the MoT and hence was permitted to ride her on the public road!. The front brake was pronounced as OK — the tester should have tried it out on the road — he’d have called it non-existent if he had!

She’s a very nice sounding, smart looking little thing really. The exhausts gleam and purr all at the same time, the frame, paint and even her little nuts and detailed parts are all nice and shiny. But she’s not so good that I won’t use her if rain is threatening. As my confidence grew, I really began to feel at home on her, and I even semi-chucked her round a roundabout at some point. Wow!

I already am hankering for something bigger, either a 500 single or a 650 Thunderbird (or both!) are possibilities, so watch this space. Must go now, as I want to go and look at her again, listen to that engine purr, and generally get carried away with finally acquiring my second ever British motorcycle. 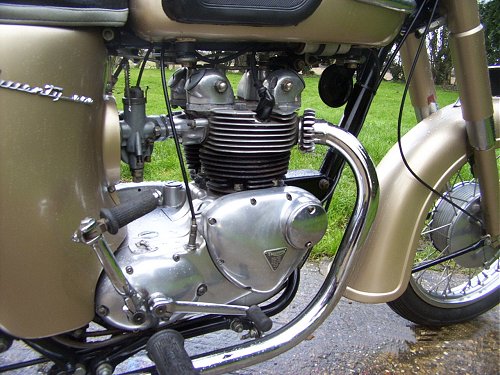