After 14 months of hard labour, Dave has turned a miscellany of motorcycle spares into a real live classic bike. But now he has to make it legal…

The bike ran and rode well, so my attention now turned to the MoT. I rang my local motorcycle tester to arrange an appointment. But unfortunately they couldn’t fit me in until the following week. This wasn’t too much of a problem, as it would give me some time to sort out some insurance and make sure all was OK.

The fateful day soon arrived and it was glorious sunshine, I wheeled the Tiger out of the garage and gave it a final once-over before setting off. I have to admit that I was a little nervous about the coming test. What if it failed dismally? It would be like starting all over again. Still, it had to be done so I got my gear on and set off for the testing station, which was a local motorcycle mechanic in the centre of town.

I arrived about a half hour early for my pre-booked test as I had allowed plenty of time for any problems that may crop up on the way. I needn’t have worried, I had a very good journey and everything seemed to be running OK. There was quite a gathering of bikers milling around and my Triumph raised quite a bit of interest.

Then came the time for the MoT, the man came out and took some details from me before starting the test. He wheeled the Tiger into the shop and I looked on in anticipation. I was pleasantly surprised that the test didn’t appear to be too drastic. After about 15 minutes it was over and I was happily clutching a new MoT certificate. I was quite chuffed that it had passed with flying colours, the nice man in the shop had also commented on how good it looked and took some time to chat with me about the restoration. With the ordeal of the MoT over I set off for home. I made the most of being able to ride legally from a pre-booked MoT and rode the long way home!

All I needed now was a registration document. A mere formality.

Oh how wrong I was.

Although I had what I thought to be the original number plates, I didn’t have any paperwork to prove their origin. I had already failed dismally to find any of the original registration documents. I had written to Glamorgan Council, where the Tiger would have been first registered, but they informed me that they had kindly destroyed all their vehicle registration archives. I had also telephoned Swansea who didn’t have any record of the registration on their computer either, so it looked as though I could only have an age-related plate. I wasn’t too disappointed, as an original number is probably only relevant with the original documentation to back it up. 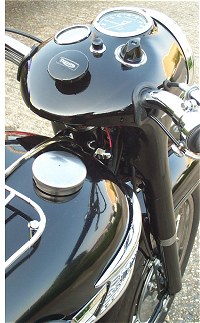 I paid a visit to my local DVLA in Chelmsford, I had all the forms filled in, the new MoT and insurance certificates and a dating certificate from the TOMCC. It was a bit of a letdown when I was told that the girl who deals with these only works mornings, so I should leave it all with them and someone would contact me. I made certain before I left that everything was in order. I even offered them photographs of the engine and frame numbers just in case. I was told ‘no, there’s no need for any photos the paperwork’s all we need’.

More disappointment, I had thought that as long as all the paperwork was in order it would only take a couple of days at the most to process my application.

The couple of days I had hoped for turned into a couple of weeks so I got on to the phone. You have to speak to Swansea first, then they get someone at your local DVLA to phone you back.

Sure enough the telephone rang and a very kind lady informed me that their vehicle inspector would be phoning me. Right on cue about an hour later the vehicle inspector was on the phone asking if he could come and inspect the Triumph.

I had been warned by the TOMCC that some offices insist on inspecting vehicles but thought that as nothing like this was mentioned when I took in my application, I would be OK. ‘Oh no, we inspect all applications’ was the response from the inspector; ‘when can I come round?’

The appointment was made and after juggling work commitments I awaited eagerly for the visit. Despite the annoyance of the red tape it was encouraging when the inspector turned up and had a genuine interest in the restoration.

He spent at least 45 minutes looking and chatting about restorations in general and even said that they would search their archive to see about getting the original number. He couldn’t make any promises, but I could be sure of getting an age-related number, probably a Scottish one as that was all that was left. Why they would leave Scotland to last is anyone’s guess.

All I could do now was wait. It got to a point when I was eagerly checking the post every morning. It was getting more frustrating every day. The weather was beautiful and my Triumph was sitting in the garage just waiting for a bit of paper from the DVLA.

Another three weeks went by with me patiently waiting, I telephoned again and went through the same procedure of talking to Swansea and having someone call me back. The lady that rang informed me that the delay was because they had been searching the microfilm for records of the original registration. I couldn’t really complain as they were doing me a favour. Unfortunately though, they hadn’t uncovered enough evidence to give me the original number but were happy to issue an age-related plate.

I tried to find out if there had been any information on the original registration, but she was a bit evasive and just said that there was no copy of the original logbook on the microfilm. I didn’t push it any further as I had intended to get an age-related plate anyway.

So it was after another three weeks of waiting that the brown envelope finally dropped through the door and the Tiger had a nice new number (not Scottish after all) and I could order the plates.

In the meantime I printed a temporary number on the computer and set off for a ride. I could only hope that we would have a sunny autumn as I had missed most of the good summer weather!

Still, all things come to those who wait and believe me I did my fair share of waiting. Now, however, it’s time to do some riding… 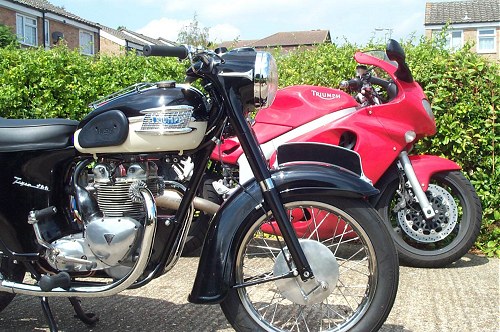