It’s a winner! Stuart Bidwell’s Trident collected a pretty prize during the 2004 summer show season. But when he bought it, Stuart thought it was ready to roll…

The final production incarnation of Triumph 740cc triple was the T160, built between 1975 and 1976. With its electric start, left-side gearchange, five speed gearbox and sleek styling, this is The One To Have for those modern riders who want three-cylinders, decent brakes and genuine dual-carriageway performance from their classic. As such, a decent T160 can command a sizeable price – look in the RealClassic classified ads and you’ll be hard pressed to find one for less than £4000.

So Stuart Bidwell was quite prepared to pay that much for his T160 when he bought it in 1995. The bike was 20 years old and had just 3200 miles on its clock – it should have been the kind of bike you could just ride away on. Should have been… but as Stuart explains; ‘I was robbed at the time! The condition was well below what you could call “reasonable”. So since I’ve had the bike I have almost completely restored it.’

That’s a big project to sum up in a small sentence, as Steve Wilson explains in his British Motorcycles Since 1950 series: ‘A Trident is not the most convenient of machines to work on. The centre spark plug, at a different angle from the outer two, is difficult to get at with the tank on, and the tank has to come off for access to the oil cooler. Very thin spanners are needed for the cylinder barrel nuts, and most head bolts and base nuts are inaccessible to a torque wrench. The centre exhaust pipes have to come off in order to remove the sump filter.

‘Having said that, for the enthusiast servicing is lengthy rather than complicated.’

Frank Westworth, writing in the British Classic Bike Guide, agrees; ‘The T160 can be an expensive model to run, with high fuel consumption and high oil consumption to match. And many owners could feel intimidated by the complex and slightly unfamiliar design, preferring to run a twin as a result. Do not be put off, however. Although there are pitfalls for the unwary, owning and riding a Trident is a rewarding occupation and providing its maintenance is by the book you can have many happy miles together. But beware of buying one that smokes, rattles or is not fitted with a healthily reading oil gauge. And join the TR3OC first anyway.’

Stuart probably could have done with that advice before he bought his T160, but… instead he set to rebuilding and upgrading it, doing much of the work himself; ‘as much as I am capable of’ he explains. This meant fitting new alloy rims with stainless steel spokes, upgrading to a twin disc front brake plus new master cylinders and braided hoses all round, sourcing stainless steel engine plates and chainguard, new fork seals, fork shrouds and carbs – ‘and they all shine like glass now as I have polished them up’. The list doesn’t stop there – inside, the engine has been fitted with new rings and pushrods, and Stuart fitted an oil gauge from LP Williams.

The petrol tank, oil tank and side covers were painted, and even the pushrod tubes have been re-chromed. And this is just the short list of Things Done; ‘I’ve had to do many more things, too many to mention, but it’s worth noting that I changed the standard exhausts to ray-gun silencers which is NOT a straightforward achievement on this model!’

Look closely and you’ll see that Stuart’s T160 even has a handsomely upholstered saddle, so it might even be comfortable for more than a hundred miles – unlike the standard Trident item.

All Stuart’s work paid off eventually, because the T160 certainly attracted the attention of the judges this summer. More importantly, Stuart’s been able to clock up a good few thousand miles on it now. 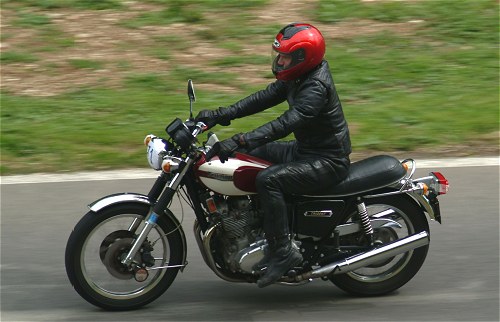