So Dave had just taken his first ride on his rebuilt Triumph Tiger… and then he stopped to look at it. Ooops…

After riding (on a bubblewrap seat) to the end of the road and back, I decided to let the engine run for a few minutes so that I could get the tickover adjusted on the carb. This was when I noticed that one of the exhaust pipes was getting hotter than the other and starting to blue slightly. This was a bit of a mystery so some investigation was needed. This came via a posting on the RC message board (thanks guys) I followed some general advice and following the re-adjustment of the tappets, the problem seems cured.

Now that everything appeared to be running OK I set about fitting the bathtub and generally tidying up any loose ends. I still needed a rear numberplate and light holder, a seat and a speedo. I hung on for a couple of weeks, I had been scouring the small ads in various publications without much luck.

It was no good I would have to buy new items. I ordered a reconditioned speedo from David Woods at Chronometric Speedos and the seat and rear numberplate from Tri-Supply.

These items were all I needed to finish my restoration and I awaited eagerly for them to arrive. I wasn’t disappointed and both parcels arrived within a couple of days. I couldn’t wait to fit the parts to get finished.

I started to fit the rear numberplate on a Friday evening, and it seemed quite a straightforward job. I already had the wires in place for the rear light unit so it was just a mater of connecting the wires and fitting the numberplate to the bathtub. This I did without any problem and I was even happier to see the rear brake light worked with a minor adjustment to the switch. 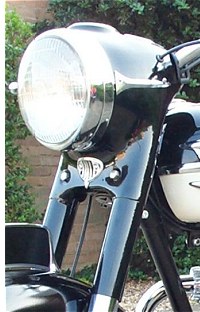 This was where the trouble started. By this time it was nearly 10pm and getting rather dark. I had got my lead light from the garage to add to the dim garage lights. I was getting tired and frustrated, I just couldn’t seem to get the rear numberplate to go back on. I was getting annoyed and came close to scratching the paintwork on the bathtub when the screwdriver slipped for about the fourth time. This was the sign to give up and try again tomorrow.

I put everything away in the garage, this is an art in itself as space is a premium. I have to manoeuvre my Triumph Sprint ST around whenever I work on the Tiger and everything is a snug fit. I felt pretty despondent when I shut up shop at around 11pm that evening and went indoors to sulk in front of the TV.

I woke early the next morning and was in the garage by 8.30, determined to get everything finished.

It just goes to show what a good night’s sleep and a fresh approach can achieve. I had the bathtub and rear numberplate back together in less than half an hour and turned my attention to the seat and speedo.

This was a breeze compared to the previous evening and I was soon standing back and admiring the finished 1960 Triumph T100A. I looked around to soak up the applause from the crowd, only to find an empty street. It was still only 9.15 in a quiet cul-de-sac in Essex. I wanted to shout from the rooftops that after fourteen months of cleaning, degreasing, painting, spannering and more cleaning, I had finally reached my holy grail.

Instead, I went back in doors for a bacon sarnie and a cup of tea.

Straight after breakfast I re-emerged to gloat over my handiwork. I persuaded my wife to come and take a look and even she was now impressed. All through the restoration I would regularly show her small pieces of shiny restored Triumph. None of them seemed to get her as enthusiastic as I was (I can’t think why). I would get a ‘lovely, what is it?’ or a ‘Mmm, very nice’ but luckily never a ‘how much did that cost?’ I must admit I am very lucky to have an understanding wife who never moaned about the time I spent working on the Tiger.

I stood for some time pondering what to do next, when my wife asked if was going to ride it. Well, I should wait until all the legal niceties are taken care of but… no one’s looking so a quick run around the block won’t hurt. Anyway it will need road testing before the MoT.

The Tiger started second kick and I was soon trundling off to the end of the turning and out onto the open highway. Apart from the short bursts up and down the road during the rebuild this was the first time I had ridden it properly. It was almost like learning to ride again, but I soon got the hang of the foot controls being opposite to my modern Triumph.

The run around the block raised a few minor points that needed attention. The carb needed some fine tuning, everything was fine until it reached top revs when it would give a bit of a splutter. But on the whole it ran very well, I was even surprised that the brakes weren’t that bad.

I returned home with a grand total of two miles showing on the freshly reconditioned speedo. The first two of many, I hope.

Rebuilding a bike is one thing. Making it legal; now that’s an entirely different kettle of cod. Next time Dave has to tackle the paperwork… 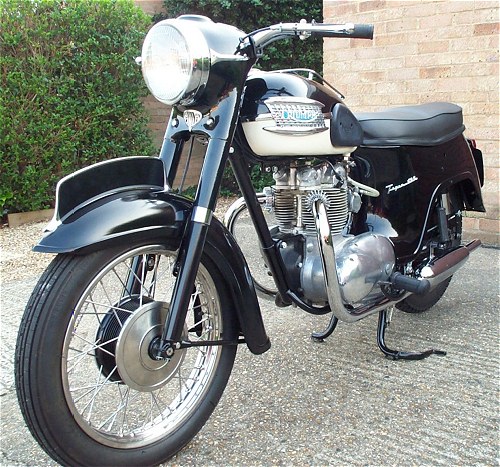