The end of the project is in sight, and Dave isn’t going to let little things like the lack of a saddle and dodgy ignition timing stop him. Pass the bubblewrap, and he’s away!

Following the success of the inaugural engine start I was keen to get a move on and get my project finished. Due to work commitments I didn’t get any time to work on the Tiger until the next weekend but I was still on cloud nine.

Getting the bike started had given me a refreshed enthusiasm and I soon had the exhaust and rear footrests fitted. I also had to re-visit the overflowing carb, which turned out to be a worn float needle. This was replaced and the leak was cured.

Next came the outer gearbox cover and return spring plate again. I had bought yet another return spring plate and felt confident that the problems I had experienced earlier wouldn’t be repeated. Or so I thought. But once again, after fitting the spring, plate and cover, the kickstart lever would still not budge. I was a bit cuter this time and didn’t try and force it. Instead I dismantled it again and sat scratching my head with a cup of tea. I’m not sure what great powers were in the tea [probably either the result of using a RealClassic mug, or NOT using a RealClassic mug; take your pick! TP] but the solution came to me in a moment of inspiration.

When I had fitted the spring return plate I had only turned it until it just fitted on the shaft. This caused it to jam on the inside of the gearbox cover. What I needed to do was turn it an additional 180-degrees and it was sorted. Despite catching my fingers several times as the over-tensioned spring exploded off the shaft, the cover was on and sealed in no time at all. I gently eased the pressure onto the kickstart lever and this time it travelled to the bottom of the stroke and sprung back nicely. Cue another smug look and air of satisfaction.

Now I had the gearbox outer cover sorted I could adjust the clutch and fit the primary chain tensioner and outer cover. Fill with oil and… yet another puddle on the drive. This one was easy to fix: I hadn’t put the drain plug in!

With most of the ancillaries now fitted my attention returned to the engine performance. I turned on the fuel, tickled the carb and gave a large swinging stroke on the kickstart. The motor fired up first time, which pleased me no end. I hadn’t started it for over a week so this was promising. It was still running very rough, so I started to fiddle with the carb. This didn’t make the slightest bit of difference so it had to be the timing.

I had set the timing statically as per the handbook and was reluctant to remove the primary cover again. It was apparent that this hadn’t been accurate. You need to get the magnets on the rotor 1/16″ past the pick-ups on the stator as the points in the distributor open. This is near-on impossible with the naked eye and the fact that I did it without wearing my glasses probably didn’t help.

It was a bit tricky tightening the distributor clamp without shifting the timing again but I managed it and the engine was still running OK. I know that the timing isn’t going to be perfect but without any timing marks or a strobe light it is going to be a bit difficult. Next time I take the primary cover off I will try to see if the rotor is as it should be when the points open. I don’t think it will be a million miles out.

With the engine now running quite smoothly I couldn’t resist taking her up to the end of the road and back. I hadn’t actually got a seat yet, but that wasn’t going to stop me. I got a load of bubblewrap and made a big bundle with insulating tape. This, perched on the subframe, made a comfortable spot for my rear end, so I pulled in the clutch, slipped her into first and I was away.

Another milestone. I had actually ridden my creation for the first time.

In fact it was the first classic I had ever ridden. 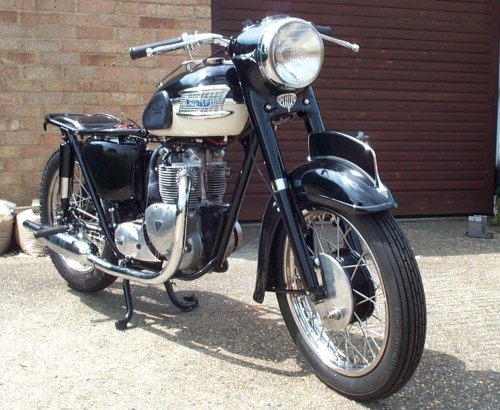 Oh, hang on; it can’t end this well. And you know that it won’t! There’s more on the way from Dave. Come back soon for Episode Six…