When the need arises for a modern-but-traditional motorcycle, Mike Powell didn’t quite know which one to choose. So he let his Better Half do all the deciding for him…

I was quite happy on the 550/4 Honda, mint it was, almost a classic, dead comfy, electric start, but judged gutless by the local bike experts. Then Keith beat us home from Cadwell on the Ducati by about half an hour, not bad considering it’s only 12 miles away, and the decision was made. If I wouldn’t buy a new bike then the pillion pal would! She would provide the cash, but to all intents the new bike would be mine to ride, polish and play with as long as we didn’t get left behind by Francis-Barnetts any more.

Oh, and she would get to choose it too… A short list was prepared.

A 29-inch inside leg precludes consideration of BMWs as I fall off at traffic lights (if no handy kerb is available), a Pan European was attractive, but just a tad tricky if I was to forget the stool needed for remounting, if I could ever get off it that is. The current fad for MotoX bikes with slick tyres (sorry CCM) doesn’t get to me and Banditmania is a concept not holding any fascination at all.

So who makes a machine with classic styling, adequate performance for today’s conditions and a seat which would at least allow me to touch the road with the big toes on stopping? And of course the electric boot, which, as all riders approaching bus pass age will know, is essential.

Kawasaki W650, Harley Sportster and the Triumph Bonnie America looked as though they might come close to doing the job. A quick visit to Black Bear almost solved the problem. But… Nothing wrong with the bikes, but the ‘lifestyle’ concept thing works against them, for us anyway, so we shelve the Sportster for now and move on to Webb’s to check out the America. I don’t know why but in the flesh, or rather in the steel plastic and aluminium, this one didn’t press the buttons either, not even enough to ask for a test ride.

So we’re talking about the up-spec 790cc air-cooled Hinckley twin, for those who haven’t kept up with all the kinds of Bonneville you can now buy. The Speedmaster has a black engine and looks a bit hot-rod; the plain-Jane Bonneville has no glitz and a single clock, and the Thruxton is the latest edition, with caff-race styling and – wow – extra horsepower. The Thruxton has nearly 70bhp and all the others offer 61bhp, which equates to roughly 110mph if anyone is still wild enough to go that far on an unfaired bike… The T100 has two-tone paint, knee pads, a splash of chrome and a tacho, and a seat height of 775mm, like the Bonnie and Thruxton. The Speedmaster or America would be about 55mm (more than two inches!) lower, but I just couldn’t deal with the America’s styling. And the Thruxton was £5500 new, while the T100 is £350 less.

So I took a quick blast round the block, then again with Shaz on the back and fate was accomplished, not least because the Bonnie was red and matched her helmet. On such trivia our destiny revolves.

We didn’t even have to shell out for a brand new one either as the Triumph we rode was the basic T100, just six months old and had most of the desirable T100S bits fitted when new. So, apart from the tank decals, the bike has centrestand, twin clocks, tank rubbers etc, as the T100S, plus Scottoiler, and all at about a grand less than new price, with less than 1000 miles on the clock.

So, our carefully thought-out selection process totally disregarded, what’s it like to live with? The first 200 miles was plenty to establish that the seat was little better than a plank; maybe there is a softer option available, if not there should be for those of us without our own inbuilt upholstery.

And the brakes! Pull this little thing on the right handlebar and the bike stands on its nose, not the sort of thing we’re used to, is it lads?

The T100 is due to come out of the shed shortly, or the next time the sun comes out, so more on the Bonnie later, if you’re all not asleep by now. Sorry Kawasaki, we didn’t get to try one out, but interestingly I saw a W650 recently in the US that was completely Bonnevilled. The owner had fitted Triumph tank, seat, logos and lots of details which made it look superb, much better than the standard Kwak (or Bonnie) ever does anyway. Only close inspection of the engine gave a clue to its origin, the hybrid looked exactly like an updated version of a classic should.

But for now, I’ll stick to the Bonneville.. 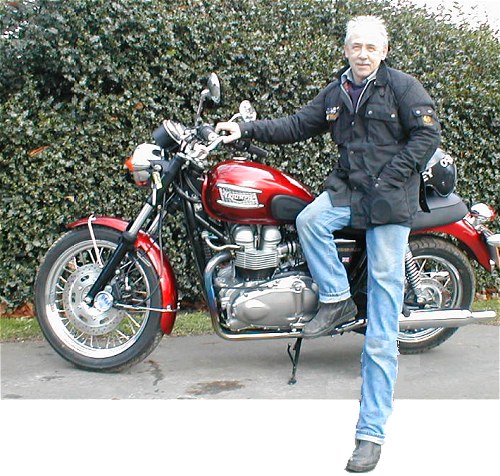