If you’re talking about modern classically-styled twins, then which is actually better? Brady Davis rides both regularly, and so take us down some parallel lines…

My motorcycling career kicked off in the 1970s with a schoolboy interest limited to buying copies of Bike and later Which Bike magazines. My first motorcycle was a Suzuki TS100ER (two-stroke, street / trail bike in blue) in ’81. However what I really hankered after was a big twin, like those I had read about but it just never seemed to happen. I ‘progressed’ via a well-used CB250T (yes a twin but…) to a number of Japanese multis, staying with Yamaha or Kawasaki for a good many years. However my desire for one of those parallel twins which I had seen all those years ago remained.

Time moves on and now, approaching 40 years young, our garage has a small collection of machines with just enough space for one more. Now I ought to come clean and admit that I, or rather we, no — my wife, to be exact, already owns one of the new Hinckley Bonnevilles. Whilst it’s a nice, easy-going and not unattractive bike, it’s not something I feel any real attachment to.

Yet, having said that, I do find myself stealing it more often than not! The truth is it’s easy to ride; I don’t feel the need to squeeze myself into a full set of leathers and tog up as if I’m going to the starting grid of the British GP. I simply grab my helmet, leather jacket and gloves and I’m off. My wife likes it for exactly the same reasons and also because she doesn’t feel as if she needs to ride it at breakneck speed. But it lacks something and I wanted a parallel twin too so I set about hunting something down.

I’ve had many Kawasakis over the years and feel an affinity toward them (I feel the same towards Buell but that’s possibly a medical issue…) so started looking around for a W650. It didn’t take too long to locate a nice one, in my choice of colour (a sort of duck-poo burgundy with cream panels), in nice nick for the right money. The dealer was local so I arranged to have a look. The bike I decided was ‘right’, it sounded spot-on and we agreed a sale, which included a proper service. 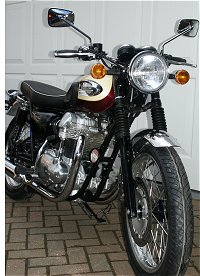 We agreed that I would collect my new machine the following weekend but I really couldn’t wait so sped up there a couple of days early and rode the long way home. I parked up on my driveway, turned the engine off and stood back to admire my latest acquisition. The garage door was open at this point and there stood the Bonnie… time for the comparisons to begin.

The Triumph looks like a modern interpretation of an old style bike, which is exactly what it is. Styling accounts for everything — beyond that it is as easy to ride and live with any modern motorcycle possibly can be. We added one or two extras to compliment the new gleaming black machine when we bought it; a clubman style seat, some knee grips for the tank, a nice neat set of alloy indicators and a set of Triumph (off-road use only), exhaust pipes.

I want to put this issue to rest straight away by saying that these pipes, according to Triumph, do actually help the engine breathe and release more power whilst remaining well on the right side of socially acceptable. They are not overly fruity in tone or volume but are really much nicer than the standard set which stifle any parallel twin burble and leave only a whining engine noise. The seat seems to suit our shapes well and, to my eye anyway, is preferable to the standard fitment.

The W650 looks just like a 1960’s bike, at least to my eye, and is styled from top to bottom, front to back to be just so. The pipes emit a much nicer tone and, whilst being louder than the standard set on the Bonnie, are quieter than the aftermarket items — until that is you start to ride the machine fairly hard, when the exhaust note changes: lovely! The seat has that nice piping edge to it and everything else about the bike seems spot on too.

The W has good quality components throughout including chrome mudguards, a proper centrestand (it also has a sidestand), a high quality tool kit (the Bonnie has neither), and mirrors that show more than an elbow. I should add that I swapped the high-rise, pull-back boulevard cruising type bars for a set of simple English flats with barrel type grips.

The styling even carries over to the rear brake, which is a drum on the W as opposed to a single piston caliper disc on the Bonnie. Hmmm, I thought, but I needn’t have worried as it has plenty of feel and is perfect when a dab of rear brake is required. Braking on both machines is actually pretty good with plenty of feel at the lever, although I think the W is a little soft in the front fork department. 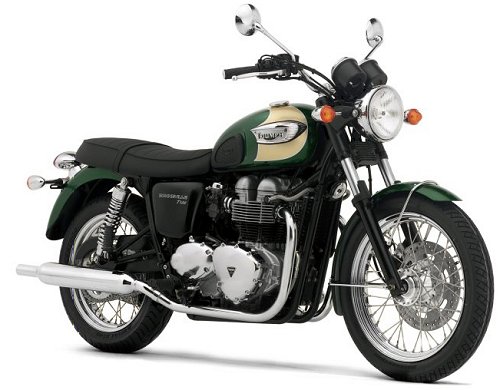 Suspension on both machines is rather basic compared to most of the sportbikes on the road, but in reality both machines ride well offering decent, reliable handling. I have changed the tyres on the W for a set of Bridgestone BT45s, which, according to popular opinion, are a major improvement all around. So far they seem to have eliminated the slight wobble I experienced when throttling off and appear less skittish over uneven road surfaces — but to be fair to the standard fitment Bridgestone Accolades, they were rather thin on rubber!

Now to the riding bit where these two machines are noticeably different. The Triumph delivers its power in a simple, fuss-free manner and I find myself winding the throttle to get the go I’m looking for. You might say that if I’m looking for that sort of go then I should buy another type of bike, but I was hoping and expecting for a certain ‘little something.’

Nothing. It just goes, which is what you want but I wanted it to dig a bit deeper, hitch its skirts up and kick a little.

The W starts off in a similar fashion and then, with around 6k on the tacho (again not standard on the Bonnie although we have now added one), it sort of comes on cam, digs in and hustles. The exhaust notes changes too, adding to the overall pleasure of the ride. I think, so far anyway, that the Bonnie may have the edge on handling but until I scrub in the new BT45s I’ll reserve judgement. Perhaps it’s the fact that I’ve been on the Bonnie more and so I’m simply more used to the handling, either way time will tell.

What I can say for sure though is that the flat bars on the W make it far more comfortable at speed. You’re canted slightly forward with your body weight more evenly distributed, whereas on the Bonnie the slightly pull back bars place more of your weight on your backside. The wind pressure on your chest is far more distracting on the Bonnie so, because of this, the W wins here. One small point; the standard knee grips on the W actually fit and, do you know, I find myself using them too. 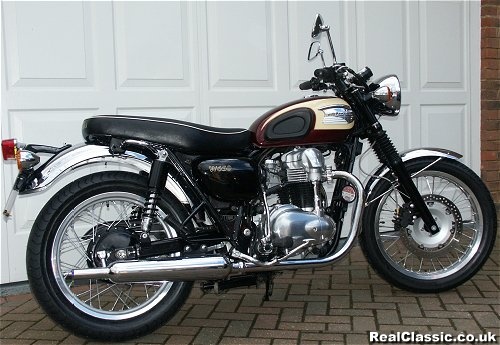 I filled up the W the other day and ended up putting in BP Super Unleaded. I seem to be getting around 120-30 depending on how aggressive I am with the throttle, but I did notice that the W seemed to respond better. Not that there was or is any particular problem — it just seems a little crisper. There is no such noticeable difference with the Bonnie, although to be fair I intend to use the same brand when I fill that bike up next time. I suspect it might be something to do with octane rating but it could just as easily be the slightly warmer weather we’re having!

I insure both machines with the same company, Wicked Quotes, on the same policy as my other machines for a very modest annual premium. I’ve worked out that if I were to just run the Bonnie and the W together on the same policy I’d be paying something around £220 for fully comprehensive.

Of these two modern, classically styled machines I feel the W to be the more authentic but I am talking about styling only. The look for me is right and the riding position is also correct, but maybe the bars can be changed on the Bonnie to similar effect. I’m not too fond of the bevel drive housing (why wasn’t it placed between the cylinders?) but this is a small point when taking the overall ownership experience into consideration.

Both bikes offer a modern take on the parallel twin theme with the Triumph being more powerful (on paper if not in terms of ‘feel’), whilst the W is far better equipped as standard. The level and quality of finish seems to be of a good standard on both bikes but, once again, I feel maybe the W has the edge here too.

My wife loves her Triumph and won’t hear anything said against it, which is perfectly fair but, for me, the W wins the day. I like the whole package and feel it sits well in my garage. I have already started down the modification road and have now changed the fork oil for a heavier weight and fitted a braided hose to the front brake. I’m happy that I’ve made a good choice, one which fills the desire I spoke of at the start of this piece — and the fact that I can tinker too, well, that makes me even happier. 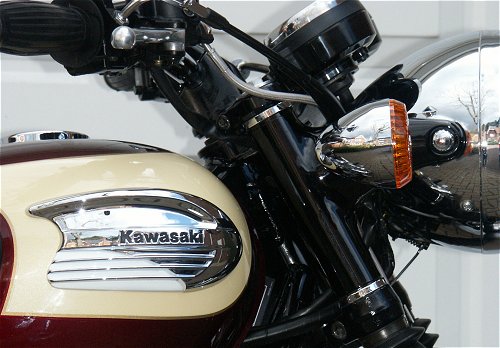