George Wilshaw’s Triton defied classification at the 2004 Stinkwheel RealClassic Bike Show. As we couldn’t figure out which class it belonged in, we had to invent an award on the spot for it…

There’s no such thing as a typical Triton – even trying to define the nature of the beast is like dipping your toes into very hot water. In general, a Triton is a combination of a hearty Triumph twin engine and a sweet-steering Norton featherbed frame… but the term has also become a kind of short-hand for a certain style of classic motorcycle. Talk about Tritons and you expect to see a stripped-back cafÃ© racer come scratching into view, equipped with clip-ons, rear-sets, single seat and racing tank, the kind of bike which would have looked right at home on the Isle of Man fifty years ago. The Triton isn’t so much a kind of classic motorcycle – it’s more like a cult of classic motorcycle.

Some Tritons are more for show than for go. Not so George’s bike. Built from bits in 2003, it’s clocked up some 3000 miles since then, although the longest single journey was a trip from its home in Nottinghamshire to the Ace Cafe. That’s some 2750 miles in a year, ridden on local roads – not bad going for a bike which started life in 1959!

It used to be perfectly acceptable to rip apart two otherwise unremarkable British bikes and build one stupendous Triton out of them but as prices and ‘historical values’ have risen this method of creating a cafÃ© king has fallen out of favour.

It’s still your prerogative if you want to go ahead and do that but you’ll find it cheaper and easier (and less philosophically damaging) to either build one from ‘rusty bits and pieces from autojumbles and adverts’ as George did, or buy all the relevant parts new from the thriving industry which serves the Triton community.

George was given plenty of help with his build by RGM Motors and recommends them for performance parts like the 2ls front brake he fitted and ‘all the other Triton goodies’. Other specialists include the likes of Unity Equipe, who will sell you a Featherbed frame (wideline or slimline) made of aircraft spec alloy – or they’ll even build a brand new cafÃ© racer to your own personal specification.

If you feel yourself being lured by the temptation of a Triton then the first place to try should be the Triton Owners’ Club where you can learn from other owners’ experience before taking the commercial plunge. 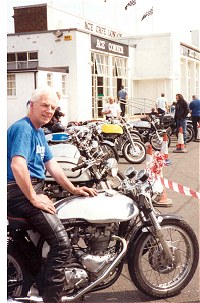 George did all of the work on his bike, at a total cost of £2400 for the parts (just think what the bill would have been if he’d had to pay for the labour!). It’s a stunner, which is why we so wanted to give it an award at the Stinkwheel Show. However, the competition in the 1950’s concours category is always frighteningly fierce – so we went with the flow and gave the Triton a prize all of its own.

The judge’s view? ‘It just had to have a prize. The bike is immaculately presented with extremely neat bracketry – a very well balanced installation of the Triumph engine into the wideline frame.’

Likewise, George loves the style of his Triton. We asked him how it could be improved.

The 2005 Stinkwheel RealClassic Bike Show will return to Beaumanor Hall near Woodhouse in Leicestershire on September 18th. Enter your bike for the concours and you too could win an RC prize. Enter early to secure your free pass: 01790 755695