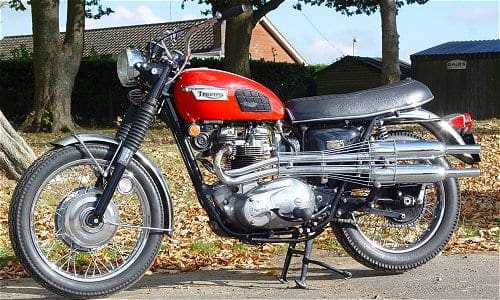 Ever bought more than you bargained for? Jerry Fiford did when he fell for a classic 1970 Triumph Trophy, and he explains how and why to Rowena Hoseason…

So we forgive Jerry Fiford for buying this one. Even though he didn’t mean to. Who wouldn’t have been seduced by such a sought-after machine? Well, his wife probably could have done without it – she was hoping for a new bathroom suite! Instead, Jerry came home one day with the Trophy… like you do.

‘I only went to have a look at it while visiting a friend in Portsmouth,’ explains Jerry; ‘but when I saw it I fell in love, and it just happened to be for sale. It’s a bugger when you know you can’t afford it!’ 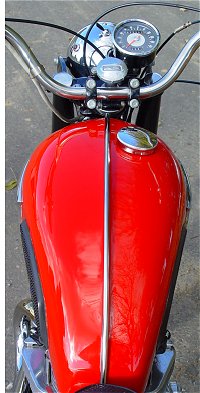 The scrambler style of motorcycle was something of an aberration for Jerry, too, because his other classic motorcycles have usually been of the cafÃ© racer breed. But there’s no clip-ons or rearsets on this Triumph twin – it would feel more at home competing in an American desert race than thrashing down the bypass to the Dutch House. Did Jerry know what he was getting into?

‘I’d never owned a big Meriden Triumph,’ he confirms; ‘only a Daytona 500 and a Twenty One. I was always into BSAs and Velocettes. I do ride a Triton with a Bonneville engine, though, so I half-knew what to expect.’

Or at least, Jerry thought he knew what to expect. But his 650 Triumph had a sneaky surprise waiting for him. The Trophy was being sold as totally renovated and it appeared to be ready to ride, so he collected it from Portsmouth and started to head for home. ‘Unfortunately,’ he reveals; ‘it wasn’t fully run in and on the journey back home it decided to semi-seize. At first I thought I had just run out of petrol — although it did stop rather quickly. After turning on the reserve it started again straight away, so I still wasn’t aware that I had a problem.

‘Then I took it on a South London Triumph Owners’ MCC club run. The people following me on the run reckoned that it was smoking slightly, so I decided to have a look inside. Yes, it had seized — but there was only a small mark to show for it on the barrels.

‘My next step was to take it to the local re-bore shop. They informed me that it wasn’t worth a re-bore and said I could recover the barrels with just honing them out. This they did while I waited – and £10 later I was on my way home. I ordered new rings from Len Baker in Norwich and they arrived in three days.

‘So I went to gap the rings, placed then in the barrels – and they fell straight through. Oops! 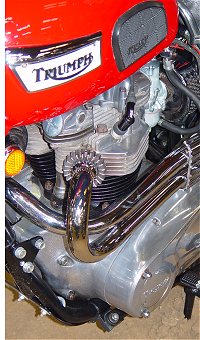 ‘I got straight back onto Len Baker who managed to find me a brand new, genuine Meriden set of standard 650 barrels and pistons. I got the engine rebuilt over the weekend. But next I discovered that the previous owner had fitted a 32mm carb to go with the 750 conversion. So had to buy a new 30mm carb to get the bike back to its correct specification.

‘That was it. I now own a correct TR6C and it is still being run-in (carefully!).’

Jerry’s Trophy is red, when he believes it would have been green originally. He has fitted a centrestand (‘because life without one can be a pain in the arse!’) and would consider making another couple of changes away from its original spec, like adding a rev-counter. He’d also like to address its taste for silent running.

‘I find that the silencers work too well,’ he reveals; ‘and it is a very quiet bike. I might try some different ones that make a bit more noise. With both silencers on the one side, only my left ear benefits from a bit of Triumph roar!’

So life so far with the Trophy has been… eventful. What attracted Jerry to the bike in the first place were its looks, the American styling which ‘makes it stand out a bit from the standard UK bike.’ Unusually for an US-spec machine, however, this TR6C never left the UK so Jerry has been able to trace much of its history – there’s no gap where it disappeared into the American mid-west for two decades! 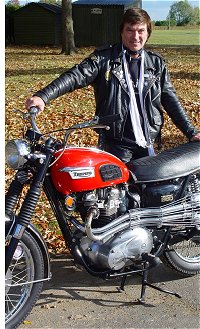 Mind you, Jerry is at heart a sportbike rider. How has he found riding the Trophy? It’s very different from his normal cafÃ©-racer Britbikes. Has it lived up to its looks? Or is it all Show and no Go?

‘I can honestly say that for fast road-riding the handling on the Trophy is almost as good as on my Triton, although on a race track the Norton frame would be superior. The brakes on the Trophy are superb, being a twin leading shoe (I use the same brake on my Triton). I also ride a FireBlade. Sometimes jumping from modern to classic can be a bit scary — especially when you get to the first late braking point. I forget that I’m riding an old bike, but I can make the Trophy’s tyres squeal even when braking at a reasonable speed. The brakes are that good!

‘As this model was made for the Americans to ride off-road as well as on tarmac, I thought the gearing would be low, but it isn’t.’ Aha. 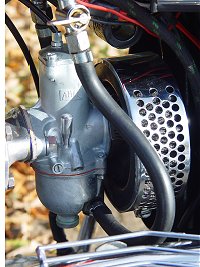 Perhaps we can attribute this performance to the combined effect of the larger Bonnie valves and exhaust camshaft? These were fitted to the Trophy from 1967, together with a slightly wider single carb. The idea was to give the Trophy smooth low speed and snorting acceleration; the best of both worlds. By 1970 the TR6C was hurling out its 40-odd horsepower at easily accessible engine speeds. Steve Wilson once described it as; ‘bringing the revs flooding in at a tweak of the grip’ and maybe that’s what Jerry has been revelling in. Or could it be the delightful freeing-up of the motor, as the new metal surfaces get bedded-in?

‘The engine is still running-in,’ confirms Jerry; ‘so I am only cruising at around 50 to 60mph – but it’s almost there. I reckon that once it’s run-in, the Trophy will cruise all day at 70mph. I think it should

make the magic ton or, if not, very close.’

So all’s well that ends well, yes? Erm, no. Not quite. The Trophy hasn’t quite touched Jerry’s heart, and his other bikes are more likely to be ridden in future. The TR6 was an impulse buy, and it’s a bike which Jerry’s decided he doesn’t want to keep in the long run. Perhaps Mrs Jerry will get that new bathroom after all!

If this TR6C is your dream bike, then go look in the RealClassic Classifieds and see if it’s still up for grabs. 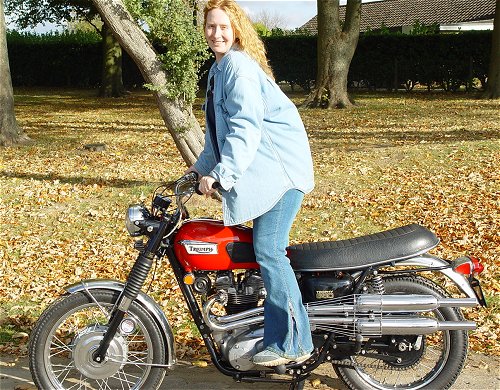