It’s not really a Bonneville, but Neil Owen’s individually-tailored twin-carb 650 twin might, just might, be better than a Bonneville…

‘I have to make two admissions’ says Neil. ‘The first is that this bike isn’t really a 1959 pre-unit Bonneville, although it is a pre-unit Triumph with a re-tuned 1959 engine. The second is that I disliked the nacelle, bathtub and valenced mudguards when I bought it in 1964 — and I am still not a fan! There. Sacrilege over.’

Neil’s description of his Triumph’s condition is that it has ‘been developed.’ That’s a good way of describing it! The bike left Meriden as a 1957 T100 but major engine failures (a broken conrod — twice — and a broken crank) convinced Neil to go for a 650 motor with the one-piece crank. It was a good move, he reckons, because ‘engine reliability over the years has been exceptional.’

The speedo was zeroed when the machine was upgraded to 650 status, so the 45,000 miles now showing are the genuine article, the distance travelled since about 1966. Neil says; ‘that’s modest for over 35 years but in the intervening period children have come and fled and there have been other bikes in the big shed. However since I took early retirement in 1994 the miles have racked up, and include earning bronze and ‘Best Old Bike’ awards in the Round Britain Rally.’ 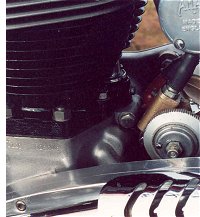 The seat has been deepened and lengthened by RK Leighton — ‘nice job’ — to cope with the effect of time on Neil’s physique; ‘I have de-svelted over the years!’ The original chopped monoblocs and remote bowl have been removed as Neil couldn’t get them to produce anything like satisfactory running. In their place the 650 wears a pair of monoblocs. The only other modification is a compression plate under the barrel to compensate for modern low octane fuels — cams, timing and such are all standard.

Flanged alloy rims went on 20 years ago and, more recently, stainless mudguards. The nuts and bolts are also stainless, and items not generally available in stainless have been home nickel-plated. The electrics are handled by a 12-volt electronic regulator conversion, and an electronic ignition may turn up one day ‘but it’s some way off yet as the magneto is so dependable.’ The brakes up been upgraded to a 2ls front drum. 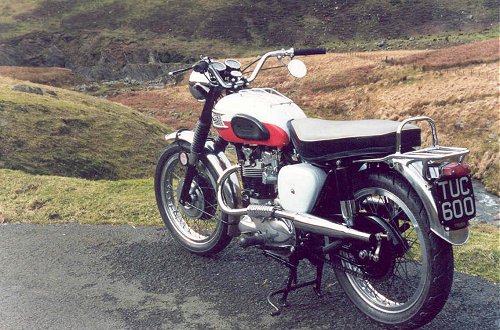 The alloy delta head was renovated by the Cylinder Head Shop over a decade ago, when the classic cracks between the central bolt holes and the valve seats were welded up and the bolt holes sleeved. Nucleus valves and leadfree seats were also fitted, and the total cost was over £300. ‘Money well spent’ Neil believes; ‘as a recent examination showed that everything is still in great nick. I would guess that this might be a cheaper option than going down the road of 9 or 10 stud head, barrel and later rocker box.’

‘The motor runs great on additive and pellet-free unleaded 95,’ says Neil, returning 63mpg at cruising speeds of 50 to 70mph which gives a tank range of 230 miles. 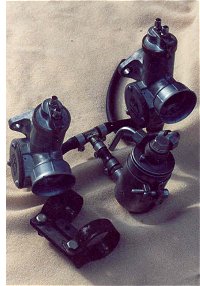 Neil’s more than happy with the 650’s reliability, saying that ‘it’ll go from service to service without attention apart from lube and tyre pressure checks.’ He’d also like to put to rest a couple of old chestnuts about this breed of bike:-

The first: that twin carbs need constant tuning. ‘Not so. Once new cables have stretched and settled down the carbs need very little attention when set-up properly.’

The second: that these early Triumph twins do not handle. ‘While not in the hands-off-the-bars Norton class, Triumphs are fine provided everything is as it should be. Taper roller bearings in the headstock are worthwhile, and special attention needs to be given to the swinging arm which is not the best-designed. The swinging arm must turn on the spindle — not the spindle in the frame — with all side float shimmed out.’

So does the 650 need much maintenance? Nothing untoward, reports Neil. ‘It’s straightforward to work on and make oil-tight. I grease the swinging arm every 1000 miles when I change the engine and primary chaincase oil, with the gearbox and forks getting the same treatment once a year. Straight 40 goes in the motor, 50 in the gearbox, and 20 in the chaincase and forks.’ 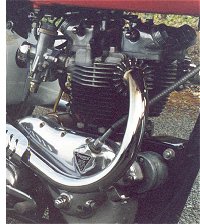 In all this time the 650 has only broken down the once, back in 1972. The clutch keyway sheared; ‘the only time it’s been left by the roadside; honest!’

The most obvious area where Neil’s 650 differs from the Bonnies of the late 50s is in its style. ‘I have always liked the look of the American East Coast Bonneville T120C and my Triumph is styled on this model. It looks nothing like the original 1959 version and never will — apart from the colour scheme of white and orange. Meriden got the look right from 1960-on. The 1959 Bonnie was hardly a pretty one; the seat was too small, whereas the 1961 T120C was just yummee-scrummy!’

So is it better than a ‘real’ Bonnie? That’s an impossible question to answer, but this 650 certainly suits its owner right down the ground. Just proves that all you need to make your own dream bike is a little time and an understanding of what you really want… 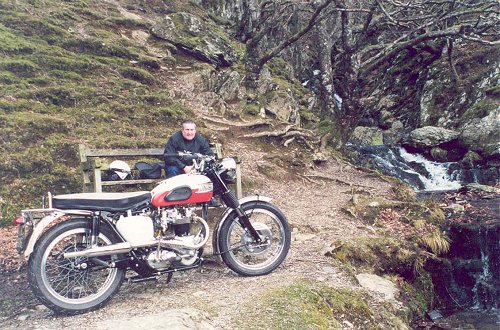