The debate hots up. Which is the Best Bonnie of all time? Jon Tait has some opinions, based around his three T120s

My dad bought this bike from a guy in Bedfordshire about 15 years ago. It’d been rebuilt but I remember, from riding it home for him, that it was a long way from having all of the bugs sorted! (can I just say Milton Keynes…?). My Dad fettled it, rode it for three or four years, then put it in the shed after reading an article on the damage a blocked sludge trap can do on a Triumph twin, as he didn’t have the time to check it out.

Fast forward another three or four years, and my Dad decided he wanted to sell it so as to buy something that worked (a novel concept!). I bought the by now unloved-looking twin, with the blessing of my heavily preggers partner. Phew!

As I was in the middle of a mega-rebuild of an old Police Electra-Glide that I’d started when I was about eight years old (or did it just feel like it?), the T120V found a new home in the corner of the garage, for another five year rest. That brings us to last autumn when, saints preserve us, the Harley was finally finished! (It won Best European/American at Stoneleigh in November, much to my surprise. It was a cattle show, but beggars can’t be choosers…). Not wishing to be without the joy of countless late nights in the workshop and the associated drain on my funds, I decided to tear into the T120V. 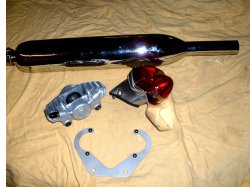 The plan initially was to ‘freshen up’ the cosmetics, strip and rebuild the engine, add a few carefully chosen goodies to get ‘the look’ and Robert’s your aunt’s husband – a bike combining the look of a late 1960s export Bonnie, with the brakes, gearbox and handling of the end of the line 650. Good plan, eh?

I do have a problem however — perfectionist tendencies, but without the skills to achieve those aims. Most frustrating. I’m probably about a quarter of the way through this bike, though with the engine and gearbox still to do. So taking into account my massive underestimation of the size of any task and my resulting glacial rate of progress, expect to see a riding report written around the end of the decade! 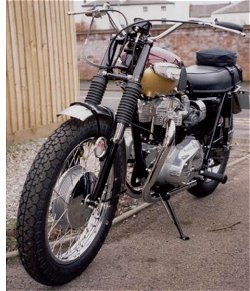 It’s the age-old story: boy lusts after rare and desirable model for years. Boy enters local vendor in search of gasket. Eyes alight upon the model of his dreams but he leaves knowing this lust must remain unrequited. Can’t get model out of his mind – checks piggy bank – not enough. Boy scrimps and saves, goes without all but his favourite motorcycle magazine. Three months later – bingo!

Takes partner to see model. She agrees with assessment of rare beauty. Boy decides that the gods are on his side, that he and the model are meant to be together. Boy does the deal – rides home at the start of winter – installs model in freshly decorated study, to be admired 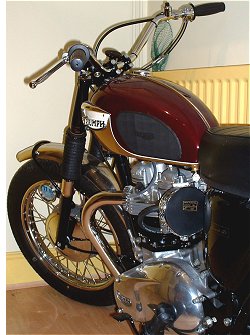 And the third Bonnie? The ugly, unloved sister (1971 T120R), banished to the shed for nearly 20 years. One day, she will rise again, as a beautiful butterfly breaks free from its cocoon…

Best Bonnie? What do you think?