There’s a very worrying trend within the classic bike world that, until a few years ago, I’d have struggled to give any credence to. To be frank (no, not FrankW, that would be stretching credulity well beyond its limits), I found it hard to believe that pot hunters existed and that there were such things as trailer queens.

For those worried about either or both of the above terms please let me explain. Pot hunters are folk who go from one show to the next with a classic bike or bikes with the express intent of winning another trophy, pot, rose bowl, gong, etc. Some of these pristine bikes thus displayed sport a valid tax disc and by default an MOT but many show-goers ask if the bikes are actually used at all?

There’s also a long running ground swell of public opinion that many of these bikes that don’t have road tax similarly don’t have functioning engines or transmissions. The allegation runs that they are incapable of moving under their own motive power and are transported from show to show in the back of a van or on a trailer, hence the name ‘trailer queen’. It would appear that the entire raison d’etre is to win their owner another tacky award and lodge this on a glass fronted cabinet of the same.

Each to their own etc. but what on earth is the point, please? Of course you spend your money and time as best suits you but why on earth go to such lengths and then not at least run the bike?

Many of us have turned into serial restorers, apparently seamlessly moving from one restoration to the next and it’s easy to start collecting machinery and thereby fill up your garage, shed or workshop without ever actually getting around to riding the bike(s) you’ve built. I know this because I’ve managed to do the same thing on occasion but at least the machines in question have all their giblets where they should be.

You only have to look in RC and read the escapades of the likes of Humbernut to see what can be achieved. Before someone pipes up and mentions the punitive costs of getting such items manufactured as one-offs, it’s worth remembering that our pot hunters rarely baulk of telling anyone who is willing to listen to them just how much they’ve spent of getting a new tank, tool boxes, girder forks, expansion chambers etc remanufactured. I rest my case m’lud.

The genus blingus stampedicus ridiculosa is perhaps fortuitously not limited to any one make, model, capacity and examples of their offerings can be seen at many events. 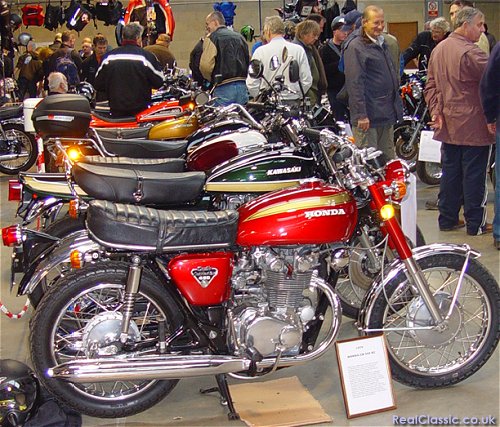 A recent VJMC club run emphatically countered accusations that our bikes are similarly pampered pets when some fifteen like-minded chumps met up at Newlands Corner at the start of autumn, rode to the Chalet cafÃ© and thence to the annual vehicle rally at Waldron, just outside Brighton. A range of smelly two-strokes was punctuated by the odd touring four, some big single cylinder trailies and a manically ridden MZ TS250 so never let it be said we’re not open-minded.

The day consumed twelve of the best hours I’ve spent on bikes for a long time, half a dozen gallons of fuel and less than a pint of 2T. My chosen steed (a 1967 Yamaha YR1 350) cruised the motorway part of the journey at 70mph and never missed a beat. Like all the other VJMC bikes on the run it looked a little dirtier at the end, had a few dead late summer insects stuck to it and acquired a few more microns of that all important patina that simply cannot be poured out of a can and rubbed on with a cloth.

Pot hunters and trailer queens? I think not. Bug-hunters and well-ridden: almost certainly.

Whatever you need to know about Japanese classic you know where we are.