A combination of modern materials and time-honoured techniques can cause problems when it comes to assembling the bottom end of a classic British bike. RC readers debate the how and the why of it…

In RC128, Ian Copcutt excellent article about rebuilding a Triumph triple showed how a micrometer is used to determine correct big end bolt stretch. This is the method that Meriden recommended way back then. But an acquaintance of mine, who is a well-known mechanic and engine restorer of repute, had a newly rebuilt Triumph engine blow up and was convinced it was not his fault. He explained to me that the customer was extremely irate and was threatening to take him to litigation. This mechanic assured me he had built many Triumph engines over the years. He’d never had a problem where the big end bolts had broken, due to the fact he used the bolt stretch method with a micrometer, just like Triumph recommended.

The conversation continued and he said to me that he suspected that the expensive and ‘special’ stainless steel big end bolts the customer had supplied for him to fit were faulty. It was then that the penny dropped – because stainless is extremely tough and will not stretch like normal big end bolt metal. Stainless is hard and will put up with extreme loads but then when it reaches its limit it will shear suddenly. This mechanic should have realised that you can’t ‘stretch tighten’ big end bolts unless you know what specification of metal you are dealing with! Not all stainless metal is the same specification, just as with other steels that pretend to be tough but sometimes aren’t. The correct metal specification for a particular application is a minefield. I did not have the heart to tell this mechanic that he was really to blame. Not every mechanic has heard of Young’s modulus of elasticity, unfortunately.

So I would stick to using a torque wrench when tightening bolts unless you can locate new old stock items and you are confident they are genuine.

I used both methods – torque wrench and stretch – as a cross check / calibration of my torque wrench. I would certainly agree with Dave’s conclusions on locating NOS bolts where possible. However changing the specification of the material is fraught with hazard. The Young’s Modulus may be different but the Izod impact test for shock loading would be an equally important factor. Although a material may have a greater tensile strength, it may not be as tough when it comes to shock loading. Big end bolts get a lot of shock loading – on every revolution it has to stop the piston at top dead centre and change its direction.

In an earlier life at a Ministry research establishment I did some ‘notch tests’ in a tensile loading rig. V notches (like those on the bottom of threads) can have a serious effect on a material’s ultimate tensile strength. The courts may have to decide but for my money the person changing material specifications has some share of the blame.

Dave has made a valuable contribution to the debate on new-old-stock versus pattern parts. Is it ‘caveat emptor’ or something like that?

Regarding the mechanic who seems to have slipped up with the use of stainless big end bolts in the rebuild of a Triumph engine: the failure of the bolts in service after tightening to the stretch method was probably, as Dave points out, due to the material properties of the stainless steel being somewhat different to those of the standard type as specified for the engine. All that stuff from college back in the day – Young’s modulus of elasticity, plastic deformation, yield point. Yes they all play a part.

In the early 1980s I worked at Leyland Motors (trucks and buses, not the dubious cars) in the Test Operations department and was tasked with carrying out a series of tests on bolts and fasteners of various types, materials, sizes, thread types and plated finishes. The purpose of the tests was to measure and graphically reproduce the results for elongation versus applied torque, together with measuring the clamp load at the joint using a strain gauged load cell. In other words to see how the theory worked in practise, and to determine suitable torque figures for use in workshop manuals.

The results were quite revealing. In essence the following rules and guidelines should be remembered when specifying and using threaded fasteners.

Firstly, it is not torque that matters as such; it is of course tension which keeps the joint tight. But we cannot measure tension with the use of normal tools, so for most purposes we still have to rely on torque through the use of a torque wrench. So how do we arrive at the correct value, or more to the point, where does the figure in the manual actually come from?

It depends on many factors, but the main things to consider are thread form angle, pitch, material plated finish and thread lubrication, which can all play a part.

A finer pitch thread form will produce a higher clamping load than a coarse one for the same applied torque. It’s because of the wedge principle acting between the threads, something which is seen in so many other things in engineering. Just like, say a brake pedal; a long foot-lever needs to move further but gives a higher force. Same with a fine thread, you have to turn it more to travel along the thread but it provides a high clamping force. The downside is that fine threads are not as strong compared to an equivalent sized coarse thread, so they can strip more easily. Hence coarse threads are used in soft materials such as aluminium alloy.

The plating on the fastener can also make quite a difference to the required torque value. Generally, the more slippery the surface finish, the lower the torque. So cadmium or nickel plated fasteners may have a lower torque value than that required for a plain fastener.

Service manuals often mention whether the fastener should be dry or oiled when assembling and torqueing up. If oiled, the torque value should be less than if dry. Always best to read the book first!

One other thing to remember is that the higher the grade of steel used in the bolt then the higher the tensile load can be before yield occurs, and hence a greater value of applied torque is possible. This usually applies to cylinder head fasteners, big ends, main bearings and so on. A Grade 12.9 hexagon cap screw will sustain a significantly higher torque setting than a standard Grade 8.8 bolt.

On modern production assembly lines, specialist machinery is used to tighten cylinder heads and crank bearing fasteners on the principle of torque versus angle and more importantly, how the rate of change of torque to angle changes as the fastener reaches the material yield point. The control system incorporates sensors to measure torque and angle during the tightening process and then compare the torque gradient of the bolt being tightened. By detecting the change in slope of this gradient the yield point can be pinpointed and the tightening process is then stopped.

Again at Leyland, we experimented with this technique and it became the normal method in production, as pioneered by a company called SPS. The method has its roots in a craftsman’s “sense of feel” on the spanners or socket bar which allows him to detect the yield point of the fastener with reasonable precision. This of course only comes with experience, and I am sure many of us have witnessed that heart stopping moment when the thread suddenly gives and the socket starts to turn just that bit too easily! If this happens it’s a case of out with the helicoil kit… 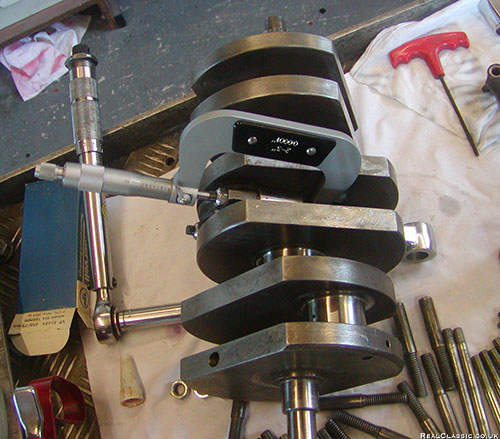