The annual Thundersprint event has moved to Anglesey and changed its name to Thunderfest, but it’s still a great event for classic road and race bikes. Here’s what went on this year…

As the sun beat down during two days of glorious weather at what is arguably Britain’s most beautiful race track, there was universal agreement amongst the huge Thunderfest entry: Anglesey 2015 was the best ever presentation of this classic motorcycle time trial.

Ian Jackson, who won Class B on Saturday of the two day event, summed up the feelings of all the Thunderfesters. “The Anglesey Circuit is one of the world’s great race tracks and I love riding here. The organisation has been perfect, the spectators have enjoyed seeing our bikes and the atmosphere has been so friendly. What more could we want?”

This year’s Thunderfest was part of the first Welsh Classic Motorcycle Festival, and spectators were very keen to see the Thunderfest classic race bikes being used hard. As Vincent Black Shadow owner Richard Kettle said: “These are race bikes and if they’re not raced they’re just pieces of dead metal. I’ve worn one of my exhaust pipes away grounding it out on fast corners – and that shows that the bike is alive – as it has been for the last forty-four years I have owned it.” 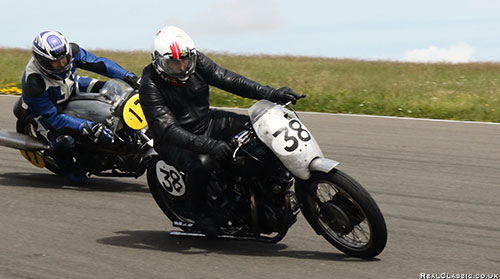 The idea of Thunderfest is that riders set their own target speeds and then try to achieve them during fifteen laps of the challenging Anglesey track. The best Thunderfesters are masters of smooth, accurate riding.

Len Sands won Class A on both days with astonishingly accurate riding in which he was just 0.37 mph away from his declared target speed. Ian Jackson was even closer to his target, giving a masterclass of smoothness and precise riding which resulted in being a mere 0.23mph from his declared speed.

In addition to the Thunderfest time trial, there were two Cavalcades and high speed track sessions from Classic Bike Track Days.

Cavalcader Julie Hough said: “I used to race but I’m not as young as I once was so it was great to be back on track, waving to spectators and having a great time – which is what Thunderfest is all about.”

Thunderfest organiser Frank Melling said: “It’s been a lovely weekend in every respect. The welcome we have had from Christopher Bibb and the Anglesey Circuit staff has been outstanding and Rob and Darin from Classic Bike Track Days have been great. We have had over two hours of track time and not a single accident, or incident. Best of all, during the whole two days, we have not seen an unhappy face in the Thunderfest paddock.”