So the caff-race Bonnie has a strange riding position, dodgy stoppers and is more than a little lethargic? BikerBabe reckons you shouldn’t believe everything you read in the papers…

If you’re of a certain generation, then the word Thruxton probably conjures up images of speed, adrenaline, excitement and of course, racing. Back in the late 60s, Triumph was having a rather successful showing in the Thruxton 500 mile endurance race and this, no doubt, led to the popularity of the cafÃ© racer style. Several decades on and even though people are still riding the original ‘hunch over the tank and give yourself sore wrists’ bikes, Triumph have decided to churn out some new ones that don’t break down.

Essentially a beefed-up Bonneville, the new Thruxton 900 has all the seductive looks needed to reel me in. To start with, it’s purely aesthetic – sleek lines, glossy finish and lots of shiny bits catching the sun. And there it was, sitting outside Shirlaws in Aberdeen, waiting to introduce me to the world of new old bikes. After a quick chat with Donald and signing the necessary paperwork we went outside and he took me through the basics.

‘You need a wee bit of choke to start her up from cold, these bikes run so lean nowadays. There’s no light switch as your lights are always on, and it’s the normal one down and four up.’ Right, got that.

Hopping on a strange bike, it’s a good idea to locate indicators and such like, and everything was easy to operate with gloved hands. I had anticipated that this being a retro style machine, I’d be able to reach the ground, but not so. I don’t know if Donald and colleagues were watching as I clambered on, but if they were, I suspect one or two hearts fluttered as I employed a rather ungainly method of heaving it up off the sidestand. Flick the stand up, pull the clutch in a couple of times to gauge the feel of it, blip the throttle and snick it into first, and away we go.

Take up on the clutch was light, and only the smallest twist of the right hand was required to pull away smoothly. Moving around on the slightly less-than-comfy seat, which was tapered towards the front, I found it easier to touch down, and as I negotiated junctions to make my way out of town, it all became quite easy and natural. The stretch to those lop-eared bars felt about half a mile at first, and to reach them felt a little akin to laying flat on the tank straining most every sinew in my arms. Catching a glimpse of myself in a shop window (I hate shopping, but the plate glass windows are handy for the fashion conscious dude) I was pleased to see it actually looked quite normal! 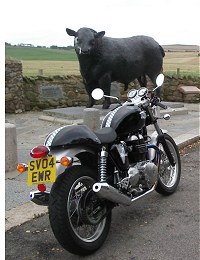 With a ‘dollop of extra capacity’, as Triumph so eloquently put it, the 865cc engine made it a synch to squirt through the queues of tin boxes, although I found it temptingly easy to ignore the speedo with such responsive acceleration.

Out of town was far more fun, with plenty of open roads to test out the combination of hot cams, new twin carbs, revised steering geometry and of course, at the other end of business, the 320mm floating front disc, and the not quite so large rear brake.

In this part of the world, we are lucky to have many miles of well surfaced carriageway, much of which is free from the boys in blue.

Not that this was a consideration in my decision of where to spend a couple of hours playing around with my new toy, but just a lucky coincidence that meant I could put it through its paces – with the sole purpose of reporting back to potential buyers of course. Even if there had been an inquisitive plod around, the vibe-free mirrors – a real treat – meant he would have shown up on the radar.

I read recently in one of the sports bike orientated publications that the Thruxton had a strange riding position. Not wrong apparently, just strange, and according to the ex-racer who tested it, it was a little lethargic and lacked responsive stoppers. I suppose everything is relevant, and if you’re used to hurtling round in circles at breakneck speed on machines that would throw you off as soon as look at you, then maybe those comments are justified.

About 20 minutes into my ride, I had so much confidence in the stop and go abilities of this shiny bike that I was scything through corners without a care in the world. Glancing at the speedo I was pleased to see that being on a bike like this adds another 10 or 15mph to my usual cornering speed. I’m not saying that to boast of my own skills, merely to let you know that this is a machine that you can trust to hold its line, even if you fling it around a bit, although I suspect the Metzler tyres helped a little.

Pulling into a layby for a breather (and to check the fuel level in the good old fashioned way) I stood back to suss it all out. Rear sets, polished engine covers, short front mud guard, adjustable suspension, the typically racey black and white chequered stripe over the tank and racing seat hump, aluminium wheels, nice clear clocks, and not too much fuss in the cockpit; the attention to detail is par excellence. The side stand could have caused a problem though. It tucks up neatly out of the way, and to operate it, a firm push outwards (rather than downwards) is required. It’s maybe not something you’d consider practising before you return to the dealer’s showroom, but based on my experience I’d strongly recommend it! 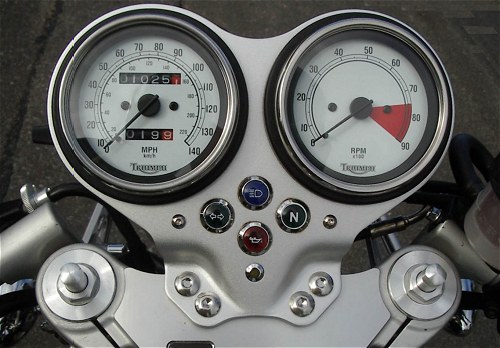 I’ve covered most of the good points, so it’s only fair you should know about the not so good ones. When is a bike not a bike? When it conforms to all the stupid noise emission laws, that’s when. To make the purring Thruxton sound like a proper classic bike, Donald told me that it’s easy to get hold of some aftermarket pipes to replace the standard ‘megaphones’, and they’ll only set you back a couple or three hundred quid. Well worth it to complete the package. At one point, we were cruising along, and I gradually became aware of some vibes coming through the bars and seat. Strange, thought I, it didn’t do this back there, but due to the lack of noise I hadn’t noticed I was still in fourth, and flicking it up to top cured it instantly.

The hard seat and eventual ache across the shoulders are only to be expected on a bike such as this, although the positioning of the footrests was perfect for pain-free knees. Not having a petrol gauge, I had no idea how much was left in the 16-litre tank, so thought it wise to end our session and head to town. There was no fuss from the box when slipping down through the gears at the lights, and roundabouts were executed with ease. So much so, that when Mrs People-Carrier got herself in the left hand lane, then decided to go straight across (obviously my fault for being in the correct lane), I was able to turn on the power and scoot out of her way. 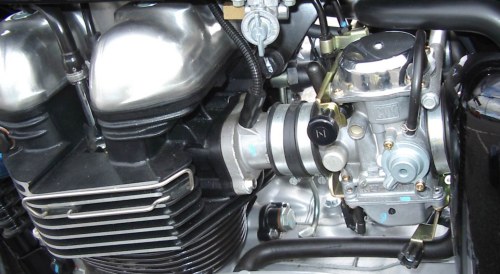 Essentially, the £5995 Thruxton is more of a poser’s bike than a comfy all-rounder, and having got the hang of touching terra firma (always good if you’re going to pose), the attention, mainly from youngsters, was rewarded with the freeing up of a few of those 96 horses.

One scene that will stick with me for a while was when, at the last set of lights, a lorry driver leaned out of his cab.

‘How fast does that thing go?’

A quick glance up, a cheeky wink, lights changed, then whoosh! A dark visor is a must, as the grin factor is 11 out of 10. 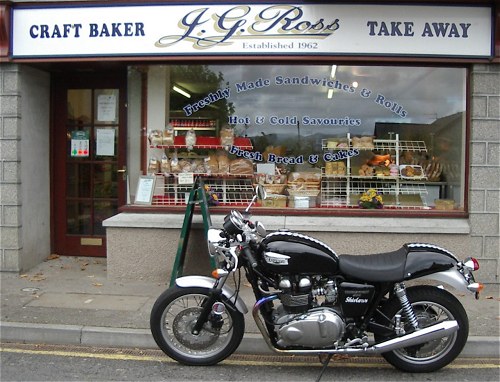 My thanks must go to the staff at Shirlaws, in Aberdeen – especially Donald who always believed I would return safely with his bike in one piece!