Classic bikes can create all sorts of problems, especially the more unusual models. Phil Speakman has been puzzling over how to extract a seized crank on his Adler Favorit…

When you’re rebuilding a classic bike there’s a certain amount of procrastination involved. Although maybe ‘procrastination’ isn’t really the right word now I think about it. It is more an appreciation of knowing when to stop and think and maybe take advice or just ponder for a while. One thing that bike rebuilding has taught me is that I can’t approach every mechanical problem that I encounter like a bull in a china shop and expect to have it resolved to satisfaction within that initial spannering session.

Take for example, the issue of the seized crankshaft in my 1958 registered Adler Favorit. It was bought as a runner (albeit rough), tinkered with for an afternoon (running better), taken for a test ride prior to an MOT and subsequently seized as it cooled again whilst I fetched the paperwork.

During the summer, I started to strip down the engine for the crank overhaul. By now I had acquired the correct tools for armature removal (bolt with one thread removed), clutch removal (centre puller that I found in a load of bits and bobs that came with two subsequent Adler purchases), and primary gear (Machine Mart puller). Yet once I had all the gubbins out of the way, the most difficult job still lay ahead of me: getting the two-piece crankshaft out of the one-piece crankcase without damaging the crank or the two cast aluminium main bearing housings.

The Adler twin cylinder motor is a lovely unit, exquisitely engineered, but it certainly isn’t designed for the home bodger mechanic. It is only now that I’ve done a couple of engine rebuilds that I feel confident to even take on an Adler twin rebuild and feel that I’m not going to butcher it beyond mechanical reclamation. 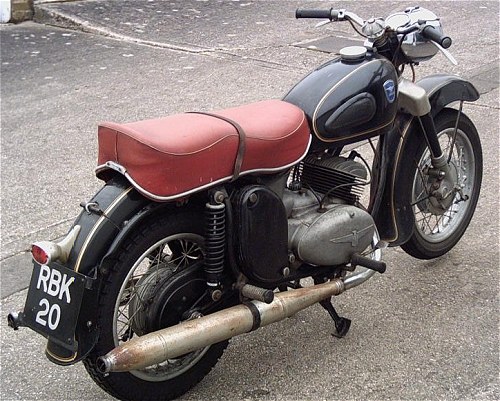 The Favorit is a 250cc twin that was designed as a replacement for the much acclaimed, plunger framed MB250. Released in 1956, the new swinging arm model kicked out 16bhp at 5600rpm giving it a top speed of 73mph, slightly slower than the top of the range, 79mph 18bhp Sprinter model (yes I’m afraid I’ve got one of those too).

The recession in the German motorcycle industry in the late fifties killed off this promising newcomer and only 600 swinging arm models (Favorit, Sprinter, Six Days Enduro and Moto-crosser) were built before Grundig bought out Adler and reassigned them to typewriter production in 1957. The German owners’ club reckon they know of approximately 50 or so Favorits and a similar number of Sprinters that have survived, so sourcing replacement parts isn’t going to be the easiest of tasks. Though in fairness, the engine is pretty much the same as the MB250. 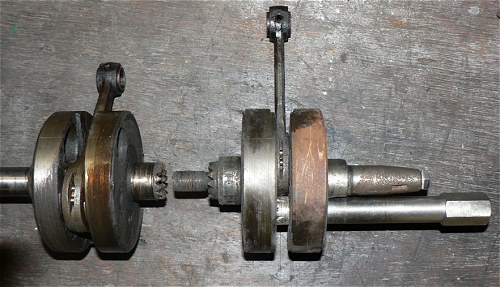 The left and right Adler crank shafts are joined together in the centre by a Hirth coupling which requires the use of a specific Adler tool to undo and subsequently reassemble. Without it, well you are stuffed. The tool engages with the cog-like head of the central captive bolt held within the crank webs. Once engaged, the tool can be turned anti-clockwise to undo the left-handed threaded bolt that draws the two cranks together. Once completely separated, both cranks can be removed from their respective side of the cases.

However, I appeared to have fast forwarded right through the most dangerous part. Namely, removal of the left and right main bearing housings. These parts are cast aluminium, brittle as a rich tea biscuit and very easy to damage. I know, I have damaged one myself, but luckily I had a replacement. 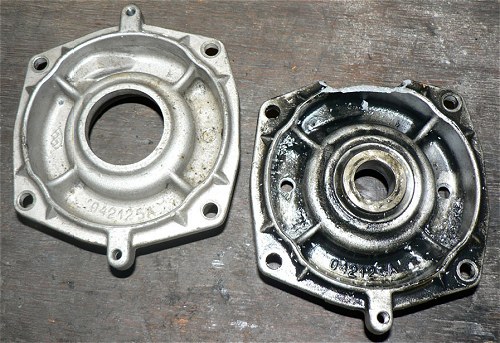 The trick is to be able to pull the bearing housings from their deep seat in the cases in a clean, straight controlled extraction. Without the correct tool, well… let’s just say you’ll always find yourself on the back foot. Should you crack one of these housing then you’ll be needing the assistance of a skilled TIG welder to repair the housing so it is capable of forming gas tight seal again. This is such a common problem in Germany that parts supplier Motorrad Stemler actually offer a welding repair service to their customers, but strangely they have not had any re-manufactured. I’ve got the germ of an idea for a puller design in my head and I might just try knocking one up over the next couple of weeks.

‘So’, you might think. ‘We’ve got the bearing housings off, just wallop the Hirth tool in the hole, give it a few turns and let’s get the cranks out.’ 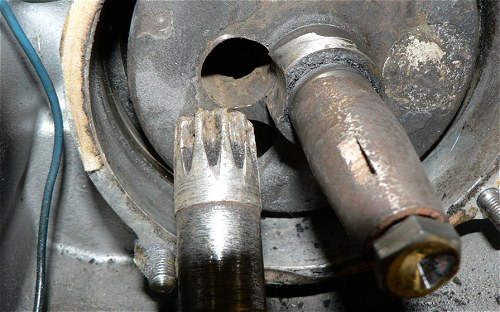 No, it’s not as simple as that. You seen the inner bearing race from the offside main bearing remains firmly on the crankshaft, blocking the hole that the Hirth tool is supposed to insert into. You can’t get the cranks out to get your best bearing pullers on the race because that race is stopping the job, and that just about takes us back to the beginning of the story.

The cause of the original seizure? The centre bearing looks pretty well gummed up solid with dirt and carbon. So maybe the piston clearances and rings also need looking at… 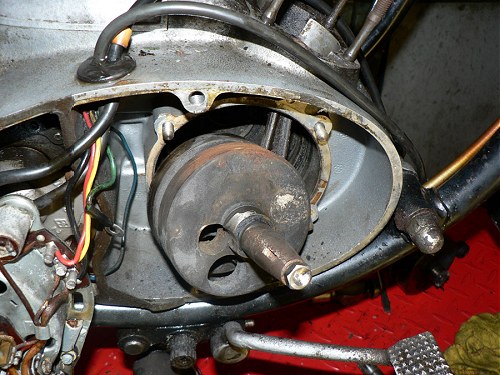