‘Complete 1957 Thunderbird but in pieces’ read the advert. Roy Stockham wouldn’t usually reply to adverts that don’t give a price but the phone number indicated that the bike was only 20 miles away…

A call revealed that the ex-sidecar machine was indeed complete. The seller had bought it some eight years before, had started restoration but had not go very far with it. In fact the only work done was for the original rims to be rechromed and (wrongly) the rim centres were etched and painted black. But all the important parts were present (and possibly correct) and so the bike was bought on the spot for £600.

Restoration was very straightforward and cost £1300. Happily, the tinware had no dents whatsoever. The original gold paint which lurked on the underside of the mudguards was used by a local paint firm to mix a batch of ICI Permobel synthetic paint. ICI Transport polyurethane paint was used for the black parts and Roy got busy with the spray gun to do the work. The engine had new valves, guides, piston rings and main bearings but all other parts were reuseable. The rest of the machine was restored as it required and all the work was done and dusted within six months. If only every rebuild could be accomplished that quick — most RealClassic refurbishments seem to take about six years!

The wheels were rebuilt using stainless steel spokes by local wheelbuilder Dick Waldron (01908 501313), while most of the replacement engine and cycle parts were obtained from Mark Francis and Rare Spares.

Before this TBird hit the road, the only one Roy had previously ridden was in 1952, when he was still on L-plates. That was a brief spin on a friend’s bike, and Roy was very impressed at the time by its easy handling and docile manners. 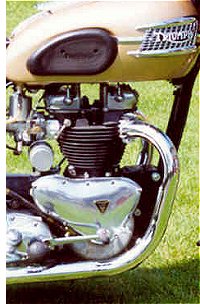 In the eight years immediately after restoration, Roy’s own T-Bird covered some 9500 miles and proved to be a pleasant, unfussy, reliable bike which is easily able to hold its own in present day traffic. The only changes to the original spec have been a Boyer Bransden electronic ignition (to make it go better) and a 2ls front brake (to make it stop better!). The Boyer — fitted in the distributor — was supplied by Kirby Rowbotham for a cost of £188. The brake came from an autojumble where it cost £15, but with shoes and such the total price was nearer £80. The TBird was also treated to a new standard bore cylinder block, and old-stock pistons were fitted after 6000 or so miles. With modern rubber applied to the wheels, Roy reckons there’s little else to be done which could improve the ‘Bird further.

‘All in all it’s a very pleasing machine,’ says Roy; ‘It has good starting, adequate performance, comfort, reliability and good roadholding, all with no real niggles.’