How do you turn a bland UJM into a genuine Japanese classic? You add style, of course. Rowena Hoseason has a thing about pop-up headlights…

An interesting phenomenon was observed at the recent Japanese Classic Motorcycle Show at Donington: there was an extremely clean Suzuki 1100 Katana offered for sale at sensible money. It wasn’t lined up in the concours display but was parked alongside a trade stand. You could see it from the cafe (where I was perched, naturally), and you could see everyone else walking past it… slowing down… turning heads… clocking the ‘get your grubby paws off my lovely bike’ notice… walking on – then seeing the final ‘for sale’ line on the sign, and skidding to a halt. A real, live genuine head-turner.

So it should be. Stunning to look at; rewarding to ride, and as mechanically robust as a pair of old boots. Hefty, clumpy old boots. The sort you’d wear to run up a mountain. I spent far too many years riding high-mileage, harassed, air-cooled Suzuki four-cylinder bikes to view most of them as anything other than trucks – but while my GS550 Katana and GS650M were workaday workhorses, the 1100 and 1000 Katanas were so much more. Yet the big bikes share the indestructible attributes of the middleweights. And they look good. No… they look amazing. 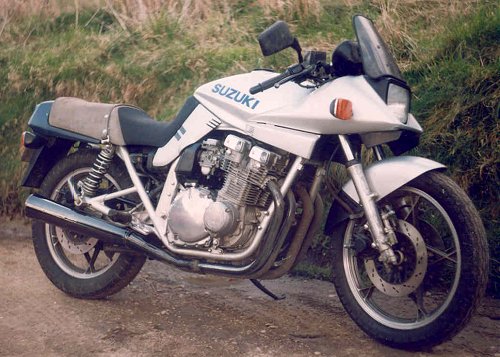 Fellstrom and Huth of Target Design in Germany did their styling work well; the GSX1100 looked nothing like the usual UJM. Visually years ahead of its time, the Katana inspired love or hate in the eye of each beholder. Sadly, not enough of those who loved the idea were prepared to make it a reality in their garages, and the original 1100 was only in production for a couple of years after its 1981 launch. The GSX1000SZ/SD versions were an homologation edition of the same era designed to get the Kat racing, with 108bhp from the 997cc motor – but the one you are most likely to trip over these days will be a 111bhp, 1074cc model. Just imagine it; all silver and sharp and sleek – a basking shark with a big teethy grin. The silver frame and black chrome exhausts add to the effect which even the sort-of-suede seat can’t spoil. One of the world’s most beautiful motorcycles. Sue me if it ain’t so.

The Katana was by no means all smart suit and no substance; far from it. Underneath the radical looks there lurked a very fine motorcycle, directly developed from worthy generations of the GS model. In fact the GSX1100S was no more than a lightly tweaked and tarted GSX1100E, with all the rumbling reliability this implies. The 1074cc engine remained largely unchanged; an extra 11 brake-horses were coaxed into action by peripheral means — altering the exhaust timing, rejetting the carbs, drilling gurt-big holes in the airbox — and a neat job of gas-flowing (twin-swirl combustion, indeed!) and a weight-saving alternator rotor improved throttle response to create a great leap forward without, erm, actually taking any great leaps forward.

Likewise, the Katana’s double cradle frame, complete with extruded aluminium box-section swinging arm, was very similar to that of the GSX-E, the only big difference being the exposed subframe that held the rearsets. Where the plot differs greatly is at the pointy end, however; here Suzuki tried to keep both the Katana and its cost under control. The former they achieved by increasing rake from 28 to 29 degrees, thus improving straight-line stability (at the expense of rapid reactions in the turn), and the latter by taking away most of the twiddly bits on the forks that cost so much to include. Hence the Katana — the sporty model — had less adjustable suspension than its immediate predecessor, only retaining preload adjustment up front. Shame. Still, it did come with anti-dive… 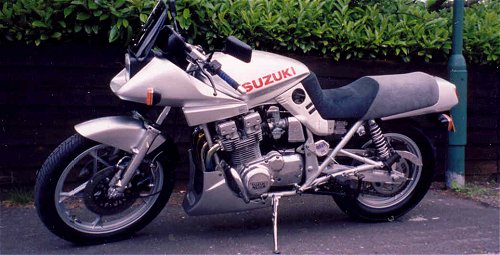 And there’s another story. If anti-dive had been given another name — nowadays it would have to be an acronym like Suzuki’s Own Dive Sphincter — it might not have been greeted with the derision I remember from the time, and may even have stuck around long enough to develop into a useful attribute. Y’see, the intention was never to eliminate fork compression entirely (which would actually be a pretty poor idea, now one considers it seriously) but to give the rider more control over it. On the GSX range this was achieved by restricting the flow of damping oil, thus slowing fork compression, as the front brake was applied. The more vigorous the use of the lever, the less able the forks were to compress. This in turn should’ve kept the rear wheel under load for longer, allowing for more braking pressure to be shunted through it. What a blinding idea, eh? Shame no one quite got the hang of it back then…

To the buying public, these details were all but irrelevant however. Most folk were after an exotic superbike that was within financial reach. Suzuki priced their burnished blade at an accessible £2850, and careful shoppers in the early Eighties would’ve picked one up at the knock-down rate of £2500 (oddly, a fair example will set you back a similar amount today. Karmic, or what?).

What Suzuki couldn’t counter was the initial distrust their radical machine inspired; was it after all no more than, as Bike magazine described; `just a pretty face on another overweight multi’? 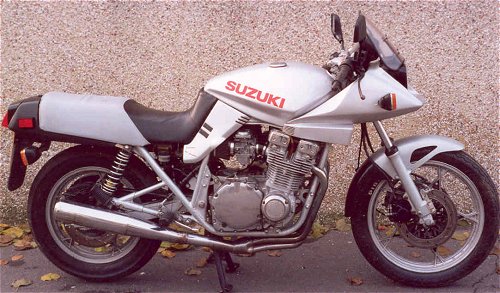 Testing this theory, I rode a 40,000-mile example a couple of years ago. The bike first appeared to be physically smaller than I’d thought, until I settled into the recessed saddle. Then the distance from seat to bars seemed immense. It was a long reach to the (not very) adjustable clip-ons at full stretch, with my weight thrown forward, my legs tucked up and my head tucked in. The motor fired up with a typical GS grumble, all 16 valves snickering, anxious to be off. We snouted forward cautiously and, as my weight settled onto my wrists, I doubted Dave Minton’s opinion that; ‘the styling is brilliantly functional’. My neck and shoulders fought the riding position and my legs were cramped straight away as the cold engine snatched between surge and stall. Er, Dave..?

We pulled away in ungainly fashion. The 30-inch seat height let my feet touch down with room to spare, but the restricted lock — ten degrees less than the standard Suzi — meant I needed all the help I could get to keep the heavy (550lb) old lorry on the straight and narrow.

Similarly, the 34mm CV Mikunis, which would provide exactly the right response at about six grand in third, were doing nothing whatsoever toward low speed maneuvering at 500rpm in first. We shuffled and stuttered for a few hundred yards until the motor warmed enough to run cleanly and there was clear road ahead. Finally, the Kat was out of the bag.

‘This is a man’s bike, you can’t ride it half-heartedly’ said Bike at the time, and they were half-right, anyway. Under 30mph the Katana made little positive impression; like a Hinckley Triumph I could feel all of its weight up top, and the rear suspension proved to be way too firm for my comfort. It was still wearing the original twin shocks which felt like the next best thing to a hardtail some fifteen years earlier, and they hadn’t softened very much with age. Every bump and bounce was transmitted straight through the thinly-padded cutaway seat to my tailbone — thank Heavens I carry my own personal posterior protection! 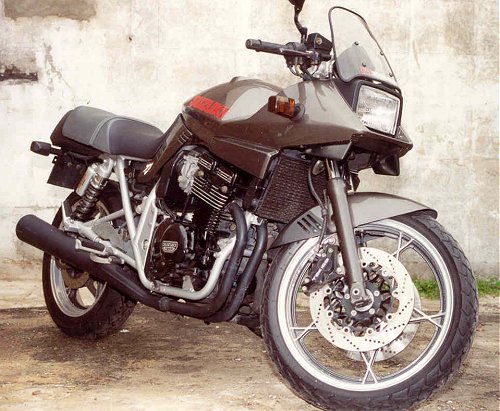 Once the Kat could stretch its wheels the picture changed. It was only as we reached legal speed limits that the advantages of the long, stable chassis and the compact riding position made themselves obvious. It was unshakable and I was unshaken. The Katana was one sneakily seductive Suzuki — the faster we rode, the easier it got. The opposing speedo and tacho needles spun around (a fine piece of design; I could watch those clocks all day), the engine settled to a meaty rumble and the miles blurred behind us in the mirrors.

There was heaps of torque on offer — about 71lb/ft — so we stayed in fifth for most of the time, letting the lazy great lump roll on and out of the bends. There was no twitching or wallowing; this was no fidgety lightweight nor lumbering tourer and it never pretended to be. At full bore a Katana can still slice through a standing quarter in a little over 11 seconds, pushing on for 145mph. You do need to mind the bends a bit when you give the throttle that much action, however; 1980s motorcycles can feel a touch unresponsive in comparison to today’s slick tricksters. The clutch and throttle action can be stiff, the expression ‘wooden’ was invented for the brakes, and no Katana will change direction in lightning fast style. A well fettled Brit twin will bendswing right by on a curving B-road, but a classic Kat will blast past on the straight – and the Suzuki will still achieve 100% of its original maximum velocity!

For most of my ride, however, the Kat was content to purr along at 80, eating up the open road, simultaneously relaxing and engaging the rider. A bike with a wheelbase this long won’t be steered hurriedly, but once committed to the line it held steady. The great surge of torque at 6500rpm hurled the GSX out of each corner, the three 11-inch discs hauled it all back in again before the next – with the feel marginally improved by Goodridge hoses. In the 80s, the Katana performed admirably against the jury of its peers, and a determined rider can still encourage a Kat to tramp on today. An ‘overweight multi’? Not really; not unless you were feeling very unkind. 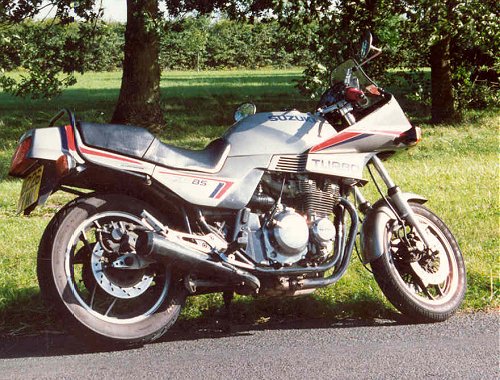 It would be nice to think that if Suzuki had stuck to their guns and kept the Katana in production in its original guise then perhaps it would have been accepted by the mass market. Instead, the design was distilled and diluted and corrupted and co-opted for the smaller models, and the 550 and 650 Kats really don’t deserve the name. The GSX750S, which came out originally in 1984, was a more stylish tribute with its square-section tubed chassis, monoshock suspension, gold highlights and pearl white paintwork. It had a pop-up headlight too, which means that one day I really will have to own one. But for Katana purists the 750 (and the 1990’s GSX-R-based 400) were a step too far away from the original concept.

I once wrote a piece about a different 1100 Kat which I’d considered buying – a very sorry example, that bike. It showed every sign of having lived a hard life. Its brakes were worn and warped, its clutch slipped and dragged, and just about every chassis bearing needed replacement. It didn’t need renovating or rebuilding: it needed putting out of its owner’s misery. I said how horrible it was and narrowly escaped with my life, after outraged classic Katana owners caught up with me.

You don’t see many Kats like that ratbag these days. Suitably maintained, the GSX can be utterly reliable and that ‘bulletproof’ reputation is genuinely well earned. It’s a refined package, which was developed far enough to be a ferocious, fun and functional motorcycle for the British roads of today. Unlike its modern-day sporting counterparts however, no one could rightfully accuse the Katana of being bland or characterless. Its growling, grumbling, wrist-aching performance has etched this bike’s personality into memory and the history books. 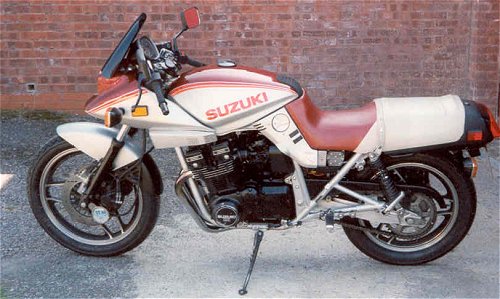