Over in Brazil, Chico Rasia has been making progress with his 1980’s Honda twin. Just a few things to fix… oh, and then a few more…

Part II left off with a stalled bike getting pushed back into the garage. Actually, it would stall everytime I’d let it idle, and was running roughly – seemed like the left side cylinder wasn’t firing. I broke out the workshop manual and started looking for a culprit: clogged carburator, defective CDI unit, contaminated fuel… Since this bike hadn’t run for quite a while, I figured out some filth from the petrol tank had got into the carburettors. Off came the seat, side panels and tank. Just as a precaution, I tested the CDI unit using a multimeter – alles Klar. Getting the carbs off wasn’t too easy, but eventually I got them out.

It quickly became aparent just how much abuse and carelessness this bike had endured in all these years! Unmatching and missing bolts (the air filter cover is held on with three bolts, needing a flat screwdriver, a Phillips screwdriver, and a hex spanner!), broken drain plugs, and so on. There’s only one throttle cable (there should be two), and the choke cable is attached to the carbs by means of a bundle of copper wire!

I took the carbs apart to find some very badly clogged jets (you guessed it: the left carb pilot jet was completely clogged), and did my best to get it all cleaned and reset them. After a bit of a struggle (what classic doesn’t enjoy giving its owner a run for his money?) I manage to reinstall the carbs.

Maybe it was the Christmas Spirit, maybe Santa’s helpers tinkered with the carbs overnight, but when I tried to bump start it — surprise! It started on the first try!

Oh joy! Now I have a bike that stops and runs: time to go for a spin…

As the engine heats up, I find it idling very high, at 3000rpm. Stop it, readjust the acceleration screw, bring it down to some 1600rpm (the manual says it should be set to idle at 1200 ± 100rpm, but I have this feeling that will be too low and the engine will stall). 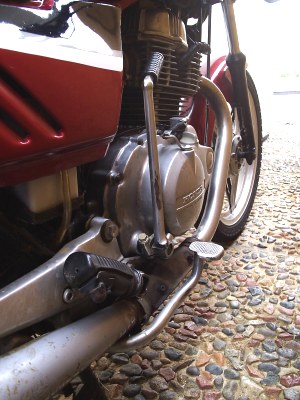 I spent the next few weeks mainly riding around the neighbourhood, and doing an occasional errand downtown. I was surprised to see just how quickly I adapted to real riding conditions. As for the bike, now I can give a better assessment: it’s a very mild mannered, easy to handle bike, despite its 400lbs. It is quite challenged in the braking department (this is the earlier version, with single disc on the front and drum at the rear; in 1984 Honda upgraded the CB to twin discs at the front and eventually gave it rear disc brakes as well).

The engine has plenty of torque, making it quite nimble. The Honda engine has counterweights attached to the crankshaft which, coupled to the parallel twin design, greatly reduces vibration. She is certainly no racer, being most happy on the 50-60mph range. Its size and presence give me – a novice rider – confidence to ride in rush hour traffic amidst busses and SUVs!

Time for a few improvements. At a local parts shop I get new silencers and equalization chamber, new throttle, choke and clutch cables, a pair of blinkers, new brake master cylinder piston (I was still using the ridiculous ‘universal’ cylinder), plus a few odds and ends, all adding up to about £60 (believe it or not). Christmas comes but once a year, you said? 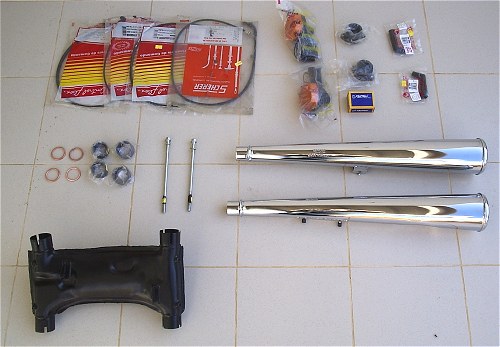 Oh boy, has anyone NOT ever felt anxious, waiting for the weekend to come just to get a chance to work on one’s pride an joy? Well, this is my turn! Actually, I can’t really wait until Saturday, and though this is still just Friday evening, I decide to at least repair the brake cylinder.

If you’re following this story, you’ll probably remember that my first attempt to repair the cylinder was ill-fated: I had got the wrong piston; carefully looking through the parts manuals, I discovered that, at some time in the past, the controls on my CB400 were changed to CB450’s controls (my guess is that the bike was crashed and the previous owner decided to, well, ‘update’ the bike. Sort of.)

So, now I got the ‘right’ repair kit, and it should be a breeze to replace the piston, right? Disassembling the master cylinder was quite easy (I guess I should patent my technique for using a bent pushpin for removing a circlip), I clean it all up again, and attempt to install the new piston. To my surprise – not! – the new piston is a bit too big to fit in the cylinder!

So I suddenly find myself carefully shaving off shards of rubber from the piston seal. Eventually, by means of a sharp razor, brute force and a few words of encouragement (ahem!) I get the new piston in. Actually, it was a bit nerve-wracking: shave off just enough rubber to get the piston in, but not too much, causing the piston to lose its tightness (which is why this whole deal started… see part II). All in all, I was quite proud of my achievement. This calls for a quick ride around the neighbourhood!

Saturday morning: like a kid on Christmas morning, I jump right out of my bed and race to start working on the bike… only to find that the master cylinder is still leaking! Luckily it is not the piston: the fluid is coming from between the reservoir and the cylinder casing. A generous amount of engine joint adhesive takes care of that. Changing throttle cables, however, is a whole other story.

One thing I’ve learned (the hard way) is that if something apparently as simple as a throttle cable is jury-rigged / missing / held in place by means of adhesive, it is so because of a broken / stripped / incorrect / unmatching something else. One of the bolts on the throttle control assembly has a broken head therefore the previous owner could not get it open in order to install the cables.

Usually a broken bolt would stop me in my tracks and I would give up and go back home watch some TV. But not today. Using a 5mm drill bit, I easily drill out the broken bolt (hurray!). Finding a replacement bolt on a Saturday afternoon, however, was not as easy as drilling out the old one. Five shops later, I manage to find some stainless bolts that fit. The rumours that stainless steel will react to aluminium causing some strange electrolytic corrosion are true, as I discover a few months later.

Time to move on to the exhaust. As I remove the old silencers, I discover a very, well, peculiar pair of mounting brackets. Seems like a previous owner decided to make a left side bracket from a right side bracket. It surely is amazing the trouble people will go through in order NOT to buy the correct parts!

Getting the exhaust back on was a very, very hard job. Made even harder by the fact that the new balance chamber simply does not fit! Silencers to downpipes, downpipes to silencers, beginning from the balance chamber… No matter what order I try to assemble the pipes, I simply can’t get the damn thing to fit!

It Is late afternoon, I’m tired, frustrated, the bike is half assembled, and I’m really inclined to set the whole thing on fire. I suppose it’s better to just go back home and start again fresh the next morning.

On the next instalment: how to make one working speedometer from two broken ones…