Your definition of a ‘classic bike’ may well depend on where you live. Chico Rasia, from Curitiba in Brazil, dreams of a 1980’s Honda twin…

Wait a moment. Haven’t I skipped something here – something like ‘How come this Brazilian 26 year-old guy who has just got his license and has never ever ridden a bike out on the streets is so certain that he wants a 400cc Japanese bike which is nearly as old as himself’?

Indulge me, if you will.

The Brazilian bike market is somewhat idiosyncratic, with reasons leading back to the military dictatorship that ruled the country from 1964 until 1985. At some point in the 1970s it was decided that, in order to stimulate technological development and safeguard our industry, importing of any and all goods was to be forbidden (ah! The geniuses… who needs competition anyway?).

Only a handful of car and bike manufacturers were here: VW, Ford, Chevrolet (I guess that’s Opel elsewhere?), Fiat, Honda, Yamaha. Mercedes-Benz and Volvo were also present, but they made strictly trucks and buses. Ever wondered why we were still driving Volkswagens in the late 1980s?

Honda started assembling the CB400 in Brazil in 1980, and it became the largest Brazilian-made bike (short of the Amazonas, a VW 1600cc engine powered behemoth). In order to dodge the ban on imports, Honda chose to assemble bikes in Manaus (that’s right, smack in the middle of the Amazon rainforest), from domestic and foreign parts. It was such a great success (in a market used to seeing only 180cc and 125cc bikes) that Honda couldn’t keep up with the demand. Retailers were overpricing new bikes.

Up until 1983, the engine (400cc OHC parallel twin) which powered these bikes was imported from Japan. The legendary Japanese engine was then replaced by a Brazilian-produced 450cc engine on the CB450, launched on 1984.

Back to economics and politics. In 1985, after several years of social unrest, demonstrations and rallies, the military finally agreed to let us civilians once again have the reins of our country. The indirectly elected president Sarney went on to tackle the massive inflation problem. Ãœbermassive, it would seem – inflation figures for the period were over 100% a month.

But the solution was quite simple: the government would publish a monthly price table that dictated the values of everything, from apples to eggs to milk to motorcycles. And anyone who was found charging more than the government-established price would go to jail. Oh yes, the beauty of simple solutions.

In order to dodge the price table, car and motorcycle manufacturers would release new models every year, the logic being that, since this is a ‘completely new model’ (despite the only difference being the colour of the mudguard…), it must have a completely new price. So Brazilians got to know the CB450DX, with triple disc brakes, the CB450 Luxury Sport. There was even a CB450 Nelson Piquet, in honour of the famous F1 driver. The CB450 remained in production until 1994. 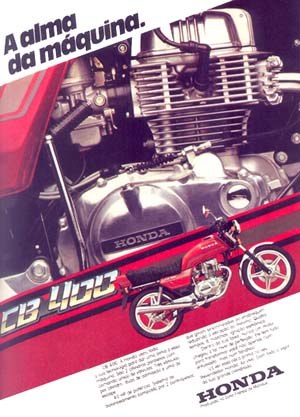 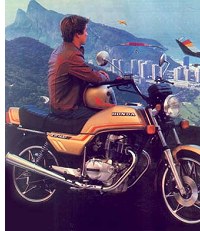 Come 1989, we enjoyed our first democratic election in a quarter century. After a much controversial campaign, Fernando Collor was elected president of Brazil, only to be impeached two years later amidst a huge political scandal. In 1990, he decided to open Brazil’s harbours once again. It was like waking up from a 20 year slumber… At 11 years old, I finally got to know marshmallow!

So now we can buy Kawasakis, Harleys, Ducatis, Guzzis, maybe even a Triumph. We can also buy obscure marques such as Hyosung, Daelim and Kasinski. Why have I chosen a Honda?

As I said, the Brazilian market is idiosyncratic. It’s over-run by small displacement motorcycles – namely the Honda CG125 and its bigger brother, the 150. They are used by everyone: couriers (which we call ‘motoboys’), commuters, workers. They are the bread and butter, the really popular, affordable means of transportation for the everyday user. They are cheap to buy (£1150, about a quarter the price of a new car) and to run. And they’re everywhere… I reckon they make up nearly 90% of the bikes on the road in Brazil.

So that’s part of the answer. I want a 400 because I’m too big to ride a 125 and can’t afford a 600, or even a 250 (running at about £2200). But that’s not all. I want a classic. I want the bike that’s the stuff of dreams, the one that commands respect and brings back memories of better days. The one with the boxy looks, the Comstar wheels, the slightly upswept twin megaphone exhaust, the all-important Japanese engine. And if it’s golden… oh bliss!

I have most likely bored everyone to death talking about politics and economics, and how this led to a very particular bike market, and how one model could manage to stand out. But I believe that’s the point. Being a classic bike has much more to do with the context within which it existed than with some ‘inner greatness’. 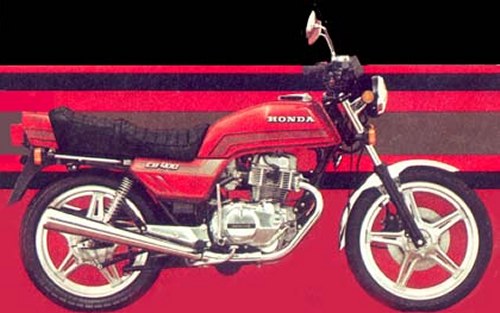 So, have I found it already? Almost.

For the last few months since I got my license, I’ve been scouring the ads and bike dealers’ websites, looking for it. Fortunately, they are not hard to find. It was a massive sales success, and there are quite a few CB400s from the early Eighties still running.

So I did my homework: joined the discussion groups, managed to get copies of the owner, service and parts manuals for the CB400 family. I was willing to buy a running bike which I could gradually restore over time, or, if the price was right, maybe even a non-runner, if I felt I could get it to run.

So one day I stumbled upon an ad that read ‘CB400 1983 – will exchange’. It was advertised at about £410 (pretty low, CB450s in prime condition can reach over £1000). I called the guy – who happened to be a teenager who had ridden DT180s on dirt tracks but still had no license – and arranged an appointment. He said the bike wasn’t running, that it needed a new wiring loom and electric overhaul (no problem, I know a thing or two about electronics…), plus a few other bits and pieces. Oh, and it had about £120 of pending fines and vehicle registration.

So I went over to see the bike. He had bought it a few months earlier, pretty much in the same state it was at the time. He had once managed to get it to run, but since he had been fired from his internship just after buying the bike, he never got around to fixing it. And the thing had been sitting at his house for some four months.

Right: remember the RealClassic advice on buying used bikes. Bring on all your expertise, pretend you actually know what you’re talking about, and take a closer look on the darn thing before making a decision.

Well, it’s red. It still has the original megaphone exhaust, and the round headlamp. Can’t find the rearview mirrors, there’s a big chunk of rear end missing. No problem, that’s merely cosmetic, cheap and easy to replace. The chrome is all shot, but what should I expect? 22 years in a very damp town… The electrics are indeed a BIG MESS, actually I don’t think there’s a single strand of wire going where it’s supposed to. The right hand grip is loose, there are no accelerator cables. Nor any of the switches. So far so good, a lot of work to be done, a bunch of cheap, readily available parts, guess I can lower the price and get a great deal.

Check the suspension. It moves all right, just needs new oil. The single disc front brake is at least stopping the wheel, the rear brake works but the pedal is bent. Let’s look at the engine. Made in Japan. That’s odd: a couple screws are missing on the crankcase cover, along with some chunks of aluminum. I wonder where they went. Look at the fuel tap: I can’t find no petrol filter, and that little plastic hose connecting it to the carburettor seems a little out of place. Pull out the kickstart and give it a kick. It seems to have compression, and turns all right. Shouldn’t there be an electric starter engine somewhere?

Let’s move on. Take a closer look at the handlebars, it looks twisted near the yoke, and there’s a big nick on the petrol tank. Exactly where the handlebars would hit it in a collision. Check the panel: the speedo and tacho are shot. Can’t find the tacho cable (maybe it went sightseeing along with the accelerator cables…). There’s no ignition key, the previous owner simply replaced it with a switch.

Now, THAT’S ODD. Maybe this was the point when it started not to seem such a good deal.

I turned my attention to the vehicle registration. It hadn’t yet been transferred to the current owner (which meant an additional fine), and I’d have to track down the previous owner. This is getting complicated, not to say suspicious.

After haggling a bit with the owner, I managed to get the price down to £375… (people will go really low when you offer to pay them cash). But I still wasn’t sure whether I should buy it. The untransfered registration and the absence of a ignition key, plus the pending fines made me quite uncomfortable. In the end I decided not to buy the thing. Too much aggravation, and I reckoned I would find a much better one just a little more expensive.

And I did. A couple of days later I found another CB400, advertised at £650. Red, Japanese engine, fair condition. Had been involved in a crash, which caused some cosmetic damage (a nick on the petrol tank, damaged engine guards), but it was running and all the documentation was ok. Perfect for my plan of a rolling restoration, but I was £100 short.

A couple weeks passed, and I managed to save a little more. As I was about to close the deal, disaster struck: my business partner decided to take off and go to London, for a year… And I found myself having to buy her share on our business – my hard-earned savings washed away in a couple of days.

So it’s back to square one. Saving a little each week and scouring the ad pages looking for that elusive CB400 at just the right price.

Anyone got one for sale, locally?