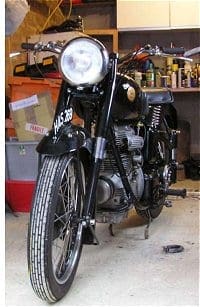 After falling in love with the dream of a Beam, Steve The Toast finally bought an S8. The reality turned out to be just a little… leaky!

Madness is said to run in families. It is thought to be genetic, but many other things can also bring it on; diets lacking in certain vitamins, over indulgence in alcohol and drugs, too much pressure of work and other illnesses – such as heart disease. So, basically, I had no chance of avoiding it at all…

The Great Harley God himself is the only deity who can tell you why I had decided that biking nirvana would be reached on a Sunbeam S8; he had already shown me the ‘true path to enlightenment’ with the products from Uncle Sam, which I know and love. The trouble was that each time I came to know and love one of Uncle Sam’s machines, a little something would also come along which meant selling it again. Four times this happened — before I decided that my nirvana bike would have to be something cheaper.

Last year we bumped, almost literally, into AJSBSA — a regular RealClassic site visitor and message board regular – at the Stinkwheel Rally. We wandered around the show then walked back to our bike taking a stroll past his Sunbeam. A super looking little British, inline twin with shaft drive… The last two words struck me like a meteorite. I took another look, and then several close looks, and was immediately smitten. Cupid’s arrow dug a full furrow through my heart.

I loved it. Advanced engineering principles, styling, the simplicity of its single overhead cam, shaft drive, inline twin – so different from run-of-the-mill parallel twins. I felt like Toad of Toad Hall… standing in the middle of the road watching it ride off, finding myself making Toad-like ‘brmm-brmm’ and ‘poop-poop’ noises to imitate the gentle rumble of the exhaust.

After being disappointed at a dealers, (see part one), I pursued the object of my desires long enough to unearth a suitable beast, via the Sunbeam dedicated website (www.classicglory.com). I wanted a runner, in as original condition as I could afford — what I definitely didn’t want was a project! This little shaft drive S8 seemed to fit the bill. So after several long conversations with the owner it seemed just the ticket – albeit a ticket to the other side of the country. 470 miles later at warp speed in the car with trailer, the S8 sat proudly in my garage. Black, gleaming, an easy starter and 98% original. Life was too good to be true… Uh huh.

My first ride out was to the MoT station. On the way there, I stopped off at a friend’s house to show off my new acquisition. His door opened as I pulled up. ‘Smelled the burning oil, then?’ I quipped. How prophetic. Suddenly, that particular smell assailed my nostrils. I looked down to see the engine was covered in oil — both sides of the engine, as well as the back and the front. My friend, a Britbike aficionado, smiled a knowing smile, and went indoors for spanners with which he vainly attempted to stem the brown tide running down the engine.

Rather than face the red-tape nightmare that is SORN, I resolved to carry on to the MoT station and get the brown ticket to match the brown colour which was enveloping the bike.

Charles the MoT man, a fine chap with a fondness for classics, liked the ‘cut of its jib’ and wheeled the S8 into the shop. As he did so, I noticed the trail of oil it was leaving, which could be traced back to the dinner-plate sized puddle on their forecourt. Oops. I wandered inside and stood watching as he performed his ritual dance of impending doom around the little machine.

Everything worked. All the bits were in the right places, and with a beaming grin (pun intended) he pushed the headlamp nacelle down to reach the required angle of illumination, gave me the nod and shot off to write the ticket. Passing me the Holy Document, he wheeled the bike outside as I divvied up for the cost of this excellent service.

Before I left, I noticed him spraying degreaser all along the shop floor and wiping up the mess left by the now fully incontinent bike, using wodges of paper towels. The S8 was using a total loss lubrication system, storing the used oil everywhere but in the engine. On going out to collect my P&J, I found an ever-expanding pool beneath it.

Therefore, my next port of call was 200 yards up the road, to a motor factor who stocks ‘straight’ oil, as in SAE 40. A gallon of Morris’s finest was purchased and, thanking the Great Harley God for the foresight of bringing a backpack with tools, I did have somewhere to stash the can after pouring nearly two pints into the engine. It holds only three.

Oops again. There seems to be a lot of ‘Oops’ involved with this ‘classic’ bike thing.

I left there, and trundled half way home, stopping at a different friend’s house (I didn’t dare go back to the original one – I might have to clear up the first lot of oil I laid down) for tea and to allow the Beam a wee chance to cool down.

After partaking of tiffin, I once more topped up the oil and headed off. As I had cunningly parked on the grass verge, there was no obvious mark of my passing. I dare say that soon a brown patch of earth will appear, where once there was lush, green grass. I plodded five miles further on, the little twin happily thrumming me along at a steady forty miles an hour, as it had not long ago had new shells and rings fitted. When I reached my home town, I decided that it would be a good idea to let the little devil have a breather and then top up the oil before thrusting her up a very steep hill.

Five minutes later, with an oil slick which the Torre Canyon would have been proud of, I topped up the oil again and hurried off before any Greenpeace supporters found me and chained themselves to the bike to stop it polluting any nearby sea lions, otters or seagulls (in Luton. In Luton?). The last three miles took no time at all, and soon enough I was in my driveway, rushing indoors for newspaper to shove underneath the colander that passes for an engine.

I unceremoniously shoved the S8 into our shed to take a look at it. The oil seemed to be coming mainly from the bottom of the bell housing (yes, and from everywhere else too). I prophesied that the rear crankshaft oil seal had died, allowing oil to pour out onto the back of the flywheel, which liberally distributed it around the bell housing allowing it all to run down and drip (pour, more like) from the drain hole. Bugger, yet again.

A quick look around the rest of the bike showed where a few (…understatement…) other leaks were coming from. The rocker box cover, camchain inspection cover, cylinder head gasket, gearbox side plate, oh, if there was a joint or a bolt, it had a leak. I also had a back tyre that was never, ever, going to rust. It was coated with a thick film of Morris’s finest 40. Just to add another little fly into the already fouled ointment, the bike’s electrical system had stopped charging.

There was only one thing to do.

No, really, I knew that I had to drop the motor out and fix the damn thing. Allow me a moment to reflect – didn’t I say no projects somewhere here? Hmm.

So, via the RealClassic message board, volunteers were invited to help lug the motor out of the frame and devour a plate full of Emm’s delicious bacon butties. I pored over the Sunbeam owner’s bible, Stewart Engineering’s Bedtime Book, so I was pretty sure that I knew everything there was to know about yanking an S8 motor out. What I didn’t know I could easily blag my way around. 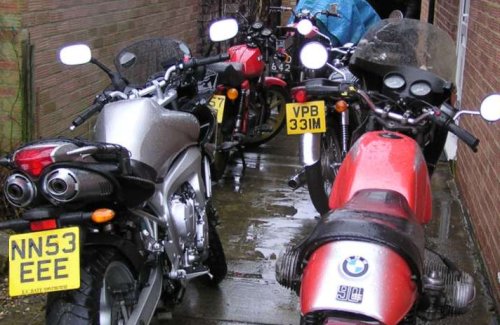 The cold Sunday arrived and, with a carton of milk, a pack of bacon in the fridge and a fresh loaf on the side, I set out with Emm to start the job. No sooner had we begun, than Paul (CB350) turned up on one of his venerable collection of Hondas. As we progressed, with Emm unbolting things as fast as she could, more able bodies arrived to lend a hand / extract the Michael / consume bacon butties. Will C on his Square Four, Paul (EVGuru) on a 250 Morini, Paul (G80) on his beloved Beatrice the Beemer, and his brother Barry on a brand new Fazer 6. That’s three Pauls in case you’d lost count. Oh, the ‘which Paul do you mean?’ jokes lasted for hours.

Soon lively debate filled the garage as much as the sound of spanners clonking against metal. It was only a matter of a couple of hours before the motor was ready to come out, but Emm took a break to be a heroine and made the bacon butties. We broke away from the garage and shared a huge serving plate full of sarnies, steaming mugs of tea and more chat. A chance to warm up hands was welcome too – it snowed briefly outside for a time. Once the munching had ceased, it was back outside into the cold to catch EVGuru’s fingers twixt frame and engine as, with much aplomb, we withdrew said engine and dumped it on the floor. Huddled down on the floor, I wished I’d invested in a hydraulic workbench years ago. 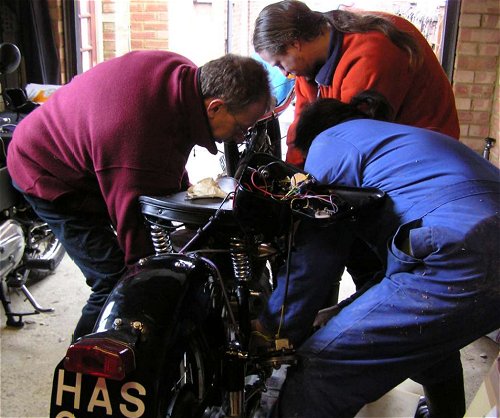 We decided that enough was enough for one cold day, we began to tidy up the tools and the garage as some bade their farewells; CB350 blagging a quick spin on EVGuru’s Morini before they went. It only took us half an hour to get the garage in some sort of order so Emm’s Divvie could be restored to the garage. We locked the door, gladly went inside and collapsed with mugs of tea and coffee as I began to plan the next stage…

Who you gonna call?