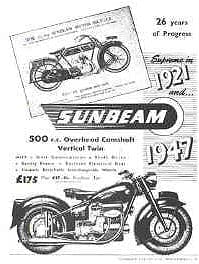 If you frequent the Message Board then you’ll know that Steve The Toast has been successful in his search for a Sunbeam. But how did this fascination begin, and what did he initially discover?

At my age, which is sadly no longer in the spring chicken category, but instead heading nerve-rackingly close to the Associate Membership of the VMC (Victor Meldrew Club) era, you’d think that buying a motorcycle would hold not only nothing new, but no fears either. It just goes to show you how, ahem, ‘off beam’ you can be. I say ‘off beam’ for a reason – not only is it a good expression, but my prospective purchase is, indeed, a Beam. To be more precise, I’m in search of a Sunbeam motorcycle, of the S8 persuasion.

To this end, I have been reading everything ever written about these bikes, even to the extent of sitting in motel hallways during sleepless nights so as not to disturb my partner. I have digested great works by the likes of D W Munroe who wrote Pearson’s Guide to the Sunbeam, and Robert Cordon Champ’s two tomes, the Sunbeam Profile and The Illustrated Book of the Sunbeam, plus various website reviews, magazine articles including the latest buyers’ guides and lastly, but be no means least, everything on the best website dedicated strictly to Beams: www.classicglory.com

With all that info amassed, I now know a thing or 274 about these bikes. Fear not, I intend not to impart one iota of this colossal amount of info here, so breathe a sigh of relief and pull up a chair.

I replied to many pages of advertisements in magazines, and spent a fortune phoning classified advertisers only to find out that the bike was sold two months ago. Slowly, I began to become despondent, and turned to the Trade adverts. 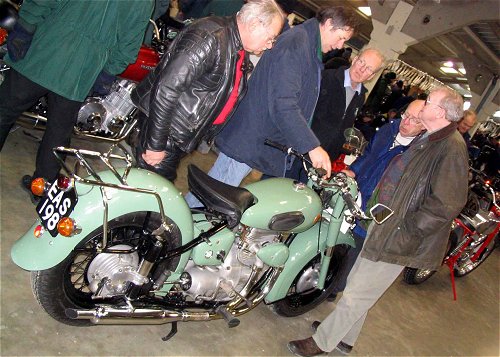 It’s not unknown for me to watch the dealer’s ads to see how much they are trying to sell a particular model for – and then to compare it to the private ads. The same models can usually be found privately for easily less than three-quarters of the dealer’s price. True to form, I found this to be so with the Sunbeam. Private bikes range from £2000 for runners, or even £1400 for ‘complete but in bits’ projects. The dealers I’ve noticed only seem to have complete bikes. These tend to start at around £2600 for ‘running but needs fettling’ to a stunning £5000 and more for top quality ‘perfect restoration’ bikes.

My failure to find anything privately had me watching the dealers a little more closely than usual. I spotted one chap who is a ‘buyer and seller’ (as opposed to an ‘enthusiastic specialist’, the kind who stock parts and do repairs). He had an S8; MoT’d and taxed, but in need of the aforementioned fettling. Now, there’s fettling, and then there’s fettling, and it all depends on your definition of the word. What I found when I got to the bike was, in my experience, a bike which had no right to hold the coveted MoT certificate.

For instance, the front brake cable was 50% longer than it needed to be (so it hung out of the left and right hand sides of the bike). Where the outer cable should be supported on the bottom of the right-hand fork leg, the cable was routed through a rear-wheel brake rod fitting from a later Japanese bike. The outer sleeve wobbled around all over the place, and was in danger of slipping through at any moment. The whole affair was finished off with a rickety-looking split pin through the brake-actuating arm.

This got my back up straight away but I bit my tongue and forced myself to carry on, trying to take an objective view of the rest of the bike. The petrol tank’s underside was coated in something. I’m not sure what, but it was something – but not metal. Ah ha, I said to myself. This has been leaking, then. The seat didn’t quite sit right, the spring on one side was a bit ‘off’, but it could well have been ‘sag’. This is a 50-year-old bike, and I wish I’d sagged only that much at 40!

Under the seat, I found a cheap and nasty Taiwanese beep-beep horn, the Lucas Altette long gone from its mounting by the footrest. Ho well, onto the rear mudguard. On the top of this, there were four boltholes where, presumably, a rear seat had once adorned the bike. Now there were four shiny headed bolts and, next to one of them, a crack. No, I tell a lie, it was a valley. Some car body filler had been used to fill the mudguard. I suppose that rust has eaten away around the boltholes and this was a cheap way of smoothing over the crack, except that a chunk had jumped ship for a better place.

There was wire sticking out from around the exhaust clamps where someone had tried to pack it out. And there was a wire, which seemed rather homeless, dangling by the spark plugs – and they themselves had mislaid their alloy cover, the silly darlings.

The rear sidelight didn’t, but amazingly the brake light did. It was so bright, in fact, that I expected the bulb to blow next time the bike revved up. HOW bright? Not much voltage regulation going on here then! And it was the wrong rear light and number plate mount.

So; thus far I’d not found much that was original or serviceable. The backlash on the final drive was fine, but the rear brake had bodged linkages with split pins in. The clutch worked but… when I selected second gear the gear lever plunged unstoppably downwards. Oh dearie me; no functioning return spring, it would seem.

The trader (bravely) offered to let me try the bike out. However, with the brakes such as they were and a limp gear lever, I had no intention of taking on traffic with it. I rode it gingerly up and down the road a few times, managed to find most of the gears despite the flaccid lever, and decided I’d seen enough of that particular Sunbeam. I made my excuses and left. It wasn’t necessarily the trader’s fault (I doubt that he carried out the bodges), but I still wanted to phone someone, make a complaint, stamp my little feet until something was done – but what is the point? Caveat emptor, I’m afraid. Surely no one buying such a 50 year old motorcycle, ‘in need of fettling’, will be naÃ¯ve enough to take the MoT at face value? 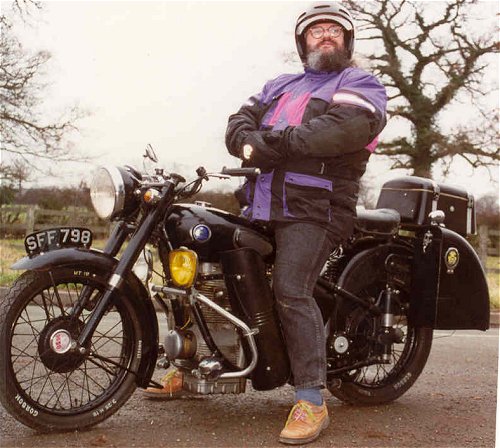 Later that day, I met up with Frank and Rowena of this parish and we chatted generally about life, cats, the universe and bikes. I brought up the subject of my hunt for a Beam, and mentioned my unfortunate find that day. Frank nodded knowingly.

‘Forget the Sunbeam. You’ll hate it. It’s slow, doesn’t handle well and is fragile. What you want is a nice Triumph, or maybe a BSA. How about an Ariel?’

‘No,’ I protested; ‘Everyone rides a Triumph. You ask any Johnny Foreigner to name three British bikes and they’ll always come up with Triumph, BSA or Norton. I want something different – something, oh, unusual – shaft drive preferably’. My perversion for shaft drives is well known.

‘Get yourself a T3 – nobody on our staff has one’ suggested Ms H.

‘I love T3s, I’m a big fan of Guzzis, but it won’t enjoy plodding along with the Enfield. Guzzies are only really happy loping along at eighty to ninety when they come into their stride and seem to make some kind of sense,’ I protested. Again.

‘Nice 350 Triumph’ continued FW, and I bowed to his greater knowledge. I could see what he was on about and the sense it made, but I’ve been there, I’ve done them and they don’t really hold any appeal for me.

Later that night, suffering from insomnia brought on by far too much fizzy pop (it’s loaded with preservatives and sweeteners which my body, in its advanced state of decay and neglect, cannot tolerate), I picked up my Pearson’s Book of the Sunbeam, and headed off to read. My head was spinning, full of thoughts about whether or not to take excellent advice and ignore my own feeling and desire, or to ignore the sensible course of action, and go with my whim. There are many exponents of the Sunbeam who whole-heartedly support my desire for one of the last Beams to be graced with the Sunbeams logo (even if dear old Mr Marston was long gone when the S8 was produced under the auspices of the BSA consortium).

It would be all too easy to say that one of the people encouraging my Sunbeam fetish is the only surviving specialist and the best-known supplier of spare parts – but it wouldn’t be true. He gave me stern warnings, as well as sound advice on what to buy and what to avoid like the plague. The compiler of the classicglory.com site (who stands not to make penny from me), also dished out help. A RealClassic regular from the message board, who runs one of these bikes on a regular basis, also condoned my madness.

So am I to follow the herd? Must I have a Triumph because that is the bike to have? Is that the natural choice because they are common, spares are readily available, and they’re relatively fast?

One of the joys of riding classics is that my constant irritation with those blasted speed cameras will be a thing of the past. My XJ will too become a thing of the past, I will plod happily around on my 500 twin and enjoy the experience, rather than relying on my observational skills and hard braking to keep my license out of harm’s way. The fun of riding a 135mph rocket has been sucked to death by the nanny state.

So I need to shake off the excessive speed, remove the opportunity to double the speed limit, and meander along at a pace that is not only more fitting for a man of my advancing years, but more seemly also. I can hear you all now; ‘Oh, you’ll certainly manage that on a Beam, won’t he, lads!’ amid your chuckles and guffaws.

I certainly hope so. Otherwise, all this chasing about after relics is a pointless exercise, innit? But once I’ve found my Beam, the my partner’s Enfield won’t have to be thrashed and trashed mercilessly in order to keep up with me. In fact, I estimate that the motorcycle boot will be firmly on the other foot, as they say! 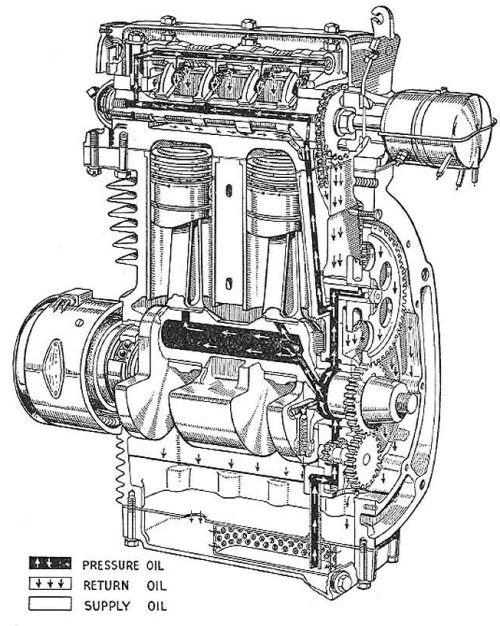