The autumn Stafford Show hosts the sale of 50 fabulous classic racers and replicas, an auction of Jim Redman’s race trophies, all the usual specialist stalls, club stands and motorcycle displays – and you can help to choose one of the winners of a new concours award…

Like the world of classic motorcycling which it aims to represent, the Stafford Show isn’t especially sleek or achingly upmarket. In keeping with the character of most old bikes, it’s an event which has evolved over decades. So it’s a rambling, quirky assembly which now sprawls over the agricultural showground at Stafford for two weekends of each year. It’s not like those sterile bike shows which take place in purpose-built exhibition centres: it can be vulnerable to extreme weather, and you do need a sense of adventure (and a map!) to successfully explore all the halls and tented walkways, upstairs and out back, around the marquees and rows of outdoor stalls. It can be frustrating at busy times: it’s almost always rewarding and entertaining.

The Classic Motorcycle Mechanics Show takes place on Saturday October 20th and Sunday October 21st 2012 at the County Showground in Stafford, UK. Although the autumn event is well known for featuring mainly Japanese classics, there’s usually a very strong contingent of British bikes too and many classics from the Continent, as well as displays of off-road and racing machines.

More than 70 owners clubs will be distributed around the various halls, putting on carefully planned displays of bikes of the marque or recreations of yesteryear in an effort to attract the attention of the crowd – and the judges.

Stafford also hosts the final round of the Classic Bikers Club Bike of the Year Award. This competition takes the overall winner from earlier events throughout the season, and invites the public (that’s you) to vote for your favourite among the six finalists. First prize for the winner is £1000 worth of wonders from GP Legends and a unique trophy built using parts from John McGuinness’s works Honda Fireblade motorcycle. 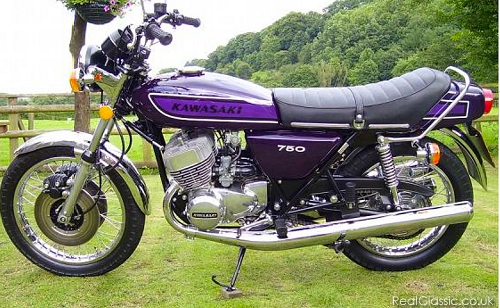 The finalists span half a century and range from early vintage machines through to Japanese classics of the 1970s. So you get to choose between a DMW Typhoon, 1925 Neracar, Yamaha YAS1, New Hudson Popular, a Kawasaki H2C or a Norton 750 special. Voting takes place online BEFORE the event and closes on 12th October 2012. Full details about each machine and instruction on how to vote can be found at: www.classicbikersclub.com/articles/2012-09/cbc-bike-year-2012

The Bonhams Auction takes place on Sunday 21st, with lots available to be viewed on Saturday. Six times world champion Jim Redman has decided to sell many of his trophies from his racing days, and these are expected to attract plenty of attention. Most of the awards are silver replicas from Jim’s TT wins during the 1960s. 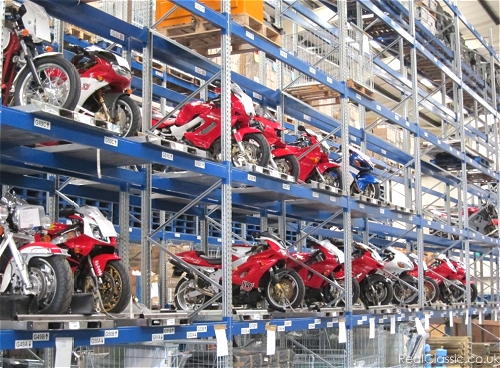 Some 180 motorcycles will also be auctioned during this sale, with the Jenkins Collection of exotic race-replicas and special editions being offered without reserve. The machines are mainly Japanese with some British and Italian bikes and include limited-edition models and homologation specials like a 2002 Yamaha 750cc YZF-R7; Honda SP-1 Joey Dunlop commemorative model; Ducati 916SPS Fogarty Replica; Honda CBR1200XX Super Blackbird 50th Anniversary model, and the ex-Holeshot Racing, Jarrod Frost, British Land Speed Record 1999 Suzuki GSX1300R Hayabusa – alongside some more commonplace (if that’s the right word…) classics such as a CBX1000 and a Bimota SBR6. Price estimates start at £2000 for the more mainstream machines.

Kiwi motorcycling champion Graeme Crosby will be the Show’s guest of honour, giving interviews and appearing on the main stage. Former Grand Prix rider Crosby won the Senior TT and Suzuka 8 Hour endurance race in 1980; he’s also taken top honours at Imola and Daytona and is one of New Zealand’s most famous racers. 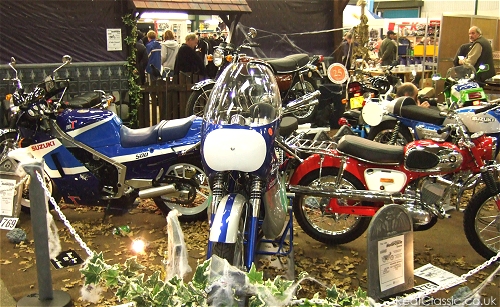 Although the emphasis has changed in recent years – away from old-stock autojumble and towards newly manufactured replacement parts – Stafford still has an expansive array of stalls selling bike bits. There are more than a thousand traders booked in, offering new and secondhand spares, tools, leathers, workshop and restoration services, insurance, workshop manuals, books, memorabilia, transfers and many complete motorcycles, often freshly imported or repatriated. So if you don’t have a winter project before you visit the Show, then you might end up with one before the weekend is over…

For many a year, the RealClassic stand at the Stafford Show has been located in the splendid surroundings of the Sandylands Hall. However, it has occurred to us that staying firmly fixed in our familiar niche means that while we always see the people who know where to find us, we might miss out on meeting new readers – especially those footsore folk who can’t quite stumble that far.

So we fluttered our eyelashes at show organiser Nick Mowbray and he generously allowed us to relocate. Hence (trumpets, fanfare) for the first time ever, the RealClassic stand will be in the main hall at this month’s Show. You’ll find us on Stand 179 very near the main entrance; coincidentally within dashing distance of the Bingley Arms pub, the shop, the stairs to the balcony, and toilet facilities. So don’t forget to take an extra turn around the main hall and say hello – all RC Club members can snaffle a HobNob from our show stash… 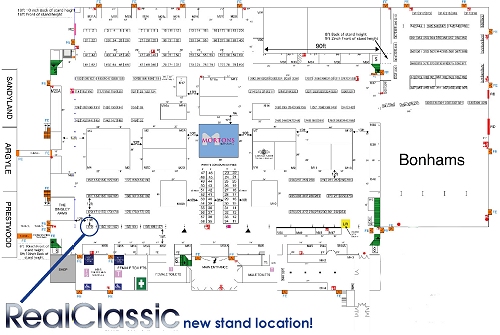 The Stafford Show opens 9am to 6pm on the Saturday and 9am to 5pm on the Sunday. Parking is free but queues can build up on the Saturday morning: either plan to arrive early or later in the day (or relax with a later start on Sunday when it’s much quieter). Dogs on leads are welcome.