When we say ‘hot stuff’, we’re not actually referring to Editor Westworth and the RC Roadshow (although Frank’s new book is a tiny bit spicy in places). No, the headline is a totally predictable play on words because the extra-special guest of honour at this autumn’s Classic Motorcycle Mechanics Show is world superbike star Frankie Chili – chili / chilli: see?

In a very rare public appearance, multiple GP and WSB winner Pierfrancesco will be interviewed live on stage in the main hall. He’ll be sharing race recollections, stories about his ongoing racetrack scraps with Foggy, and his own unique insights into his world-class career. ‘When I won it was for all the people, not only for me or my team,’ says Frankie. ‘Sometimes I pushed a little bit too much and fell down, but that was my style – I did not make so much calculation in my races; I wanted to just win!’

Look out for Carl Fogarty too: the four-times WSB champion will be stationed on the Oily Rag stand on the Saturday, while Jim Redman and Steve Plater will also be appearing over the weekend. 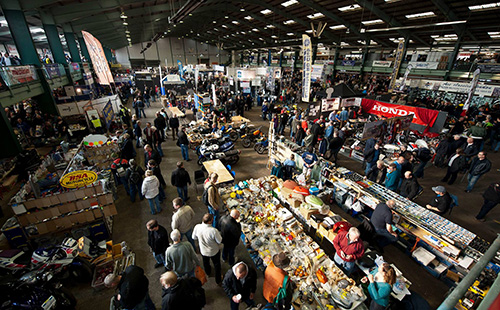 Then there’s more two-wheeled sporting action at the Classic Racer GP paddock, with mud-pluggers getting suitably grubby at the Classic Dirt Bike Experience. In a new feature, owners with classics in the concours displays will be invited to the main ring to show off their roadgoing P&Js to the public in two parade sessions each day. Guest commentators will be talking about the history of each machine and the work that has been done to it.

You can also expect the usual huge array of classic bike clubs, jumble stalls, trade stands and specialists, plus the giant Bonhams auction with viewing on the Saturday and the sale itself on the Sunday. The auction house will be hoping to repeat last year’s success which saw 436 lots sold to make a combined total of over £1.3 million and set a new world record for the sale of a Manx. A consignment of Barry Sheene memorabilia including his famous crash helmet and race leathers will go under the hammer, as will seven bikes donated by Blur’s lead guitarist Graham Coxon with proceeds to benefit the NSPCC. 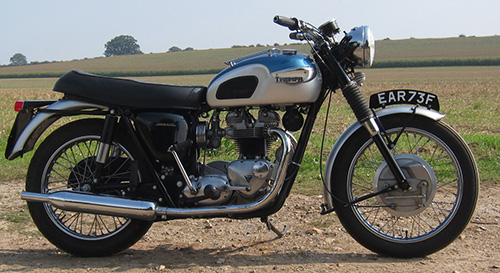 Come find the RealClassic Roadshow upstairs on the balcony above the main hall in our new location, next to the bar. Anyone who subscribes to the magazine at the Show (or renews an existing subscription) gets to take home a super FREE something – last time it was the massively impressive Encyclopaedia of Motorcycling, normally priced £35, so it’s definitely worth coming to see us before stocks of Interesting Things run short!

We’ll be also selling back issues, binders and bits, and chatting to anyone who’s kind enough to arrive clutching two coffees (white no sugar. Thank you) throughout the weekend. Frank will have his pen ready to ruin your copy of his book by signing it with a personal dedication…

All this takes place on 18th and 19th October 2014 at Stafford County Showground. We always suggest you come on the Sunday if you can because it’s much quieter than the Saturday, which gives you more space to move around the see the exhibits. The Show opens 9am both days. Parking is free, and discounted advance tickets (£10 per day) are available from 01507 529529 or