These sleek and sporty single-cylinder machines should’ve been the stars of the 1980s, making the most of the cult of the cafÃ© racer. Instead, people bought UJMs. Anarchy wonders if history is about to repeat itself…

Once upon a time in a green and pleasant land, motorcycling had evolved from mostly British bikes to an assortment of fast Japanese two-stroke mopeds and motorcycles, then onto the UJM multi-cylinder four-strokes. Because of the high accident figures from 16-year-old moped riders the laws had been changed and this, along with economic factors, contributed to a decline in motorcycle sales during the 1980s.

Remember the 1980s? George Orwell’s 1949 novel ‘1984’ describes a totalitarian government bent on total manipulation and certainly the video bites of bloody faced miners being beaten by police officers for two years echoed the authors prophetic words. Strange times to be born into.

Manufacturers keen on increasing sales canvassed their customers and asked what kind of motorcycle they would like them to build. The mass majority asked for a ‘real motorcycle’, one that was nimble with neutral handling, had good fuel economy, sufficient power but most importantly captured the heroic feel of motorcycling from years gone by. Ghosts of the Gold Star and Velocette still haunted the souls of real motorcyclists and a new motorcycle that could capture some of that X factor and still be reliable and useable as a daily ride was an overwhelming choice. Have your cake and eat it, so to speak.

So the Japanese companies went away and built what the customer asked for, and in Yamaha’s case it was firstly the SRX400. This was a 400cc single cylinder motorcycle with kick-start only and a low-slung weight distribution. It used two carburettors to feed its one lung of power with the smaller of the two used for low speeds whilst the second larger carb chirped in at higher throttle openings. This arrangement gave astonishing fuel consumption whilst still having maximum power available if the bike’s throttle was opened wide. Smart.

Unlike inline four-cylinder motorcycles the SRX is wasp like with its petrol tank moulded as if from molten metal, nice and narrow with most of the fuel capacity placed at the centre of the bike. The riding position was spot on with just the right compromise of low, clip-on handlebars and rear sets to give a sporty position — yet not strain the back and wrists on longer journeys. The engine was derived from their XT range of dirt bikes, which was proven to be rugged, and it had a slick 5-speed gearbox.

In its home country of Japan, where the market is very fashion conscious, the SRX went down like a storm and it quickly became a lusted-after fashion bike. The SRX400 was never offered to the UK (like so many really good bikes). Instead the marketing department spoke with the Yankee Doodle Dandies and decided that a 600cc version was a better choice, using the XT600 engine that was a popular model already in the USA.

How could it fail? Building a bike that everyone said they wanted using technology from an already immensely popular model? A sure fire winner without doubt?

Well fail it did, and in a momentous fashion. Buyers liked it but voted with their wallets for yet more four-cylinder UJMs, and in two years it was all over. There was talk of large stocks of bikes being purchased by clubs at knockdown prices but many collected dust in showrooms to be broken for parts or shipped abroad.

The SRX600 was also officially imported into the UK where it did a tiny bit better but was still a flop and it never sold in Japan where the draconian engine capacity laws restricted most bikes to 400cc.

End of story? Well actually not quite. The SRX continued to be manufactured and sold extremely well right into the late 1990s in Japan. It was a huge success there, the Japanese had better taste. A huge number of fan WWW sites sprung up around Europe and like so many bikes that had a bad start in life it quickly became a cult bike. As a last ditch effort to get more sales in Europe and the USA the SRX was revamped and fitted with an electric start because their customers said it must have one.

Sure enough, even with an electric foot, the customers’ wallets stayed firmly clamped shut; indeed the later restyled SRX had more of a girly image and is unpopular with the cult clubs even though it is technically a much better bike. The raw cafÃ© racer image of the original SRX was somehow lost in the translation. 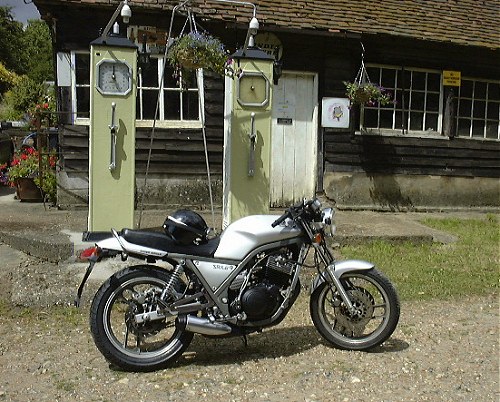 I’ve owned both an SRX400 and an SRX600 so can give you an idea on how they compare. The SRX600 is not fast, you will not be pulling power wheelies but you will be making rapid progress. Starting the 600 takes a more hefty kick and the engine has a little more vibration though a lot more torque. Fuel consumption is roughly 60mpg and it can keep up with most bikes on normal roads but will get left for dead on long straights. 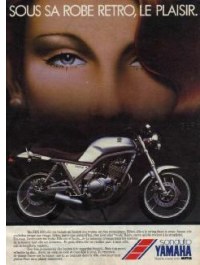 The SRX400 is in my opinion the wiser choice. It is so frugal on petrol that it gets embarrassing at the petrol pump with close to 100mpg on a tour. It is simple to kick-start and the engine is sweeter but lacks the urge of the larger bike although will cruise all day at 75-80mph.

The gearbox on the XT based engine has a notorious weak spot of fifth gear stripping. The 600cc motor eats these gear pinions whilst the 400 seems to be fine as the power loading seems to be within the gearbox tolerances. There is apparently an improved fifth gear pinion that can now be fitted that is supposed to be bullet proof.

Rivets all nicely counted then.

I’ve even crashed one and they suffer little damage with only the alloy clip on bars bending, indeed many have the left bar bent through falling off the sidestand so don’t be put off if you notice that. The frame is clever as it wraps tightly around the motor yet the downtubes unbolt for maintenance. Like all Yamaha motorcycles of this age, the run/stop switch goes faulty and can cause hard starting. Worn carbs also cause the dreaded hard starting from hot on the larger capacity bikes. The silencer is way too quiet and fitting a free-flowing item with a rejet will transform the bike. 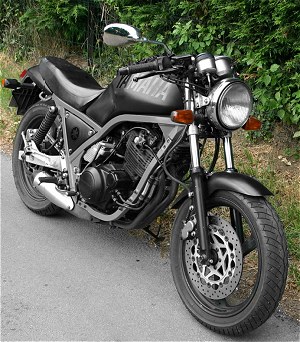 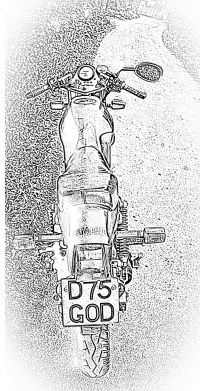 Neither of the models of SRX is difficult to get spares for as they share many parts from the Yamaha parts bin, such as TZR wheels and XJ brakes with an XT engine.

There are some high quality parts such as the beautiful alloy oil tank and alloy sprocket covers and side panels. Indeed the bike was so expensive to build the retail price made the bike even less attractive against the cost of a four-cylinder motorcycle. Another nail in the coffin: thud, thud!

I like all the detailing such as the alloy dash with the central speedometer and tachometer fitted off to one side like an accessory on a cafÃ© racer. The seat height is very low and the bike is light and nimble and with its narrow size I really haven’t found a better bike for taking on the urban jungle and filtering through west London traffic.

My last one ran well up to 80,000 miles before I sold it on, still running good and starting easily. Never needed repairs and I don’t think I ever replaced the spark plug either.

Most of the SRX bikes are grey / parallel imports although a few are official. The red dash light that lights up at 55mph is the main giveaway on the imports signalling that you really should not be having so much fun on Japanese roads. The UK seats were more padded, I guess because the average rider weight is higher in the west. UK bikes have twin front brakes that I found no better that the larger Brembo four-pot type on the imports. Both are very good.

So the SRX has all the credentials of a true classic bike. A troubled youth forced it into a cult sub culture, a rebel without a cause, rarity, age and a riding feel that recaptures the cafÃ© racer greats like the BSA Gold Star but without the white finger trauma and purchase costs of the Beezer. 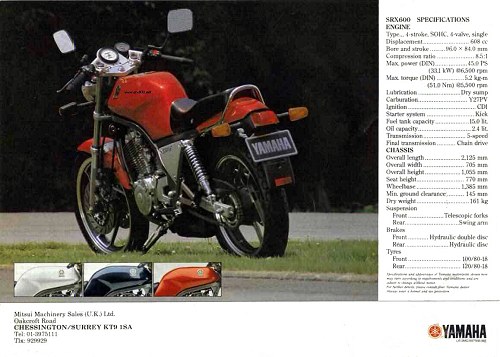 Time moves on and you think that manufacturers learn their lessons but now there is a rekindling for this kind of bike once again. Just like flared trousers coming around once again Yamaha have just released the MT-03, a wonderful 660cc thumper that I would dearly love to own.

In Yamaha’s words: ‘…born for the kind of 21st century roads where bigger high-performance bikes struggle to unleash their full potential. MT-03 (SRX?) has instant, pulsing low-down power from its single-cylinder engine and a totally new sports chassis concept engineered for hardcore street sports riding. You get a short wheelbase, low seat height, focused centre of gravity and forward-biased riding position for hyper-manoeuvrability, superb rider feedback and excellent traction. So MT-03 (SRX?) is perfect for intense fun riding, it doesn’t matter whether you’re doing it on tough urban streets or mountainside hairpins.’ 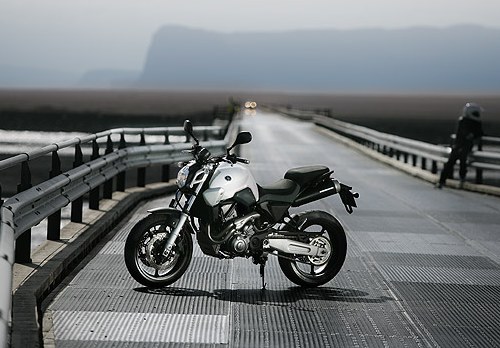 So in a year or two, when the MT-03s are piling up in warehouses unsold and the price has plummeted because people still carry on buying four-cylinder sports bikes, I’ll be there to snap one up. Like the SRX they are a true rider’s bike. If the MT-03 is a success then perhaps the SRX was just before its time and a little misunderstood.

I guess the moral of the tale is ‘Be careful what you ask for!‘