In the search for a ‘modern classic’, there’s one marque which inspires roughly equal amounts of devotion and detestation. Jim Peace didn’t think too much of Harleys. And then he bought one…

It was a complete impulse buy. I’d called in at my favourite local dealer, looking for something to replace my Honda GL1000, when I spotted a Harley-Davidson at the back of the showroom. Actually, it’s a big shed, but showroom sounds more posh. It wasn’t really my sort of bike, but for some reason I kept going back to look at it. Now, I’d spent the previous twenty years being very rude about Harley-Davidsons, particularly the old Sportster owned by my brother, and here I was looking at one with intent. I justified my interest by using the old maxim ‘Don’t knock it till you’ve tried it’. Twenty minutes later I’d bought it.

Well, a blue 1989 Sportster 1200 with belt drive conversion, and a ‘large’ tank. This was the last year with a four-speed box and chain drive as standard. The bike had 19,000 miles on the clock, which appeared to be genuine, and was in reasonable condition. I paid £3250 for it, which was a fair price, and they made me a good part-exchange offer on the Honda.

Riding the Sportster home I couldn’t believe what I’d done.

The bike was, not to put too fine a point on it, dreadful.

The key and choke control were down by my left knee, and awkward to get at. The clutch was heavy, the front brake needed a six-finger grip and I only have four, and the gearbox was straight off a tractor. Also the footrests were too high, in relation to the seat. I’d anticipated some vibration, but it was far worse than I’d expected. And it was quite clear that the engine was being strangled by the standard silencers.

I was not a happy bunny.

Then, slowly, I started to get the hang of it. I immediately replaced the silencers with a less restrictive pair that I found at a car boot sale. Noisy? Sorry, I can’t hear you. I kept the originals for temporary use at MoT time. With the new ones the torque was fantastic. This bike really could pull out tree stumps. The power came in from tickover and was enough to get the bike rolling. It was impossible to stall, possibly because it was designed for Americans more used to vehicles with automatic transmission. The four speeds in the gearbox were quite enough; once in top it was simply a case of using the throttle. I made 56% fewer gear changes on this bike than on any previous machine. OK, that was a guess, but 62% of all statistics are made up, anyway. The brakes were just about adequate, but I could understand why a lot of riders upgraded them. 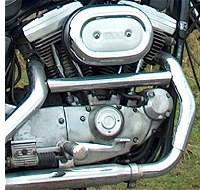 Having decided that I could live with the bike, I set off for a long weekend in Wales. Before going, though, I replaced the metric spanners in my tool roll with an old set of AF (American Fine, Across Flats, All Fractions? ) which I found in a box at the back of the shed. Nothing went wrong. Nothing fell off. The vibration wasn’t too bad at higher revs, and overtaking was a revelation. Check mirrors, check the blind spot, move out and twist. There was a roar and a shudder, and we were well into speed camera territory. Harleys may not be fast, as in stupidly, blindingly fast, but they don’t hang about, either.

First I got used to the bike; then I got to like it.

I joined the Harley Riders’ Club. Not HOG, the official club; they’re just a bit too official, if you know what I mean. The Harley Riders don’t take themselves, or anyone else, too seriously. I went to a couple of their rallies and really enjoyed myself. Nice bunch of people.

A good owners club can really enhance the enjoyment of owning a particular make of motorcycle; if you can’t decide what to buy, check out the club! I’ve heard that some people buy old Ajays and Matchboxes just so that they can join what I’m told is the best owner’s club in Britain. I’m sure they’re jolly good bikes, as well. Ahem.

The Sportster proved to be completely reliable in the sense that it always got me home. Electrical connections tended to come adrift, though, so I was sometimes left without lights, indicators or tacho.

The first MoT, however, turned out to be very expensive. The exhaust system had rotted through, and, while removing the remains, I snapped off a stud in the cylinder head. Secondhand exhaust pipes, fifty quid; having the stud drilled out and replaced, £150. Luckily I managed to cure leaking fork seals by using STP.

Servicing wasn’t too bad, though; the spin-on filters weren’t too expensive and the American oil was actually cheaper than our native product, wherever that comes from. Incidentally, the price of oil in America is a joke; I once worked out that if you owned more than three motorbikes and a car, you could save money by flying to somewhere like Boston, and buying your oil at a K-Mart. Nice idea.

Weekly maintenance (yeah, right) was easy. The bike used very little oil between changes. As the motor was dry-sump with a separate oil tank, the level could be easily checked. The belt drive never needed adjustment, and the tyres just didn’t go down. ‘A look and a kick’, every so often was quite enough.

There is no doubt that riding a Harley-Davidson gives you a lot of street cred, especially if you have loud silencers. Small boys point you out to their mums. Young women turn and look, then gaze adoringly. Policemen smile indulgently. Other bikers treat you with deference and respect. I’m making all this up, but riding a Harley is good fun from the social point of view.

Although the Sportster models are small by Harley standards, they are still quite big motorbikes, and thanks to the company’s aggressive marketing policy, instantly recognised by Joe Public. I quite enjoyed being part of the Harley-Davidson lifestyle. I didn’t go so far as to buy a new leather jacket with tassles, though, but I did get the coffee mug (NB: now replaced with a RealClassic job in lightweight Polywossname ). 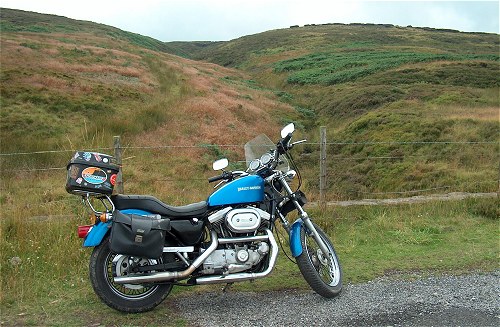 After a few months, however, the excitement started to wear a bit thin. I became increasingly aware that this was not a practical motorcycle. Having ridden from Faro to Madrid in ten hours on an old Suzuki GT500 I am perfectly capable of riding long distances on old clunkers, but the Sportster was just too much like hard work.

In the end I went too far; I simply tried to do too many miles in one day.

A day trip to Scarborough may not sound excessive if you live in Yorkshire, but from my home in the Surrey stock-taker belt it was 250 miles each way. Coming home, the last hundred miles were hell. My legs ached, my bum hurt, my arms went numb. Worse, the vibration affected my vision, which was dangerous. The problem here, as any fule no, is the inherent imbalance of a V-twin engine. For some reason certain configurations are better than others, and the 45-degrees used by Harley-Davidson is not the best angle. It also makes the engine top heavy. I have read that 90-degree V-twins vibrate a lot less, and the 72-degrees used by Yamaha is even smoother. Whatever; the bike shook like a road drill, especially if I used supermarket petrol, and would, I eventually decided, have to go. 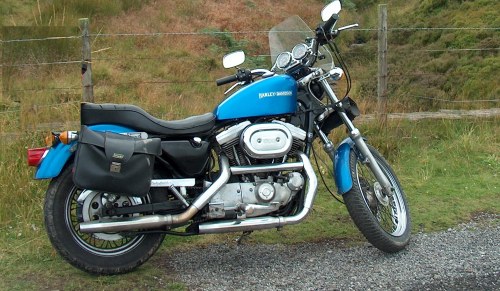 The idea that Harley-Davidsons don’t depreciate is a bit of a myth. OK, if you buy and sell privately you might not lose too much, but if there’s a dealer involved he’ll want to make a profit. I don’t want to start a private versus dealer argument here, suffice to say that, on balance, I prefer to deal with a reliable and established business. One that is likely to be there the next day. I’ve had some nasty experiences with private deals, both buying and selling. In the end, having covered over 8000 miles, I got £2000 in part exchange. Not good, but it could have been worse.

So would I buy another Harley-Davidson?

To be honest, no.

I’m glad I’ve owned one, so that I can now be rude about them from the point of view of experience. But there are just so many other wonderful motorbikes out there to choose from, and they needn’t cost a bomb, either. Time to move on.