Graham Ham will shortly be setting off aboard his Triumph Speed Twin, on an epic quest to visit the classic bike sheds of the British isles. But why?…

RealClassic, your favourite , has been knocking around for quite a while now. Along the way me and Daisy, my 1948 Triumph, have had rather a lot of fun polluting its pages with our various yarns. After pieces in the first few issues, covering our early adventures, Daisy had a rebuild. I wrote about that, which was all very fine, and those pieces became the foundation for a monthly feature challenge, which in turn morphed into a series whereby we visited a bunch of owners’ club rallies and by the time that little lot was done and dusted, we’d been in RC every month for well over two years.

That, I considered, was by far long enough to be inflicting ‘beardy bloke rides rattling old Triumph to yet another party in a field’. It was time for a break, which turned into a year, two years, then three. The pages of RC were blissfully devoid of parties in fields, if not beardy blokes or Triumphs. I was far too busy riding the wheels off of Daisy and, well, partying to be honest, to write about anything.

But… (and you’ll notice that’s a tenacious, we’re not going to give up, ever, kind of a ‘but’) … the editorial team never passed up any opportunity to nag me throughout the entire period. On the odd occasions we met up, like at the excellent Kempton Park autojumbles, the same litany of questions would be aimed in my direction. Had I written anything? No? Was I going to write anything? If not, why not … and if so, when? I lost count of the number of times I left Kempton, or Ardingly, with Frank’s voice ringing in my ears: ‘Write something! Send me a CD!’ and it didn’t stop there.

If we didn’t meet for a while, I’d get the odd email bemoaning that fact that another week had passed, no CD had been forthcoming and wasn’t it past time that one did? Eventually I caved in (Frank really is a persuasive, tenacious beardy person), the feature series ‘Over the Hill’ was born and I spent the next two years writing about all the fun I’d been having over the past two years or so.

Why am I telling you all this? Well, because the whole pattern is repeating itself and this time you lot, or at least a goodly number of you, are entirely to blame. My most recent attempt to slide gently into dribbling obscurity has failed spectacularly and this time it’s your fault!

When ‘Over The Hill’ had, in my view, run its course; reached its sell-by date if you like, and the time had come to scrape it gently into the metaphorical pedal-bin before things became rather too stale, I thought that would be that. But no. A howl of protest echoed around our fair land. Well, OK, not a howl maybe … more of a shout. All right, not exactly a shout … more a sort of distant grumble? Enough of you wrote in to make Frank embark on an immediate, extended nag. My protestations that I couldn’t think of anything to write about that was sufficiently different to what I’d already written about, simply met with the easily said, but less easily achieved suggestion that ‘I’d think of something’ …

I came up with something that I was sure no mainstream magazine would ever actually run with. Even if they did, no reader in their right mind would actually respond to it, surely? Honour would be satisfied, but I’d be able to slink away into the snug-bar of the Badger & Bulldog and fade into obscure memory. Daisy would be allowed to fall apart gently, and life would go on. I had, of course, entirely forgotten that RC is anything but a normal old bike magazine. Its editor is anything but a boring, cautious, run of the mill office-wallah and, of course, the readership has, amongst its’ vast ranks, an impressive number of folk who are, to call a spade a spade, as mad as a fish on a bicycle. In fact, more folk responded than I could possibly ever get round to, even if we ran the series for years!

Strangely though, now it’s nearly upon us, I’m really looking forward to it! 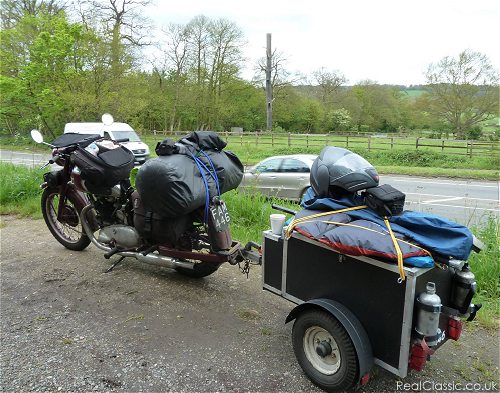 Graham Ham will be visiting dozens of RealClassic readers all around the UK during June and July 2014, and camping in their sheds. You’ll be able to read all about it in future issues of the magazine, but you’re welcome to join him and Frank Westworth at Andy Tiernan’s massive great big Shed on Monday 7th July 2014. Light refreshments are likely (last time we did something like this, Andy was kind enough to organise a sandwich van), and this is also an excellent opportunity to admire the 80-plus old bikes Andy always has in stock.

You’ll find Andy Tiernan’s super-size shed in the middle of some marvellous riding country, at the Old Railway Station on Station Road, Framlingham in Suffolk, IP13 9EE. It’s just off the B1116, behind the Station Hotel, next to the junction of Victoria Mill Road, and there’s an excellent map and details at