Bill Wood took a real risk with his first Italian classic bike. A basketcase rebuild – and a really unusual model, at that. Is he please with the results?

About two years ago I purchased this Moto Morini, my first Italian motor cycle. The 1967 Moto Morini 250 GTI Settebello was in a poor condition and was really a loosely assembled basketcase. Six months later I had completed a full restoration. The engineer who did the main engine rebuild was a local ex-racing mechanic (Ray Spearman), who has done quite a bit of work for me in the past and is a very well respected engineer in all aspects of a motorcycling. After rebuilding the engine, which did not require a rebore, his opinion was that the engine was well made and designed, but over- engineered.

The 250 Settebello was based on the 175 which bore the same name (it means ‘Seven of Diamonds’ and stood alongside other, more softy-tuned models called ‘Trumps’ and ‘Three Sevens’). The 175 ohv Settebello was a 15bhp road-racer which itself was loosely based around Morini’s factory 125 racer. The 175 was a great success, using its pushrod engine to propel its 101kg to a maximum of 88mph. It was widely used across Europe throughout the late 50s and early 60s for track and hillclimb competition, carrying riders like Agostini to the chequered flag.

The later 250 might have been based around the same components as the 175 Settebello, but it was not by any sense a sporting machine. It was intended more for touring, hence the high handlebars, pillion-friendly saddle, deep valanced mudguards, ‘sensible’ silencer, leg shields and front crash bars (not all of which are present on this machine). The 250 was first offered for sale at the end of 1965, but was so different to the usual small, sporting Italian fare that it was dropped within a couple of years.

After I re-wired the bike most people said ‘what about those awful Italian electrics?’ I can say, with hand on heart, that the only problem I have had is with the ignition key switch. Every time I rode over bumpy ground it would misfire, and this was traced back to the ignition switch.

Like many Italian bikes built around this period, the ignition is switched on when you put the key into the switch. The key pushes a set of points together and therefore completes the electrical circuit. Sounds simple, and it is.

The problem is that the points are not held tightly closed to keep this circuit in operation, and therefore you get some misfiring, especially over rough or uneven roads. There is no adjustment to these points except by attempting to bend the long contact arm.

So my simple solution was to fit a slightly larger diameter key into the switch. Bingo! It works perfectly. I have also done this to my other Italian lightweight bike, a Bianchi Bernina, fitted with the same make of ignition switch. These keys are easy to make, being roughly like a round nail with a plastic tag. A friend of mine made one up for me in about twenty minutes. 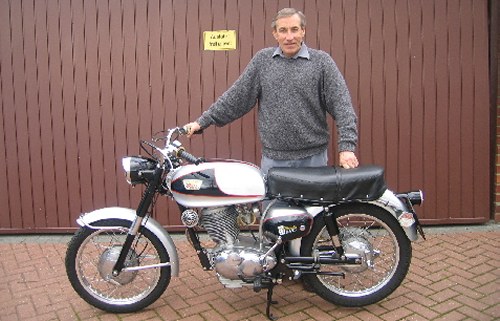 So, how does it go? Well I was quite surprised. It starts first or second kick from cold and ticks over like a watch. On the road it rides like most small Italians of this period — good. The brakes are very good and predictable. Over uneven surfaces on a twisting road it shows its age. You would not expect a 60’s bike to perform like a modern one.

However, when compared to 60’s British lightweights, it is way, way in front. Firstly there are no oil leaks. The engine feels like a British 500, only it spins easier and the acceleration is sharper too. The gearbox is light as is the clutch. The downside for me is the riding position. This model was not imported into the UK, but was made mainly for the American market, hence the handlebars. The bike will cruise all day at 60mph and I’m told it will top out somewhere between 80 and 90. With the upright riding position, 60 feels just about right for me.

The test of how good a bike is, for me, is whether I would I buy another one. The answer to that question would be ‘yes’. However I would lay out a new riding position and would probably tweak the engine. These motorcycles were often used with a lot of success in Italian club races during the 60’s, easily topping 100mph.

Way out in front compared to Brit lightweights?