Yamaha’s 750-4 from the early Eighties was never top of the best-seller list, but then Jim Peace has never been one to run with the herd. He reckons you could go a lot further and do a lot worse…

I have to confess that I’d never heard of a Yamaha XJ750 Seca, until the day I bought mine. I went to visit this bike shop, deep in the Hampshire rainforest, simply because their adverts looked interesting. Also it was a nice day, and I needed to escape from domestic bliss for a few hours. I wasn’t really looking for a new bike, but then I saw it and was hooked. ‘It’ was a red Yamaha, with ‘Seca 750’ on the sidepanels, semi-custom styling, shaft drive, and a transverse four-cylinder motor. It looked about 20 years old and had Canadian MoT stickers. It also had a kilometric speedo, a stubby four into one exhaust, and was, frankly, scruffy.

I decided that if they’d give me £250 for the ancient Suzuki I was rattling around on, I’d buy it. They would. And I could pay by credit card, which isn’t real money of course. Deal done. It would take about a week to do the paperwork. I didn’t like to ask what I’d just bought so I went back for another look. Instinctively I knew I’d bought a good ‘un.

I decided I would use the time before I picked the Yamaha up to find out a bit more about it. I checked out the two ‘Guides’, one of which was then edited by two lovely people – ahem – not entirely disassociated with this website. The mags gave excellent reports on the bike but were concerned about spares availability. This is something I never worry about; the guys at MotoWard down at Rudgwick in Sussex can conjure up old Yamaha parts from nowhere. Or Belgium, possibly, much the same thing. During the time I owned the XJ, I also managed to find road tests – Brian Ashley, the www.MagazineMan.co.uk was very helpful here – and even service manuals.

I collected the bike at twenty minutes before midday, when I’d arranged the insurance change over. There didn’t seem much point in ringing Carole Nash again, so I sat on the bike with a cup of coffee going ‘Broom, broom’, as you do. Or possibly don’t. At noon, I fired it up, and eased out onto the road. The first few miles were country lanes, which gave me a chance to get a feel for the bike, but eventually I got to a bit of dual carriageway and gave it a good squirt. Bloody hell! The quarter mile straight wasn’t there any more and I was grabbing brakes, shifting down, and praying we’d make the left hand bend at the end. We did, just, thanks to the excellent front discs, and a tough gearbox. I was a bit more careful with the throttle after that.

The next few weeks confirmed that I’d bought a good motorbike. Unusual, possibly, and very annoying at times, but definitely worth what I’d paid for it. The cruising speed was only restricted by the upright riding position, which suited me fine. A couple of times I saw 160kph on the clock, that’s about a ton to us Brits, but by that time my arms were coming out of their sockets. This was on an autobahn, of course, mainly the M3 autobahn in Surrey.

And it handled. In spite of its weight, and shaft drive, it could be chucked into bends, and would power through safely. It took me some time to sort out the gear changing. I assumed that, being a shaftie, it would need the BMW technique of a slow, firm change. No way. The gearbox didn’t like this, and protested loudly. I tried making fast changes and got a slick, silent gearbox. The clutch was a bit heavy, though, so I tried to avoid traffic. 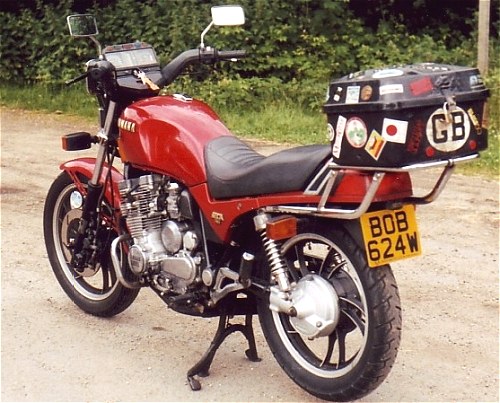 The styling of the Yamaha was not to everyone’s taste, being similar to the contemporary XV750 V-Twin, aimed at the American market.. The bike had a wrap-round rear light and plastic covers on the handlebars. I thought it looked good, but then I think all motorbikes look good. The bike had a revvy and, for its time, powerful four-cylinder engine, a five-speed box – thank goodness; I lose count after five – and the same BMW-derived shaft drive as the larger XS and XV models. Yamaha spoiled the plot, however, with three bits of silliness.

First, they put a second headlight under the main one. It wasn’t a riding light; this was an additional low beam which only worked with the main light on. It lit up the front mudguard, and not much else.

Second, they went completely over the top with a crude, and very heavy, ‘anti-dive’ system on the front forks. I suppose it was a good idea, but, on my bike, the roads of British Columbia hadn’t been kind to it and it didn’t seem to work. Even so, the handling was very good, considering it was quite a heavy machine.

Much worse than this, however, was the complicated electrical system, with a wiring loom about an inch in diameter. Many of the coloured wires had faded to grey, which didn’t help. Between the clocks was an LCD display, a sort of electronic check list of things like Oil, Battery, Lights and Prop stand. These lit up in turn and if something was wrong a red warning light started flashing. However, the Oil and Battery were only level indicators and nothing to do with pressure or charging; they often came on because the senders stuck. The oil sender could be freed by kicking the sump which nearly got me into trouble with the NSPCM.

You could turn the red light off by pressing a button on the console twice, but something would soon come on again. The whole display was invisible in bright sunlight, so I often missed the ‘Prop stand’ warning. I tried covering the lights with a strip of insulating tape, but then I started to worry in case something really was wrong. I spent a lot of time pressing that stupid little button. What with this, and trying to read the tiny ‘MPH’ figures on the metric speedometer, the whole system caused a lot of unnecessary anxiety.

On the plus side the engine was fitted with Yamaha’s induction control system, which helped to keep the carbs in balance, and, as a result, the engine was very smooth. According to the blurb the engine put out a respectable 80bhp, but figures, like size, aren’t always important. It’s the way the power comes in that matters and on the XJ it came in one long curve, with no power band and no flat spots. The bike was very economical, giving about 50mpg, with a good range, over 150 miles from full to reserve. The brakes were good, with twin discs at the front. The tyres wore a bit, but nothing to get upset about. 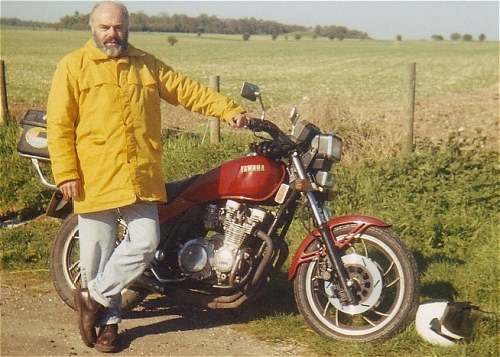 It used very little oil between changes, and the shaft drive gave no trouble at all. Unusually, for a shaftie, the back end didn’t lift up when moving off. I have heard two possible explanations for this. First, because the engine is transverse the drive has to turn through 90-degrees twice, which cancels out the torque effect. Second, because the shaft is on the left, unlike Beemers and Guzzis, the torque tries to force the back end down. Now, I’m dead gullible me; I’ll believe almost anything, and both of these explanations sound plausible. Personally, I reckon that my bike just couldn’t be bothered.

I did several long runs on the bike; it was one of the most comfortable machines I have ever ridden. I could cover long distances at legalish speeds without having to stop every ten minutes to sort out my neck, arms, back, bum, etc. My neighbour owns a purple Duprilia, or something; I know it’s fast because the speedo is calibrated in Mach numbers. The bars appear to be attached to the front spindle and he reckons he has to get off every half an hour to sort his bits out. This brings his average speed down a bit. Still, each to his own; he’s a nice bloke and his bike certainly looks the biz. I really must return his paddock stand sometime.

A few months after I bought the Yamaha I found an mph speedo at an autojumble, which cost £2 and actually worked. After another few thousand miles the camchain started to rattle, with the automatic tensioner at full stretch. The chain had already been replaced; a connecting link was clearly visible. I tested the link to make sure it was secure and it came apart in my fingers; the outer plate had simply been pushed on. Somehow it had stayed together. Nyaaagh!

I bashed the rivets over with a hammer and drift, not, I understand, the recommended method. I replaced the front slider, but on putting everything back together I over tightened the camshaft bolts, and sheared two of them off. When I tried to drill out the stubs I made a right pig’s ear of it, and eventually had to resort to oversize bolts and plastic metal. Then I retimed the valves using the ignition mark, not a good idea, and incurred a valve/piston interface situation. Surprisingly, after all that it still ran, but the camchain continued to rattle which meant replacing the rear slider, a fairly big job. By that time I had bought another bike, and lost interest. I sold the Yamaha to a breaker, a decision I now regret.

The XJ750 – various models were known as ‘Seca’ or ‘Maxim’ – was first introduced here at the same time as the ubiquitous Kawasaki GT750, also a shaft-drive four, but with more acceptable styling. The Yamaha lost out to the GT and not many were sold. Nevertheless there are still some around, and others have been imported. If you like older Japanese bikes a good one is worth looking at. In spite of its idiosyncrasies the Yamaha XJ750 is a very good bike.