To some folk, a classic bike is a precious thing to be cosseted and cared for. Steve Cooper of the VJMC argues that there’s room for the scruffy sort, too…

I recently encountered the legendary chap who has what appears to be the world’s most care-worn BSA Bantam. Sporting copious layers of hand-applied blue and red paint, this machine apparently defies all attempts by the various governmental forces to legislate it off the road. If the boys at Armoury Road were still making Beezers I wonder just what they would make of it. I suspect that, rather like Rolls Royce when made aware that a Scottish fishmonger was using an accident repaired Silver something or other as a pick-up truck, they paid the owner a significant amount of money to scrap the vehicle.

The issue here is that some companies really do not like to see their products in a state that they would term abused or misused. It’s suggested that it may be bad for the corporate image.

Within the VJMC we have several camps or schools of thought on what an owner should do with his or her bike. Some argue it should be cosseted and preserved, some suggest an occasional ride to shows, others restore a pile of scrap and then enjoy the bike on the road whenever they can. We also have a staunch hardcore who ride their bikes in as-used condition and only carry out running repairs.

I know of an early 1970s Honda CD175 that looks more than a little care worn around the edges but still delivers its rider safely to his destination with amazing reliability, but I doubt it would win any concours de elegance awards.

I’ve also recently encountered a Yamaha YPVS 350 that’s just knocked up 140,000 miles. Yes that’s 140,000 miles. Amazingly the owner has had the bike since it was six months old and thereby knows it intimately. In all this time it has only had once crank rebuild, a couple of rebores, brake pads, spark plugs and the odd wheel bearing.

Anyone is entitled to use their bike as they desire but only a pedant would suggest taking a machine that’s swallowed up countless hours and god knows how much cash and then riding it through a salt-laden winter. If that’s your bag then fine, but such a mindset seems perverse in the extreme. 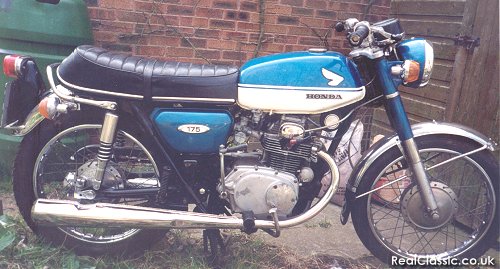 There’s still a school of thought that suggests Japanese bikes are impossible or virtually so to effectively repair after a major disaster. This writer knows of one Honda devotee who has resurrected a CBR250 that was written off for financial reasons. Rather than make yet another faux-Hailwood replica out of it he has managed to produce a thoroughly viable standard machine. Some dedication and bit of lateral thinking have got the little pocket rocket back on the road. It’s the sort of job that would surely win approval from Humbernut!

Some people seem to think that the VJMC is show obsessed and only focuses on shiny museum pieces — wrong! We showcase at the major shows because we know it’s what the public want to see. We have a very active strong riding base within the club and should you wish to become part of that scene you will always be made welcome.

See www.vjmc.com for details about the services the Club provides and how to join it